Radio, RFID tags and more can cause havoc with hospital equipment.

Do public-safety or maintenance personnel enter emergency rooms using their handhelds? Do ambulance personnel with 50- or 100-watt transmitters use their radios outside ERs? Is cell-phone use allowed near instruments? Do hospitals have protocols for transmitter use?

Times are changing, and hospital personnel should be aware of all the radio-frequency (RF) sources inside their buildings. Generally, cell-phone use is acceptable in patient rooms or within the ER, provided they are spaced one foot away from an electronic medical instrument. But what about all the other sources of RF that have crept into the hospital environment, including RFID, which is used to keep track of patients and to inventory prescriptions and assets? Have you considered the in-hospital RF paging systems? Or the medical and maintenance people who service the hospital using radios for communication? What about high-power cellular radios at 7-watt output authorized by the FCC in low-density-population areas of the country? Have you thought about RF therapy used for heating tissue and for surgery or external RF sources such as taxi and ambulance transmitters or broadcast stations? 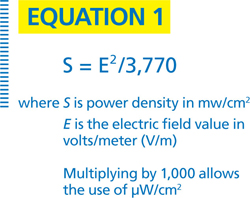 Depending on the attenuation of RF signals through building walls or windows, even an HDTV station within a few of blocks can jeopardize the hospital environment.

Many areas of a hospital are well-shielded from RF so that sensitive equipment has little susceptibility to radio transmissions. This extra shielding often is used to protect personnel and ensure the integrity of CT scans, X-rays, surgical theater equipment and other devices. But the rest of the hospital isn’t shielded, leaving much of it vulnerable.

Radiation studies are made by summing the power densities of all the RF sources near a medical instrument and comparing that sum to the standard to ensure there is no interference of a medical instrument that causes measurement errors, dispensment of the wrong quantities of a medicine or a total malfunction of equipment. It is of utmost importance that hospital personnel know the amount of RF radiation density in their facilities to avoid everything from small mishaps to potential catastrophes.

The methodology used for the calculation of power density is that used by the FCC to calculate power densities for hazardous radiation to human beings. It is described in the FCC’s Office of Engineering and Technology, Bulletin 65, August 1997. The simplified equation for power density calculation is shown in Equation 2.

As an example, assume that a hospital has a patient in the ER who is hooked up to an EKG test unit. A police officer enters and stands 12 feet from the instrument using a 5-watt UHF handheld radio. The hospital has an in-building, 2-watt paging system with an antenna mounted in the ceiling of the ER 10 feet away. Additionally, there is an ambulance just outside the ER entrance with EMTs telemetering data, using a 50-watt 463 MHz radio located 30 feet from the EKG meter.

To calculate the energy density at the EKG unit, each of the power densities is calculated using Equation 2 and summing up the RF densities to compare with the NLSME standard.

The contributions are as follows (rounded off to one-tenth):

Therefore, the total contribution by these RF sources is the sum of the three, PDΣ = 24.3 µW/cm2

If the EKG instrument just meets the NLSME standard of PDME = 2.4 µW/cm2, the instrument could have an interfering signal equal to about 10 times the standard.

The FDA has not defined a methodology for determining RF densities or for determining distances for multiple radiating sources, but it does have Table 4 on page 55 of Standard 60601-1-2 that shows recommended distances from an electronic medical instrument for single radiating sources. Although one cannot compare the FDA and FCC calculations directly, it appears the FDA distances are less stringent than those provided by the FCC formula. Therefore, the example is conservative.

This example could certainly be a cause for worry. It is important for hospitals to determine the RF density near their medical instruments, and hospitals need to set up the appropriate protocols to make sure RF does not interfere with any of their instruments or results could be costly.

James W. Hart, P.E., is an RF engineer working in the RF hazardous radiation field. He holds a BSEE degree from MIT and an MBA from the University of Chicago. Hart owns Hartech, an engineering consultancy. He can be reached at [email protected].