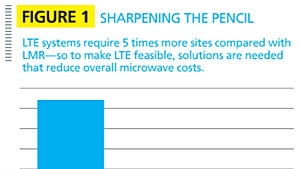 The fly in the ointment

LTE systems will require many more sites, and generate exponentially more data, than their LMR counterparts. This means backhaul will be both a significant need and a huge obstacle.

Like the interstate highway system in the 1950s, building out a national LTE infrastructure in the U.S. will be a major undertaking that will take many years to complete. The good news is that the technology for LTE exists today—we know how to build such networks today just as we knew how to build highways in the 1950s. The more important challenge is in planning, staging and deploying that technology at minimal costs with the highest reliability. Public-safety agencies ultimately will be challenged to build out LTE networks in the U.S. as cost-effectively as possible—and backhaul is a key component of the job.

We can use the interstate highways analogy to give this some additional perspective. Building systems to support a nationwide public-safety broadband network is similar to the concerted, 35-year effort spearheaded by President Eisenhower to build the national network of high-speed highways. It wasn’t the size of the highways that required more than three decades of work; rather, it was the number of highways that needed to be built, in a specific timeframe, to complete the system. Similarly, the network buildouts required to support LTE are not about the capacity needs of backhaul (as both microwave and fiber both exceed the capacity requirement), but rather the massive construction projects that will be needed to deploy the necessary backhaul solution. 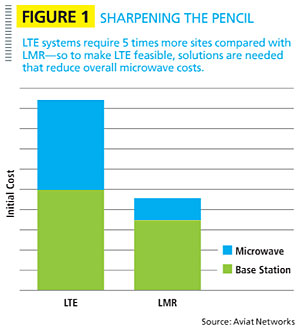 It is estimated that at least 100 Mbps will be required to backhaul LMR and LTE services over the same link, with microwave and fiber both providing this level of capacity. The backhaul also must provide quality of service (QoS) capabilities to discriminate between applications and to deliver the right level of service to each application.

Figure 1 further explains the LTE backhaul cost challenge by comparing total costs to cover a given geography assuming 5 LTE sites per LMR site. While the cost of a single LTE base station is much lower compared with LMR equipment, there are 5 times more sites needed for an LTE network, so there needs to be 5 times more backhaul links, which significantly drives up total costs. To make LTE possible then, from a cost perspective, solutions are needed to reduce overall microwave costs.

So, what’s required for LTE is a cost-effective microwave backhaul solution that minimizes construction challenges, and provides mission-critical levels of reliability. Easy right?

The microwave radio options for LTE include all-indoor, split-mount and all-outdoor radios. All-indoor radios are more expensive initially in terms of capital expenditures, in large measure because they usually need a more expensive waveguide to carry the RF signal to the antenna mounted on the tower, compared with the coaxial cable or Ethernet that is leveraged by outdoor radios.

All-indoor radios also are less expensive to expand and are more easily serviced than split-mount and all-outdoor units because the electronics are accessible without a tower climb. To add channels to an all-indoor radio, the technician simply goes into the cabinet and adds an RF unit. With an outdoor radio, however, the technician has to climb the tower, which can cost as much as $10,000. Further, when a new outdoor RF unit is added, it may require a larger antenna due to extra losses incurred by having to combine radio channels on the tower. A final related point that should be considered is that climbing a tower to service an outdoor radio can be problematic due to inclement weather, which decreases overall network availability.

All of this is important because the ability to easily increase capacity as demand rises offers the best total cost of ownership. Also, it is quite difficult to know how much capacity ultimately will be needed, as needs will change—often dramatically—over time. For instance, an agency might deploy one radio channel now with 150 Mbps of service but need to add another 150 Mbps channel in as little as six months. Consequently, a microwave radio system needs to be future-proof. To that end, when an all-indoor radio system is expanded, it is possible to run multiple channels over the same waveguide and antenna. In contrast, adding radios to an outdoor system in many scenarios will require a coupler, which introduces loss and necessitates a larger antenna.

To sum up, all-indoor radios provide the easiest maintenance, the lowest-cost upgrades, and the lowest total cost of ownership in LTE applications.

From a deployment standpoint, any microwave radio will require site surveys and engineering, path planning, and installation. It therefore is essential for operators to work with a technology provider that has strong experience in deploying microwave for LTE backhaul. Specifically, the backhaul technology provider should have:

Rolling out a new nationwide LTE network will require the deployment of new backhaul to thousands of cell sites, all within a very tight budget. In seeking a solution to the backhaul problem, public-safety agencies should look for microwave technology vendors that have extensive experience in successfully deploying their products in telecommunications networks. If microwave technology helps to address the cost issues of LTE backhaul, an experienced microwave vendor will solve the logistical issues in getting it deployed.