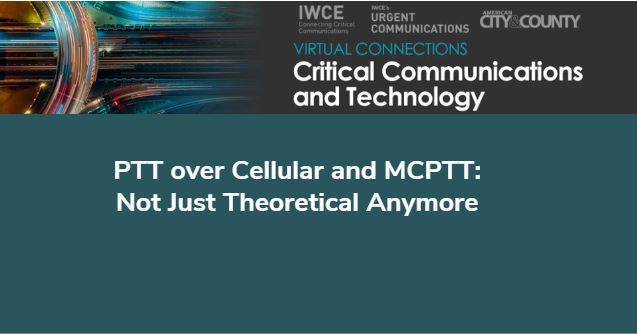 Public-safety speakers laud PTT over LTE ease of use, performance during COVID-19 pandemic

Ease of use, audio quality and cost effectiveness are key reasons why push-to-talk-over-LTE technology has become an accepted part of modern public-safety communications—although not at the exclusion of land-mobile-radio (LMR) voice—according to speakers from the EMS, fire and law-enforcement communities.

TJ Kennedy, co-founder of The Public Safety Network consulting firm and former FirstNet Authority president, said he believes the push-to-talk (PTT) functionality and redundancy provided through LTE reinforces the broader need for first responders to leverage public-safety broadband offerings from FirstNet and other carriers. Particularly during the COVID-19 pandemic, telemedicine, video conferencing and cloud-based solutions are demonstrating their value through all levels of public safety, he said.

“These things all really benefit from that broadband connection. So, it’s no longer an option; you have to have it,”

Kennedy made the statement this week during a webinar entitled “PTT over Cellular and MCPTT: Not Just Theoretical Anymore,” an archived version of which is available at the IWCE Virtual Connections portal.

“LMR is absolutely where it’s at for public-safety communications, at the moment,” Marani said during the webinar. “But PTT over LTE is a standard for me, and it’s quickly becoming at least some part of the standard for every public-safety network.”

Marani said the ability to establish interoperable communications through in a quick and cost-effective manner is key.

“If I can even remotely expect a call from a particular municipality, I’m ready with a donor radio to walk in, and it means I don’t have to immediately outfit everyone with one of the system LMR radios. That immediate setup is key for me—being able to respond to mutual-aid partners at a moment’s notice.

Frank Frievalt, fire chief for the Mammoth Lakes (Calif.) Fire Protection District, said his agency is working with LMR vendor L3Harris—using the over-the-top BeOn application for PTT voice—and FirstNet, Built by AT&T, to develop a hybrid system that lets users benefit from the best characteristics of both LMR and LTE technologies.

“You can’t rely 100% on one or the other [LMR or LTE], in this day and age,” Frievalt said during the webinar. “You’ve got to be able to do both, and this technology is emerging to do that.

“In terms of geographical coverage—especially in a rural area—if you’ve got 90% coverage on your LMR [system footprint], that’s pretty good. We certainly don’t have anything near that on your typical cellular [network, where coverage] is going to be concentrated near roadways and communities. But oddly enough, that’s where most of our calls are, as well.

After two “fairly extensive” field tests conducted during peak usage periods, Frievalt expressed optimism about the possibilities for all users in the region, which includes 11 fire districts that utilize six different LMR handheld devices and four different types of mobile radios. Frievalt has used a hybrid P25-LTE device from L3Harris and discovered that LTE was beneficial in practical use cases.

“I handled one of my busiest times here last Thanksgiving, and I never turned on the LMR side of the radio—I did everything on LTE, and nobody knew the difference,” Frievalt said. “But you do pull out of those areas in rural places where you don’t have the LTE coverage, and that’s why … you’ve got to have both [LMR and LTE].

“That’s why I see this as a transition technology. As far as I can tell, there are no early-adopter penalties, which is rare for technologies. And there is some real elasticity, in terms of how much you’re going to use LMR and LTE today versus how much you’re going to use it in six months, a year or two years. But I can tell you that changes are coming fast in my world.”

Guy Patterson, a captain in the Cranford (N.J.) police department, said his agency uses both LMR and LTE, but the circumstances are different than those faced by Frievalt’s largely rural jurisdiction. In a more densely populated area like Cranford, “cellular signal is not an issue” from a variety of wireless carriers.

Cranford’s police department is a FirstNet customer, and its users have noted the benefits of priority and preemption during some trying times that have created congestion on commercial network, Patterson said. On the push-to-talk front, Cranford personnel were allowed to trial FirstNet PTT—a new offering based on the 3GPP mission-critical-push-to-talk (MCPTT) standard—but the department currently uses AT&T’s Enhanced Push to Talk (EPTT), a carrier-integrated PTT offering that uses Kodiak technology owned by Motorola Solutions.

Patterson said PTT over LTE has been a valuable “backup” to LMR voice, particularly before the department replaced its aging, standalone LMR system with service from the statewide P25 network. Meanwhile, the fact that EPTT is interoperable with the LMR system has been extremely beneficial.

“All along the way, our end users here have seen firsthand how it’s just improving, and it’s made their work that much easier,” Patterson said during the webinar. “We’ve been using the LTE side and the push-to-talk side for going on two years now, and we’ve seen good success amongst all of our divisions within the agency.”

Kennedy said he believes these models public safety using both LMR and LTE technology should be a growing trend throughout the U.S.

“I’ve not found anybody who has said, ‘No,’ to that recently. I think that has become the new standard. I think Jeffrey [Marani] said it very well. That is the standard; that is the expectation—that everyone has a public-safety LTE device to be able to operate in, and that you have the opportunity to leverage that tool.

A key attribute of PTT-over-cellular solutions is the intuitive usability of smartphone applications, which are used by the public-safety community every day for both work and personal use—a fact noted by all panelists.

“The ability to say, ‘Oh, you’ve got a smartphone, great. Download this push-to-talk app,’ and now you’re building these communication plans on the fly [with] no FCC issues, no restrictions,” Frievalt said.

“You’ve also solved all of the other issues that trail a typical LMR rollout. Have you got the right charger? Have you got the right battery? Do you know how to use the device? Are you going to carry this brick on your belt, or are you going to leave it someplace? People have already sorted out all of those problems with their cellphones. If anything, their problem is that they’ve upped the use, and their battery runs lower. But they’ve got chargers [for LTE devices] in their glove box and their desk drawer, etc.”

From a performance standpoint, all panelists noted that over-the-top PTT applications exhibited some levels of latency when patched into an LMR system, with the delay often varying based on the robustness of backhaul between the LTE and LMR systems. However, even with the inherent delay associated with satellite backhaul, “the product is still very usable,” Marani said.

Meanwhile, all panelists lauded the audio quality from PTT over LTE offerings, even when being processed to work on an LMR network. When two users are both on PTT over LTE, the voice clarity is even better.

“ESChat, on its own, is absolutely crystal-clear digital audio,” Marani said. “It’s like I’m sitting next to the person.”

During the COVID-19 pandemic, PTT-over-cellular solutions have been used to enable voice communications quickly in temporary settings such as drive-through test centers and makeshift hospitals staffed by personnel that may be unfamiliar with LMR devices.

While such use cases display the benefits of PTT over LTE, there are questions whether financial problems associated with the pandemic—for governments, less tax revenue amid an economic shutdown—could limit the fiscal capability for public-safety agencies to invest in new technologies.

Patterson said he believes PTT over LTE typically will be more attractive to governments, because it can be funded through the operational-expense (opex) budget. However, that may not be the case for entities that already have made a significant capital investment in an LMR system.

“I think it depends on the specific agency’s circumstance. Is it a capital-budget issue where you have to do an entire system, where you’re dealing with consolettes in your dispatch center and everything else that goes into outfitting all of your personnel? The PTT over cellular is definitely going to be more attractive then, because there is going to cost savings … A lot of the costs that go into a whole new system like that won’t be there, when you’re switching over to the PTT.

“In our current situation—depending on where the economy goes and if there is an impact on the budget—our ability to use both technologies is going to be impacted. The radio system was a capital project; the money has already been spent, and the equipment is already here. Whereas the luxury of having the PTT backup, the interoperability and the ability to make sure that we’re constantly able to communicate, that probably would be impacted and not the LMR side.”

Kennedy said he believes the practical functionality of PTT over LTE—on full display during the COVID-19 pandemic—is great enough that agencies will be compelled to adopt the technology.

“The thing with public safety—and I’ve been in public safety most of my career—is they just want technology that works, and it [PTT over cellular] just works,” Kennedy said. “And the fact that is cost-effective, can be set up quickly and can be leveraged quickly … It’s very intuitive. There’s no telling somebody how to charge a smartphone. There’s no telling somebody how to turn it on. These are things they use every single day, and they have for years. There’s no learning curve.