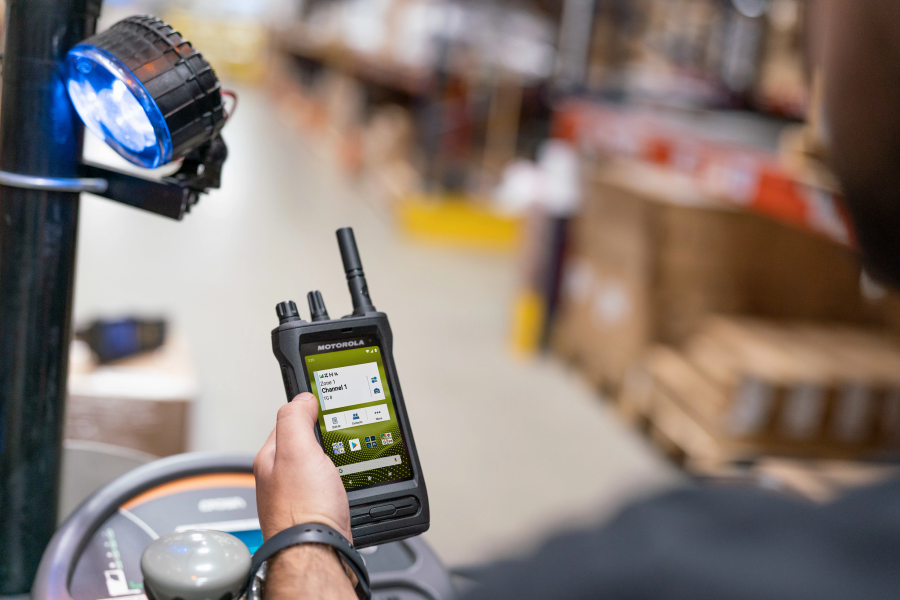 Motorola Solutions today announced the launch of the MOTOTRBO Ion, a “smart radio” that combines DMR narrowband voice capability with the broadband capabilities across carrier LTE, private LTE/CBRS and Wi-Fi into a rugged package that is designed to work in enterprise environments.

Carlos Camps, Motorola Solutions’ director of engineering, noted the challenges of supporting narrowband DMR and LTE broadband technologies in the same device without significantly compromising the performance level on at least one side, but he believes the MOTOTRBO Ion works well in both environments.

“Anybody can duct tape a cell phone to a radio and claim that they solved the integration problem, but that’s not what we did in this case,” Camps said during an interview with IWCE’s Urgent Communications.

“I personally have been involved in trying to overcome those tradeoffs for some time. What I will tell you is that what we have developed here is an absolute racehorse, and I think it is on both sides [the broadband and narrowband technologies].”

Motorola Solutions previously has included LTE in some of its LMR devices—a notable example being the APX Next—but they have utilized a closed Android operating environment with very limited access to applications. In contrast, the MOTOTRBO Ion includes a fully open Android application ecosystem, according to Camps.

“Bringing in open Android into what is traditionally a closed LMR voice network is not something trivial to be done,” he said. “There were a lot of tradeoffs and a lot of challenges that we had to work through to get that done, but we were able to bring a GMS-certified Open Android to this device that allows our customers to have access to any application within the Google Play store or any application that they have custom developed for their use.”

One key feature of the MOTOTRBO Ion is that it does not require users to manually toggle between the DMR connectivity and LTE-enabled features, such as WAVE push-to-X (WAVE PTX), Camps said. The LMR and LTE functions can be used simultaneously, he said.

“We’ve integrated our WAVE PTX technology into here, as well,” Camps said. “By leveraging an LTE modem that we have in this device that works both on public carrier LTE, as well as private CBRS, we can now map all of the voice seamlessly into the device without the user having to make any changes or to be aware of what bearer he’s on or what service he’s on.

“That is one large extension beyond what we previously had before. We’ve had different solutions with WAVE on different device, to be able to monitor and look at that. But what we’re bringing now is one device that can seamlessly roam from on site to off site, from LTE to private [LTE] to Wi-Fi to DMR, and have that continuity of our voice services and features all throughout.”

Of course, supporting simultaneous use of DMR and full-featured LTE represents a notable battery challenge, but the MOTOTRBO Ion comes standard battery that is designed to last at least 12 hours, or users can purchase a higher-capacity version of the battery, Camps said.

The MOTOTRBO Ion is an IP68-rated rugged device powered by the same Qualcomm chipset that is used in Motorola Solutions’ APX NEXT P25 radios, Camps said. The initial version of the device supports DMR on wideband UHF spectrum (400-527 MHz), although versions supporting narrowband VHF and 800/900 MHz  operation will be released in the future, he said.

In terms of broadband connectivity, the MOTOTRBO Ion has been certified for use by key North American carriers Verizon, AT&T and Bell Canada, as well as supporting CBRS, Wi-Fi and Bluetooth, according to Camps. Another version of the device is designed to work on LTE bands outside of North America.

MOTOTRBO Ion does not support 5G connectivity currently, but including this technology in the device is on the company’s roadmap, particularly as enterprises turn to private 5G solutions to support greater automated workflows, Camps said.

Motorola Solutions engineers faced significant design challenges to ensure that the higher-power DMR signals could co-exist effectively with lower-power broadband connectivity options like LTE and Wi-Fi, Camps said. And other design challenges had to be overcome as the MOTOTRBO Ion was developed, he said.

“This device, first and foremost, is a radio,” Camps said. “It is designed to work as a radio and have all of the dependability that our customers have come to expect.

“We’ve been able to improve on a certain number of performance items, such as gains in efficiency to improve the battery life to make up for the additional drain. We’ve been able to really work on reducing weight out of this device by using advanced manufacturing techniques and different materials that allow us to get to the ruggedness and rigidity that we’re looking for, without the heavier, traditional ways of getting to those outcomes.”

Available for order immediately, the MOTOTRBO Ion is being priced as the most expensive handset within the MOTOTRBO portfolio, but Motorola Solutions believes the flexibility of the device is compelling enough to attract customers, according to Camps.

“But where we think we have a big value proposition is, if you’re an end customer that buying a top-tier radio, a mobile device, a scanner, a tablet and a mobile computer, the total cost of buying that all of that technology—and probably the unseen cost of managing all of that technology,” Camps said. “The cost of ownership, I think, is going to be a fairly substantial improvement for a device like MOTOTRBO Ion. But it will cost slightly more than what our traditional radios cost right now.”