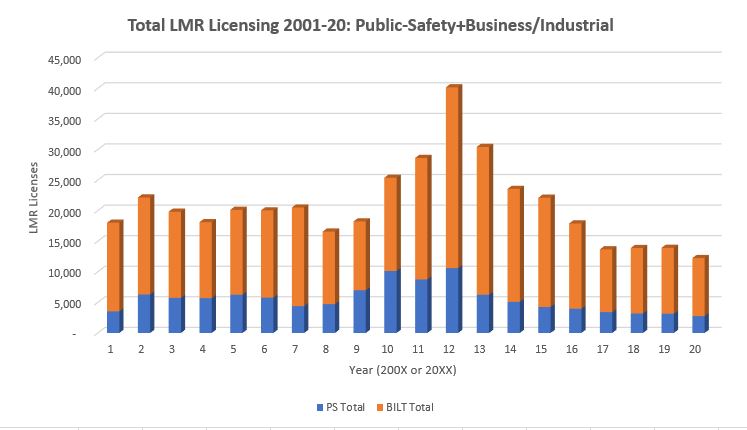 A recent law change eliminating a planned FCC auction of T-Band spectrum (470-512 MHz) resulted in the resolution of many pending LMR license applications from past years and provided an early boost to activity in the space this year, although those figures remain near the pace of all-time low levels once again.

For the first time in nine years, licensees operating LMR networks operating on T-Band airwaves last month were able to submit hundreds of license applications to the FCC to expand the coverage footprint of their systems and make other modifications with a reasonable hope that the applications would be approved. That’s because the FCC lifted its freeze on T-Band licensing activity in the wake of a law change in late December that repealed a 2012 mandate that T-Band spectrum be auctioned this year.

This action resulted in several T-Band applications in recent years—many from Los Angeles County, as part of the regional P25 public-safety system being built there—being rejected outright, as opposed to remaining in limbo as they had for at least two years in some cases. Most or all of those once-pending applications have been resubmitted this year, according to sources familiar with the situation.

Of course, the pent-up demand to make long-wanted change to T-Band systems generated a surge of LMR licensing activity last month, including 83 from Los Angeles County for its public-safety network submitted on March 22, the first day for T-Band submittal under the new rules. This injection of LMR license applications drove the public-safety total to 851 through yesterday—a pace that is ahead of last year but would be lower than any other year since the online ULS database was established in 2000.

During 2020, the public-safety and business-industrial sectors combined to file 12,244 LMR license applications. This figure represents a 69.5% decrease since the record year of 2012—acknowledged by most as an industry “bubble” driven by the FCC’s narrowbanding mandate during that year—and a 44.6% decrease in licensing activity compared to 2015.

Most industry analysts believe the COVID-19 pandemic significantly affected the 2020 LMR licensing numbers in the business-industrial sector, which was plagued by uncertainty and notable closures that reduced both the need for LMR communications and available funding to pay for system upgrades.

In contrast, the pandemic’s impact on public-safety licensing numbers was real—particularly in the spring of 2020, when some work was halted for logistical reasons—but not considered to be as great as it was on enterprises, given the lengthy planning and funding cycles for public-safety LMR networks, according to industry sources.

The maturation of push-to-talk-over-cellular (PoC) technology and carrier network options also is providing an alternative to LMR systems, particularly for certain enterprise sectors. At the moment, LMR technology—notably P25—continues to be the dominant push-to-talk platform for public-safety entities in the United States, although sources have cited anecdotal evidence of entities delaying long-term LMR decisions so they can evaluate PoC options like mission-critical push to talk (MCPTT) and private LTE networks.

Potential positive factors for LMR activity in 2021 include having the U.S. economy return to more normal activity, and multiple federal economic-stimulus packages. In addition, more T-Band activity also is possible. Existing licensees still have the opportunity to make changes to their systems, and the FCC could allow new licensees to create systems that operate on the airwaves, although that option likely would not be available until the second half of the year.

Another T-Band question that the FCC is expected to address is whether T-Band licensees will be required to meet the 2013 narrowbanding mandate that required other LMR systems operating on spectrum below 512 GHz to migrate from 25 kHz channels to 12.5 kHz—or equivalent—channels. If this occurs, a large system like the NYPD radio network would have to file new applications, although this action may not be executed this year.