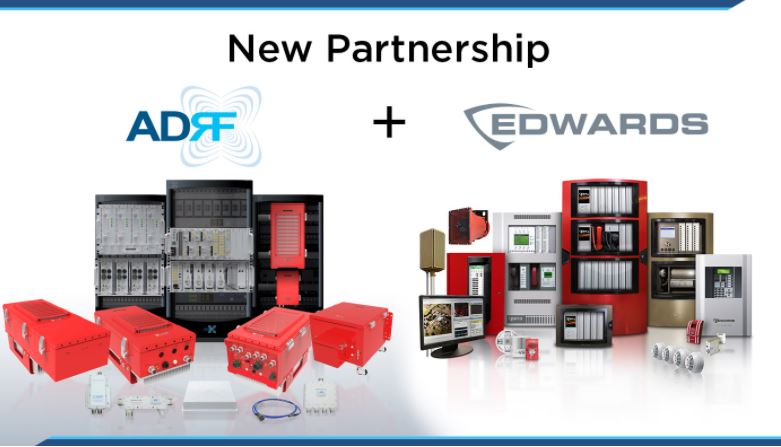 Jon Hughes, Edwards’ vice president of marketing and strategy, said the agreement with ADRF fits into the Edwards safety philosophy that is driven by the healthy-building initiative from its parent company, HVAC giant Carrier. Edwards sells fire panel, detection equipment and notification appliances under the Edwards or Kidde Engineered Systems brands, he said.

“We understand what it takes to have a high level of performance in emergency communications, so the fact that ADRF is in this space of in-building public-safety radio and the fact that they were actually the first to get a product certified for UL 2524 was very important to us in selecting a partner to get into the space,” Hughes said during an interview with IWCE’s Urgent Communications.

“This agreement with ADRF really extends the ability to offer more solutions to help with this objective of improving overall building health and safety, so it fits very nicely with what we do. The fact that first responders have a better way to be effective, to make sure that the communications are secure throughout the building, just builds on that life-safety focus we have to increase overall occupant safety while helping the first responders be more effective.”

John Shubin, ADRF director of sales, echoed this sentiment, noting that a growing number of cities and counties—also known as authorities having jurisdictions (AHJs)—are beginning to enforce NFPA and IFC fire codes for in-building public-safety communications more strictly than they have in the past.

“Communications for first responders is absolutely critical. Now, they’ve drawn that hard line in the sand in a lot of markets. They’re enforcing the code, whereas in the past, some [AHJs] would have a very relaxed spec.

“I hate to say it, but you might have ‘Two Chucks in a Truck’ rolling up and installing inferior equipment that doesn’t meet the code, and no one really questioned it. Now they are. Unfortunately, in certain scenarios, they had to learn the hard way. But now that they’re enforcing it, everyone can have that peace of mind that the first responders are going to be able to communicate everywhere throughout that building.”

For building owners, the strategic agreement between ADRF and Edwards means that they can have requirements like fire detection, fire alarms and public-safety communications done at the same time, which can enhance efficiency, according to Shubin.

“If you look at Edwards’ strategic partners that they work with on a regular basis, they’re already engaged with the AHJs—they’re already installing fire and life-safety systems in some very high-profile venues across the country,” he said. “It makes all of the sense in the world [to have them install ADRF gear]. They’re there, they’re pulling infrastructure for these fire and life-safety systems, they’re engaged with the AHJs, so it makes perfect sense for them to add public-safety [in-building communications] to the suite of offerings.

“Our partners have the ability to take the full range of public-safety emergency-communications product that ADRF provides and sell those into their projects. If they are looking to satisfy more of their end users’ need, they can do that,” Hughes said.

“That’s really what we wanted to find in a partner [like ADRF]—one that had a full range of solutions, listed in UL 2524, that our partners could go and have in their offering to take to market. And because our partners are in all of the major jurisdictions throughout the country, we do provide a very nice reach through all of those various types of buildings, whether it’s new construction or … in those areas where we see existing buildings being required to do it.”

For many years, ERCES rules typically were enforced only on new buildings that had to meet the requirements to get a certificate of occupancy. But that is changing in many cities, as more AHJs are mandating that existing buildings also meet the in-building-communications codes, according to Shubin.

“We all know what happened in Las Vegas several years ago—the largest mass shooting in U.S. history,” Shubin said. “First responders had a hard time communicating during that ordeal.

“Clark County was one of the first, and they drew that hard line in the sand. They did compliance testing on, I believe, 20 of these venues on the strip, and 16 of them failed. So they’ve really cracked the code, and they’re enforcing it on existing properties, as well now. They’re having these systems installed.”

ADRF gear also has been installed in “countless schools in Florida over the last 13 or 14 months, to the tune of hundreds,” Shubin said.

74% of Q1 malware was undetectable via signature-based tools dlvr.it/S2PfKg

What local governments can do to build better cybersecurity dlvr.it/S2PfDH