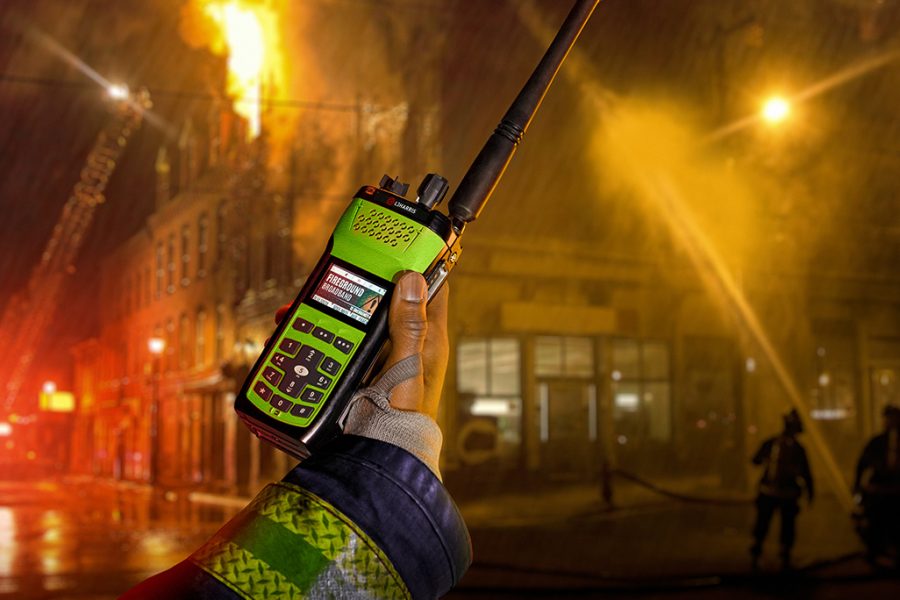 L3Harris Technologies today unveiled the XL Extreme 400P, a device that supports P25, LTE and Wi-Fi communications and is designed to meet the most stringent durability standard for first-responder handsets recently established by the National Fire Protection Association (NFPA).

Todd Perdieu, vice president of products and strategy for L3Harris, said the XL Extreme 400P represents the highest-tier portable within the company’s XL family of devices and is expected to begin shipping at the end of August. Although designed to meet the “unprecedented” ruggedness requirements of the NFPA 1802 standard for firefighter handsets—including a requirement to operate through a 1,700-degree flame impingement—the product also is expected to gain traction in other sectors, he said.

“The XL Extreme 400P is designed for those users that operate in the harshest of environments … we’re talking about the firefighters, the military and even the utility workers that find themselves in demanding environments,” Perdieu said during an interview with IWCE’s Urgent Communications. “Ultimately, what this product is bringing is new levels of safety into the marketplace for those who use the product.”

Don Griffis, principal product manager for L3Harris and a participant on the technical committee that created the NFPA 1802 standard, noted that the rigorous testing requirements also must be met by the new speaker microphone and cable, not just the XL Extreme 400P device itself.

“This entire solution—the radio, the speaker microphone and the cable—are all subjected to those extreme temperatures, the extreme drops, the tumble and the vibration [tests],” Griffis said during an interview with IWCE’s Urgent Communications. “They all have to survive all of those and beyond.”

Perdieu said that the XL Extreme 400P has passed all of the NFPA 1802 ruggedness and durability requirements—the ability to work in extreme heat, after being immersed in water and after surviving extreme impacts—in the company’s lab environment. However, no devices officially are compliant with the NFPA 1802 standard, because the compliance laboratory has not yet started the compliance testing process.

To meet the NFPA 1802 standard, L3Harris utilized “heat-resistant thermal materials, a reinforced watertight seal and unique thermal-rated displays,” according to a company press release. Both Perdieu and Griffis acknowledged the roles played by L3Harris personnel outside the company’s Public Safety and Professional Communications (PSPC) unit, particularly those familiar with the materials and engineering techniques leveraged to allow spacecrafts to survive the extreme heat associated with a spacecraft re-entering the earth’s atmosphere.

“We leveraged the breadth of L3Harris’ expertise in developing this product, combining the most advanced RF technologies used in military tactical radios, with product materials that allow space vehicles to survive the heat of atmospheric reentry,” DiCosmo said in a prepared statement. “The result is an extremely survivable, high-performing radio that the industry has never seen.”

Despite the implementation of such techniques to enhance the rugged nature the XL Extreme 400P, the device is able to provide both LMR and LTE connectivity effectively, Perdieu said.

“There is no performance degradation,” Perdieu said. “The LMR antenna is an external antenna, much like a traditional [LMR antenna], but it’s reinforced for thermal characteristics with material that’s more heat resistant. Our LTE antennas have been internal with all of our products, so it’s very consistent performance [with other L3Harris products], from an RF perspective.”

On the LMR side, the XL Extreme 400P supports P25 Phase 1, P25 Phase 2, EDACS, conventional analog and conventional P25 communications and can operate in the VHF, UHF and 700/800 MHz bands. On the LTE side, the device operates in 24 bands and has been certified by Verizon, AT&T and FirstNet to date, with more carrier certifications expected in the future.

One feature of the XL Extreme is the “black box” functionality that records the last 2,000 events executed by the device, as well as a full audio playback function for the last 5 voice transmissions that the device receives. As a software feature, this capability is expected to be integrated into other devices in the L3Harris portfolio, according to Griffis.

The XL Extreme 400P also will be able to support incident-command software from Adashi Systems that enable Personnel Accountability Report (PAR) checks and can be used to monitor the heart rates and ambient temperatures of firefighters, according to Perdieu.

Firefighter-service representatives have applauded all of the capabilities available in devices that meet the NFPA 1802 standard, but many have expressed concerns whether firefighting agencies would be able to afford handsets that meet all of the requirements. Perdieu acknowledged that the XL Extreme 400P will be the most expensive handheld P25 device from L3Harris for the first-responder market but said that the actual price of the units has not yet been determined.

“The pricing hasn’t been finalized yet,” Perdieu said. “But for those users looking for the highest standards and safety … [in] a radio and a speaker microphone—as well as incident-command software—we’re bringing a tremendous amount of value to this space, and I believe that users will find that value, see that value and welcome it.

“It is the highest tier, and the price will certainly be consistent with providing unique qualifications that really don’t exist in the industry today.”