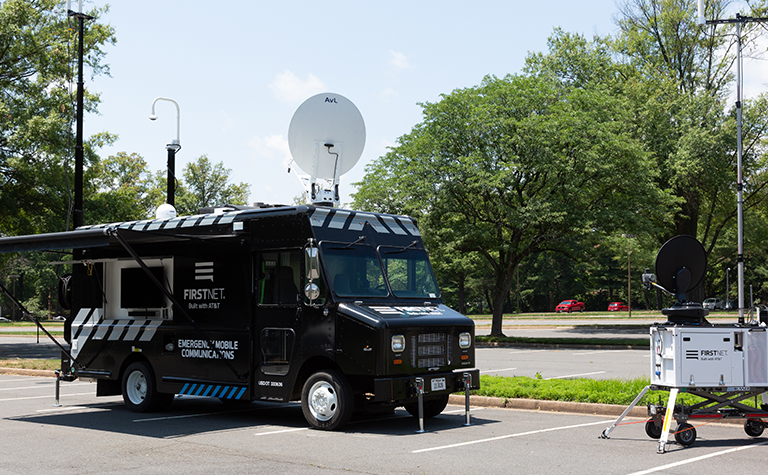 AT&T and the FirstNet Authority today announced the addition of 19 deployable assets to the dedicated FirstNet fleet of mobile LTE vehicles, with Communications Vehicles and Micro SatCOLTs providing different operational features and flexibility than was available previously.

“We’re working on new technologies into the next year already,” Scalera said during an interview with IWCE’s Urgent Communications. “The ROG [Response Operations Group] team is a front-facing deployable program, so we’re working on that and advancing it. I’m very excited that we’re going to roll these new vehicles out.”

Other new form factors in the FirstNet deployable portfolio are four Micro SatCOLTs, which are similar to the Compact Rapid Deployables (CRD) unveiled in January, but these will be owned by FirstNet rather than by first-responder agencies. These four Micro SatCOLTs are being located in western U.S. to support the 2021 wildfire response, as the agility of these assets are ideal for use in these environments, according to a press release from AT&T.

Two CRDs also are being stationed in the U.S. Virgin Islands. Those deployable assets will be owned and operated by wireless service provider Liberty, Scalera said.

Scalera said the four Micro SatCOLTs were funded by AT&T, while the other 15 assets were paid for by the FirstNet Authority through its reinvestment program. Approved a year ago by the FirstNet Authority board, the task order called for AT&T to make the deployable assets available to public-safety subscribers by June 30 this year—a timeline that will be met, Scalera said.

“Public safety identified mobile coverage as a ‘must have’ early in the development of FirstNet, and since then we have seen both an increased use of and demand for the fleet of dedicated portable cell sites. The FirstNet Authority is pleased to deliver on our investments to expand the fleet and provide more innovative coverage solutions to public safety.”

“When disaster strikes, FirstNet is there to support first responders—it’s as simple as that,” Porter said in a prepared statement. “We’ve expanded the FirstNet fleet to provide even more portable cell sites, as well as to introduce new types of assets to help public safety stay mission-ready. FirstNet is the only network that has assets fully dedicated to support America’s first responders, and we will continue to be at-the-ready for those who put their lives on the line to protect and serve their communities—no matter the emergency.”

Scalera expressed enthusiasm about the new FirstNet Communications Vehicles (CVs), which he said AT&T helped design with public-safety-communications needs in mind. Specifically, the CVs are smaller than SatCOLTs, which allows them to be deployed in a broader range of environments.

“To me, bigger is not always better, when you have to get it there, maneuver it, and get it into [constrained locations],” Scalera said. “It’s great to have a lot of features, but I want to get there and be operational for public safety, and that’s what we did with the design of these vehicles.”

Most importantly, CVs are designed to provide broadband connectivity quickly after arriving on scene.

“We can bring the signal up—because we’re pre-staged for it—instantaneously,” Scalera said. “Even when a SatCOLT gets there, it takes two hours to set up. We can be live [[supplementing]] in minutes until the SatCOLT arrives. I think that this is the next level of response—the commitment of FirstNet to public safety, that we’re going to be continuing to build on this.

“I think these Communications Vehicles can roll into the next level, and we probably will be launching some more in the future. I think that they’re the right way to go—one person can operate it.”

From a connectivity perspective, the new CVs support LTE, Wi-Fi and DirecTV video and broadband links, Scalera said. The deployable asset also is able to leverage a variety of backhaul options.

“It does multiple things. We can backhaul over wired Internet … We can actually backhaul it over our AT&T network through the Cradlepoint router, or we can backhaul it through the SDO over satellite,” Scalera said, noting that each CV also has an HPUE antenna to help strengthen the LTE signal back to the fixed terrestrial network.

Each CV includes room for two COML positions and four TV screens to display information, as well as a large screen embedded on the side of the vehicle that can be used to share information with responders or support mission planning sessions, according to Scalera.

“Any feed we take in can go on any screen inside the vehicle or on the large screen outside—the feed from DirecTV, the video from our camera, or anything that’s on a tablet or computer can all be shared inside or outside the vehicle,” he said.

In addition, the CVs are stocked with other communications equipment, including 20 phones, three Rapid Deployment Kits (RDKs), and a Mobile Broadband Kit (MBK) that is designed to provide ad-hoc in-building LTE connectivity, Scalera said.