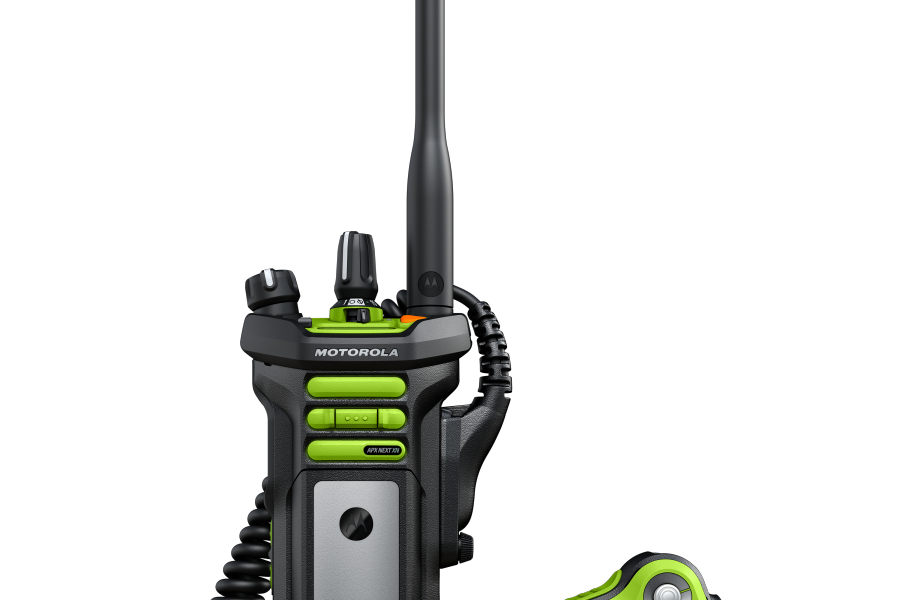 Motorola Solutions yesterday announced the APX NEXT XN, a new Project 25 (P25) radio that includes SmartConnect LTE functionality in a form factor that is designed to meet the “latest and greatest standards” for rugged and resilient fireground communications.

John Touvannas, Motorola Solutions’ director of product management, said the APX NEXT XN is the latest radio in the company’s APX NEXT family and has the same features as other devices in the portfolio, but the APX NEXT XN is designed to function even when put in some of the most extreme environments.

“When we launched APX NEXT, we launched the radio, but just as importantly, we also launched a platform. You’re seeing the realization of more products built on that same platform,” Touvannas said during an interview with IWCE’s Urgent Communications. “APX NEXT XN is a P25 mission-critical radio that brings those capabilities, including broadband, into this new form factor that is really designed to meet those stringent fire standards for heat, emersion and drop.”

“This radio is meant to meet some of the most stringent tests for the fire market, and these include tests that are above and beyond what fire products  have had to do [in the past],” Alazraki  said during an interview with IWCE’s Urgent Communications.

Scott Mottonen, senior vice president of Products, Motorola Solutions, outlined some of the tests that the APX NEXT XN is designed to pass.

“We conduct extensive research with firefighters—who face the most demanding conditions including extreme heat, almost no visibility and deafening noise all at the same time—and design radios to meet their unique needs,” Mottonen said in a prepared statement. “The APX NEXT XN thrives through our most rugged tests, including dropping it on concrete from nearly 10 feet when frozen or heated and multiple cycles of heating it to 350 F followed by submersion in cold water, while still offering the effortless usability on which first responders rely.”
Other tests call for the radio to function after being exposed for 10 seconds to a direct flame of 1,500 to 2,100 degrees Fahrenheit or for five minutes in a 500-degree oven, Alazraki said. Other tests require the radio to function after being tumbled in a machine 2,700 times in three hours, as well as withstand extended exposure to 350-degree heat and then immediately be submerged in water multiple times, he said.

Passing these tests and others are among the fire-radio requirements outlined under the NFPA 1802 standard that was finalized this year. Touvannas said he is not allowed to name the specific standard that the APX NEXT XN is designed to meet but noted that “we’re building the radio to meet the latest and greatest fire standards going forward.”

To meet the extreme ruggedness standards, Motorola Solutions engineers used the APX NEXT XE design as a foundation, then chose to utilize some high-temperature materials and some design modifications to ensure that the APX NEXT XN could function in some of the most extreme environments, Alazraki said.

“The fire-market radios that we produce are coming from a pretty high threshold already … they all from a land of rugged design for extreme environments,” Alazraki said. “This just takes it to another level to meet these more extreme set of standards.”

This robustness is not limited to the APX NEXT XN device itself, as the battery, antenna and remote speaker microphone all have to meet the same extreme-rugged standard. In addition, the APX NEXT software is designed to inform the user about the functionality of these accessories.

And all of this ruggedness in the APX NEXT XN will not come at the expense of a loss of functionality—the device includes a touch screen and a menu that users can control with voice commands, Touvannas said.

“The APX NEXT XN is based on the APX NEXT, so it does have the touch screen, the voice interactions, the mapping and SmartConnect failover for voice over broadband LTE,” Touvannas said. “What we brought to this space is really our latest platform, the latest interaction models that our customers are really familiar with.

“The VIQI voice control has been something that our customers rated really high—they really like to interact with the device eyes-up, hands-free for voice, being able to get into things like mapping, having the device report things like location events. So, all of that we brought to the XN radio, and we’ve been able to do it while still meeting the [standards requirements for performance in the extreme test environments].”

Although announced yesterday, the APX NEXT XN devices is not immediately available for purchase, and Motorola Solutions has not announced a timetable for its commercial availability, Touvannas said. The company also is not releasing any specific pricing information at this time, he said.

“It is an APX NEXT-family radio, so it’s certainly in our high-tier portfolio,” Touvannas said.