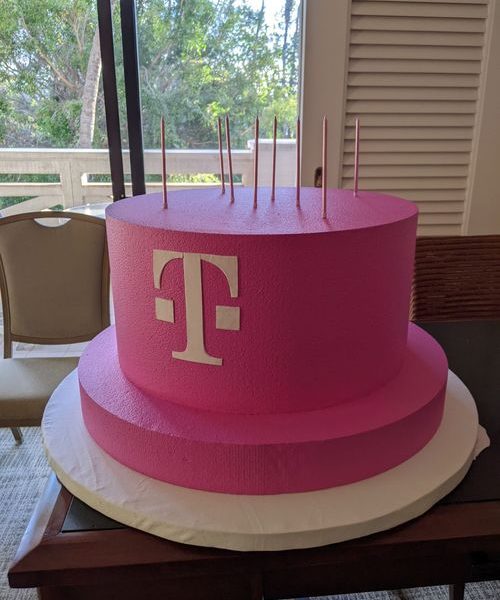 WAIMEA, Hawaii – T-Mobile once again brought a layer cake to a smartphone summit, but this year’s confectionery creation is shorter.

The dessert prop that the carrier has traditionally used to visualize a three-spectrum-band approach to 5G – a wide bottom layer for lowband spectrum, a narrower one above for midband, and a small top tier for millimeter wave (mmWave) – now features just two layers as displayed in T-Mobile’s suite at Qualcomm’s Snapdragon Tech Summit here.

In place of that mmWave top: eight candles, one for each city in which T-Mobile has deployed this fast but feeble broadband, which can top 2 Gbit/s but reaches, at best, a few thousand outdoor feet.

In a meeting here Wednesday, T-Mobile network-technology SVP Karri Kuoppamaki allowed that mmWave 5G could still help drive localized applications like factory systems but brushed it off as a solution for consumer mobile devices.

“Because of the limited coverage that it provides, it’s very hard to support mobility applications,” he said. “We’re now focusing on continuing to build out on the midband layer.”

That clashes with the message from Qualcomm at the summit, at which the San Diego firm introduced its Snapdragon 8 Gen 1 platform for Android phones.

In a Q&A session Wednesday, Amon outright labeled mmWave inevitable for bringing sufficient wireless broadband: “Knowing that this needs to happen, it will happen.”

T-Mobile, however, regards midband 5G – its 2.5 GHz spectrum routinely delivers 400 Mbit/s connections – as not just good enough but great enough to do that job.

And the company also sees the spectrum it inherited from Sprint as a durable competitive advantage over AT&T and Verizon, which won’t have their own midband service until they can light up the C-band spectrum they bought at auction.

T-Mobile hit its 2021 goal of covering 200 million Americans with midband 5G in mid-November.