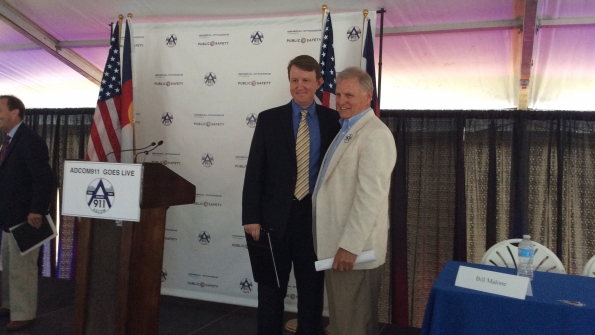 One Adams County resident that will benefit from the system is Jeff Bratcher, the new FirstNet deputy chief technology officer (CTO) who has followed the developments associated with the Adams County LTE system for years as a member of the Public Safety Communications Research (PSCR) staff. With the PSCR labs and FirstNet’s technical headquarters located in Boulder, having an operating public-safety network nearby to provide real-world data and experiences will play a critical role in the technical development of the nationwide broadband system, he said.

“I personally look forward to leveraging the lessons learned by this ADCOM911 system as we? are developing our nationwide plan and approaches for FirstNet,” Bratcher said.

Providing vendor support to the network is General Dynamics C4 Systems, which purchased IPWireless—the original LTE vendor for Adams County—in 2012. As a condition of the federal grant funding and the spectrum-lease agreement with FirstNet, the Adams County system must work seamlessly with FirstNet’s architecture.

Such interoperability with FirstNet will be achieved, thanks to the approach taken in the deployment of the Adams County network, according to Chris Marzilli, president of General Dynamics C4 Systems.

“By following an open-source model, we’re able to provide you with a standards-based technology that allows for interoperable communications with other first responders through the network nationwide,” Marzilli said. “That means that our technology will work with other technology—there’s no vendor lock-in at all.

“The work is obviously not yet done, but today is an important step forward to securing the network of the future for first responders throughout the nation.”

There is one other active public-safety LTE network in the U.S., in Harris County, Texas. Harris County has been in spectrum-lease negotiations with FirstNet for more than a year, but no deal has been reached. No other public-safety LTE networks are scheduled to be deployed this year, but several BTOP recipients are slated to complete systems in 2015.