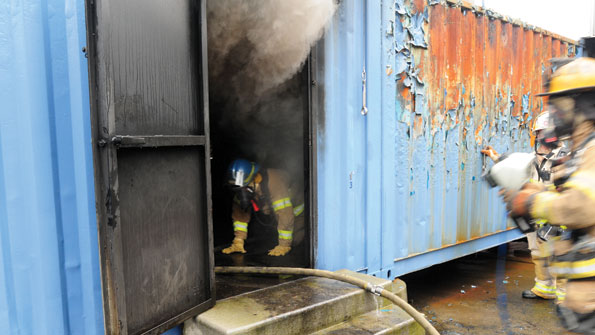 FirstNet engineers learned a great deal from the training exercises, but the most valuable aspect of the experience may prove to be the 11 hours each one spent overnight in a local fire station.

"What was eye-opening to me was, after the simulations, each of us was actually sent to a station," Suh said. "That's when you get the downtime, and it's really informal, relaxed, so you get to chat with the firefighters and first responders."

What Suh discovered was that many firefighters and EMS personnel are using personal devices to access applications and information that help them perform their jobs better.

"One, it's a testament of how committed these guys are to the business that they are doing," Suh said. "Two, from a FirstNet perspective, [it speaks to] the opportunity that we have: to provide for them the tools and solutions in a way to [give them] better information and better data to their jobs more quickly and more effectively.

"It was kind of a 'wow' moment for me, because I didn't know they were doing that so often."

Cooper said the experience of spending a night in a fire station gave him a "new appreciation" for what firefighters do, including their cooking skills — "We had a great dinner" — and their ability to wake up quickly several times per night to answer calls.

More important, Cooper said he plans to continue learning from his one-night cohorts, so he can better integrate the first responders' needs into the engineering designs that come from FirstNet.