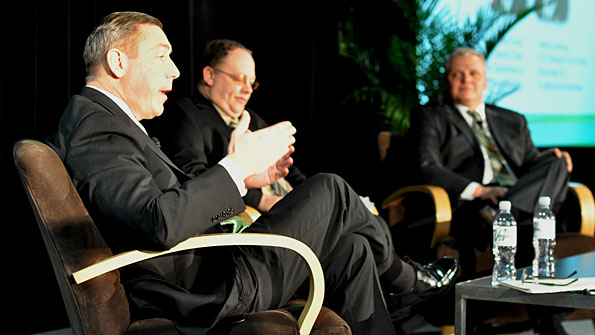 LAS VEGAS — Speaking during a roundtable discussion yesterday at the International Wireless Communications Expo (IWCE), FirstNet board members Charles Dowd and Jeff Johnson said that the organization expects to name a general manager in the next week to 10 days. Fellow board member Craig Farrill has been serving as acting general manager since December.

Dowd said that FirstNet received 30 applications. Dowd didn't share much about the vetting process, but he said that the applicants represented "a good depth of talent" — talent that would be helpful to FirstNet in staffing roles other than general manager.

"We don't want to tell the general manager who he wants to hire, but we certainly would want to see that general manager looking at some of these other folks, because there's a lot of ability there that we want to take advantage of," he said.

Although the FirstNet network is designed to meet the needs of first responders, the general manager won't necessarily come from the public-safety sector.

"Did you have to have a public-safety background [to be considered for the general-manager job]? No, you didn't," he said. "Obviously, that's an advantage. But obviously those who have built networks of this nature also have a unique position in this."

During the wide-ranging discussion — moderated by Urgent Communications editor Donny Jackson — Johnson stressed that the network would be public-safety grade.

But access to this public-safety network won't necessarily be restricted to first responders, according to Johnson.

"The law actually says 'public-safety network,'" said Johnson, who is CEO of the Western Fire Chiefs Association. "But this board is choosing to interpret that pretty broadly. When I respond to a hazardous materials call on the freeway, that involves the highway department, and there's lots of interaction. Getting those traffic-camera feeds directly to our apparatus helps us make all sorts of decisions. That's just a single example.

"Whether [the network] is broad enough to include utilities, transportation and public works, I think this board is seeing it as the broader public-safety community, and not just the people who spray and shoot and get shot at."

Dowd, the deputy chief of the New York City Police Department in charge of its massive communications system, agreed.

"The ability to set partnerships with utilities, and they become almost a first responder or a second responder in support of first responders, is going to be hugely helpful," Dowd said. "You want to ensure that they can get their job done and that you can communicate with them efficiently during [disasters].

"If you look at any hurricane scenario in an older city like New York, there are overhead wires everywhere. A huge piece of our puzzle is deciding whether those wires are dangerous. Police and fire need the support of utilities to address that. And then you have trees down everywhere. The department of parks has teams going out, and they have to be able to communicate with first responders in order to prioritize which of those tree-down jobs they have to get to first."