FirstNet’s Kennedy highlights progress made during the past year

FirstNet Acting General Manager TJ Kennedy noted advances made within FirstNet and the public-safety-communications industry during his presentation at the Association of Public-Safety Communications Officials (APCO) conference in New Orleans. 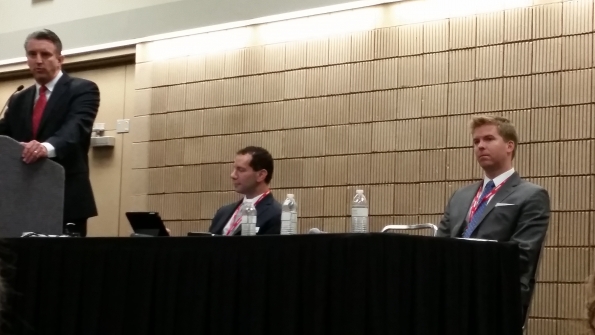 FirstNet’s Kennedy highlights progress made during the past year

When FirstNet’s Acting General Manager, TJ Kennedy, arrived in New Orleans for the Association of Public-Safety Communications Officials (APCO) conference this month, he brought with him several key FirstNet staffers and an enthusiasm for the progress—within FirstNet and the industry—made since the last APCO conference a year ago.

That headway was visible on the showroom floor, Kennedy said. Several vendors showcased deployable solutions, including a public-safety deployable LTE solution from Nokia and Harris that was announced at the show.

Some of the FirstNet personnel who participated in discussions at the show included Deputy Chief Technical Officer Jeff Bratcher, Director of State Consultation David Buchanan, Director of Outreach Amanda Hilliard and Director of Government Affairs Ed Parkinson, who described the first-responder broadband system as a rare opportunity for public safety.

Despite the developments over the last year, many of the questions poised to Kennedy at the town hall revolved around a fundamental, and familiar, theme—a sense of timing.

“A question I get a lot is, ‘When is FirstNet coming to Mobile?’” said Eric Linsley, director of public safety communications for Mobile County, Ala. “My standing joke is, ‘Well, six months.’ It’s a perpetual six months—it hasn’t started and it hasn’t ended yet.

“It’s a legitimate question from a police chief, from a sheriff (who) wants to know if it’s going to built out east to west, from north to south? Is it going to the big cities (first)? But when is it actually going to come down to Mobile?

“I don’t know if you can really answer that, but maybe give us some kind of timeline. Five years? Seven years? It would be helpful.”

FirstNet officials have said that a clearer timeline should begin to materialize after a draft request for proposal (RFP) is issued early next year. Kennedy reiterated this, noting the RFP and state consultation processes would help that timeline take shape.

But Kennedy also added more in his response to Linsley’s question.