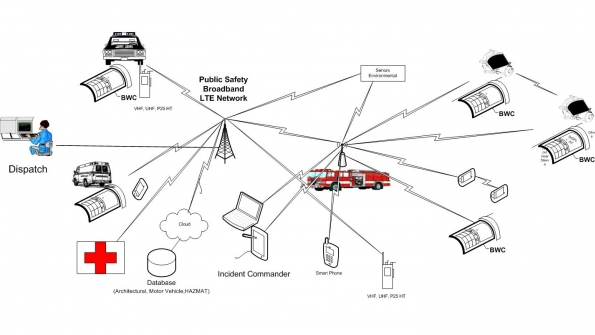 Click here to view this article as a PDF

The first-responder community in the United States soon will have a unique communication system placed at its disposal: the Long Term Evolution (LTE) wireless network that FirstNet is designing for public safety. The public-safety LTE network will use 10 MHz x 10 MHz dedicated broadband spectrum assigned to public safety in the 700 MHz Band 14 airwaves, which includes the D Block swath that Congress reallocated to public safety in 2012. The network will be a broadband communication system that can and will transform how first responders respond and work an incident.

So far, talk regarding the LTE network for public safety has been centered on the need to build this network and how it will be funded. But noticeably absent from most discussions to date is what the first-responder community will do with the LTE broadband network once it is operational.

One very important question that needs to be answered is: How will public safety leverage some of the vast capabilities that this new communication system can deliver? It is important that informed dialog about this fundamental question begin now, so public-safety entities can integrate these new broadband capabilities into its operations when the network is available in their areas.

This article will provide a glimpse into how Future First Responders (FFRs) can utilize the public-safety LTE broadband. When deployed, this LTE broadband network can and will improve response effectiveness through enhanced situation awareness and the vast array of communication enhancements that are possible.

In the article, we present a simple scenario to illustrate some of the communication enhancements possible with LTE. In the course of describing this scenario, a variety of communication-system improvements that can be achieved with a LTE system will be described. The situation described in the course of this article will not cover everything that occurs at an incident. The objective of this article is to help illustrate how the LTE broadband network can be used to help the Future First Responder at an incident.

Figure 1 also shows that the existing Land Mobile Radio (LMR) communication systems used today will continue to have a vital role in incident response. As embedded enhanced communication systems advance throughout the first-responder community, LMR systems either will play a secondary role or—in some cases—will be discontinued at some point in the future.

The Future First Responder (FFR) ecosystem in Figure 1 shows how Fire/EMS, Police, Department of Public Works (DPW), utilities and other agencies can all be integrated into a unified communication network. The unified communication network is enabled through the new LTE network, with its ability to provide broadband coverage to the edge of the network. For first responders, the edge of the telecom network is the incident scene itself.

First responders are all too aware of how complex and unpredictable incidents are. The complexity of responding to incidents continues to grow, thanks to the ever-changing environment that we are in. Proper training, equipment and effective communication let first responders handle the complex incident responses. All of those responding always need good communication for situation awareness. However, the amount of information that needs to be quickly processed by the incident commander and responding personnel to effectively respond, coordinate and resolve the incident with safety of life and minimizing property damage continues to grow.

Law enforcement has seen the most prolific acceleration of technology and advanced communications capabilities in the course of their daily job. Additionally, the improvements to medical responses also have many time-critical elements pertaining to improved diagnostic/treatment capabilities at the scene, as well as telemetry feeds while en route to the scene or transporting victims to a hospital.

Other agencies and departments are often involved during an incident response. These include DPW, Hazmat, public utilities, state agencies and—occasionally—federal resources. Therefore, the need to improve communication between responding groups—as well as affiliated groups, such as hospitals—is a challenge. Coordination with other first-responder agencies and a more integrated approach are needed.

The incident is a MVA situation that requires Mutual Aid (MA) from other districts and departments. The local Fire Department is responsible for fire and rescue operations and, in this scenario, is an all-volunteer organization with an unmanned station.