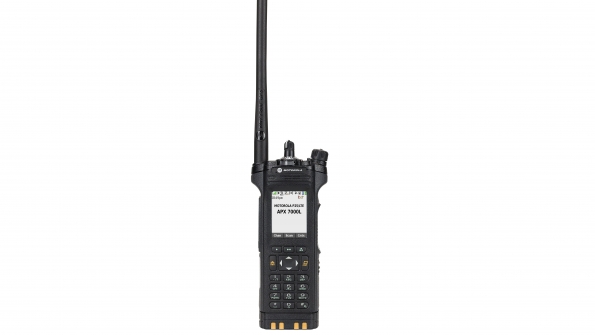 Other key data capabilities supported by the LTE connectivity include GPS location information and the ability to send and receive test messages and text-based database queries without being impacted by simultaneous voice traffic, Petersen said.

As an LMR radio, the rugged APX 7000L enables operation on P25 networks in the VHF and 700/800 MHz bands and has been validated at Federal Information Processing Standards (FIPS) 140-2 Level 3 for secure encryption, according to a company press release. The LTE module enables connectivity to the 700 MHz Band 14 frequencies licensed to FirstNet, as well as connectivity to the 4G network of at least one commercial carrier.

When roaming between LTE and LMR networks, APX 7000L users will maintain a continuous link, according to Petersen.

Petersen acknowledged that there were “design challenges” associated with enabling the flexible functionality of the APX 7000L, including the close spectral proximity—and overlap, in some cases—of Band 14 LTE and 700/800 MHz narrowband systems. Motorola Solutions engineers devised a way to enable simultaneous communication via an 800 MHz P25 network and a 700 MHz LTE system, but the initial APX 7000L does not support the same functionality with a 700 MHz P25 system and a 700 MHz LTE system, he said.

“If you are operating in the LTE band and are operating on the 700 MHz [LMR] band, there are things we do within the radio to prevent any kind of LMR voice and data [simultaneously] in the 700 MHz band,” Petersen said, noting that Motorola Solutions is working to resolve the issue. “The way we’re communicating this to customers is that this is really intended for those in the 800 MHz or VHF [narrowband spectrum].

“Now, you can disable the LTE modem and use the [LMR] radio just fine at 700 MHz; we didn’t disable that capability. But, if you try to operate both [LMR and LTE] at the same time, the radio will let the user know that you’ve got to make choice on what you want to do.”