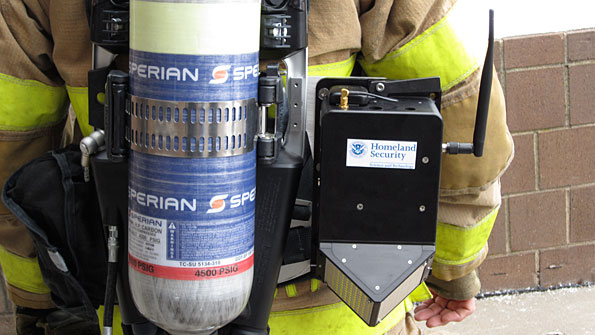 Expected to be commercially available next year, the GLANSER system may not be limited to just locating firefighters and other first responders, Mapar said.

"In addition to that, the unit is set up to establish a wireless mesh network all on its own — as soon as the unit is turned on, it starts to communicate with the other units around it," he said. "So, when people go into a building, each person becomes a node — and, in our case, the more the merrier."

The existence of that mesh network creates multiple communications possibilities for the future, including the potential exchange of data and voice information with additional enhancements, Mapar said.

One potential concern associated with GLANSER is its price, which currently is estimated to be about $3,000 per system — a steep figure for budget-strapped fire departments struggling to avoid layoffs. Mapar said that he hopes to convince manufacturers to build systems with GLANSER technology that are leased on a monthly basis, to help lessen the upfront sticker shock associated with an outright purchase.

An even more promising possibility is the chance that the GLANSER technology could be implemented in commercial devices such as smartphones and tablets, which would greatly increase the economies of scale for the components, which traditionally reduces their costs dramatically.

"We started with trying to help the firefighters," Mapar said. "But the technology we're developing is, all of a sudden, catching the eye of the commercial market.

"Some of the big names in the commercial market are watching how we go about putting this out, because they want to use some of the technologies we have developed. They're even thinking about providing it as a service in the location-based services area that promises to be a $5 billion-$10 billion market in the next five years."

Mapar is comfortable with such "unintended consequences" becoming reality, especially if they benefit public safety by reducing GLANSER costs and the location-based technology is used to better locate mobile 911 callers.

Meanwhile, the fact that solutions such as GLANSER are being developed for firefighting — a sector often ignored in previous mission-critical communications evolutions — is a welcome sign, Werner said.