Pepro announces the availability of its new 100-foot articulated lattice platform tower that enables quick deployment in even difficult environments and removes the need for potentially dangerous tower climbing, according to the company. 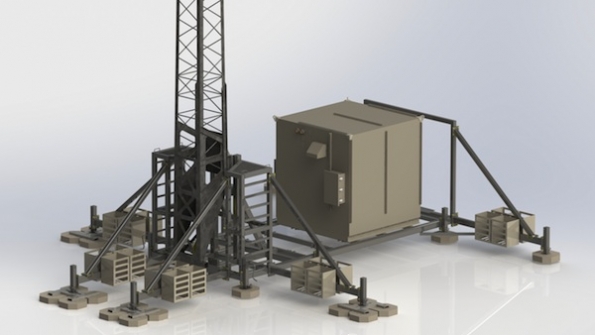 Pepro last week announced the availability of its new 100-foot articulated lattice platform tower that enables quick deployment in even difficult environments and removes the need for potentially dangerous tower climbing, according to the company.

Pepro has offered platform-based monopole towers that enable vertical separation of antennas, but they only reach a maximum height of 52 feet, according to Pepro President Kelly Lander. The company’s new platform tower offers these advantages while almost doubling the maximum antenna height, she said.

“With the lattice tower, it offers the ability to handle greater weight—more antennas, more payload—and it gives us that height advantage, as well,” Lander said during an interview with IWCE’s Urgent Communications. ”We can go up to 100 feet. This gets us up over most of the tree canopies that a lot of the federal agencies are confronted with, especially here in the East, and it offers the same advantages that our integrated fixed sites have. “It’s a standalone site, it doesn’t require any poured foundation, there’s very little to no ground disturbance, and it has the advantage of being able to install it within two days.”

Lander said the deployment time for the new lattice tower is a conservative estimate.

“There may be some cases where we can do it in a day, but we’re going on the safe side and saying two days, just so we don’t create any expectations that we can’t fill,” she said.

A key advantage of Pepro’s new lattice platform tower is that technicians can make adjustments to antennas on the tower without having to climb it—a feature that is particularly notable after the numerous tower-climbing deaths that occurred last year.

“With all of the recent press about the safety issues and the risks involved with climbing the towers, this tower does not need [to be climbed],” Lander said. “They do not have to climb the tower to adjust the antennas or replace the antennas; it can all be done from the ground. They would just lower the tower, and they’d be able to do any maintenance or required work on the antennas from the ground.”