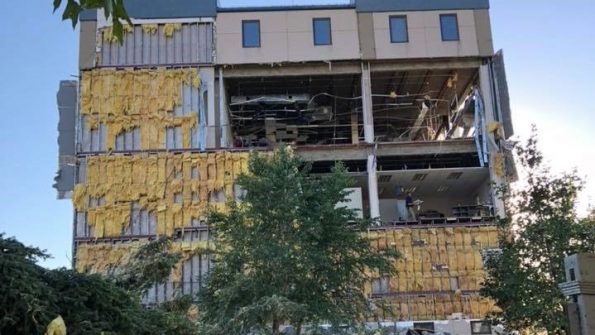 ​An EF3 tornado that hit Marshalltown, Iowa, last week caused significant damage to the city and wiped out much of the fourth floor of RACOM’s Marshalltown headquarters facility, but the LMR dealer’s P25 and EDACS systems continued to provide communications throughout the storm, according to RACOM CEO Mike Miller.

All RACOM employees escaped injury despite the devastating tornado that ripped through Marshalltown last Thursday afternoon, and RACOM’s network-resiliency efforts worked according to plan, with both the Harris P25 and EDACS systems maintaining communications to support local first responders, Miller said.

“You design your systems and you promise your customers that we’ve designed it to withstand a day like yesterday, and you hope like hell that you never have to prove it,” Miller said on Friday, July 20, during an interview with IWCE’s Urgent Communications. “Yesterday, we had to prove it. I’m proud that we were able to it and are continuing to do so.”

Miller said the third floor of RACOM’s five-story headquarters in Marshalltown houses the network core elements the P25 and EDACS systems that are used by multiple public-safety agencies in the area. None of the tower sites were hit by the tornado, so the ability for these core elements to maintain operation meant that first responders could continue using the LMR networks, despite the fact that tornado hit the RACOM building and caused a significant commercial power outage in the Marshalltown area, he said.

“The networks in the building serve all of the local first responders for an area of an 80-mile circle around Marshalltown—they all use that building for their network core,” Miller said. “They all worked, and they continue to work now.

“There is no commercial power in this area for about a 30-by-30 square-block area. We’ve got a 500 kW generator that’s been doing exactly what it’s supposed to do. It’s been running the whole time, so we’ve got power, air conditioning, Internet and telephone [communications].”

These communications and power capabilities resulted in the RACOM building hosting local dispatchers, who had to abandon the nearby public-safety answering point (PSAP) because of a gas leak in the 911 center, Miller said. A state-run facility answered local 911 calls, and dispatchers were able to work from the RACOM headquarters, albeit in a more rudimentary way than normal, he said.

“Because the radio system was up and working, the dispatchers came to our building,” Miller said. “We set up a couple of dispatch consoles in a conference room for them, and they dispatched from there for several hours.

“The dispatchers were talking on portable radios and control stations that we had set up for them. They had a white board that showed where everybody was, because they didn’t have their CAD system. They kind of did it the old-fashioned way—which was interesting to watch—from our building for about three or four hours.”

Miller was outspoken in his praise for the 75 RACOM employees, who have worked since the tornado to maintain operations at the company’s headquarters.

“It’s sort of humbling,” Miller said. “Some of these people live pretty close to here, so they have all of these problems—with their own house and their own vehicles—but they’re here today cleaning up, instead of being at their own house. It’s sort of emotionally overwhelming, to be honest with you.

“We’ve been cleaning up today, and we’ll be back to work as normal as possible on Monday.”

But last Thursday afternoon was anything but normal at RACOM. Miller said he—like many RACOM employees—had left the office early on Thursday to be with his kids, who were at his nearby home alone when news of potential storms was announced.

A total of 15 RACOM employees were in the headquarters building when the tornado hit Marshalltown at 4:40 p.m. and remained on the ground in the town for about five minutes, RACOM’s employees were safely sheltered in an interior room on the first floor of the building—the women’s restroom—where a familiar visitor also stayed to escape harm.

“Our UPS man was delivering packages, and he was the last one to get in the building,” Miller said. “Literally, he jumped out of his truck, ran to shelter in the bathroom with our folks, and the tornado hit 30 or 40 seconds later.

“I’ve got video-surveillance cameras that show the whole thing [click here to view video]. It’s an amazing video—from nothing [happening] to sides of a building are falling off.”