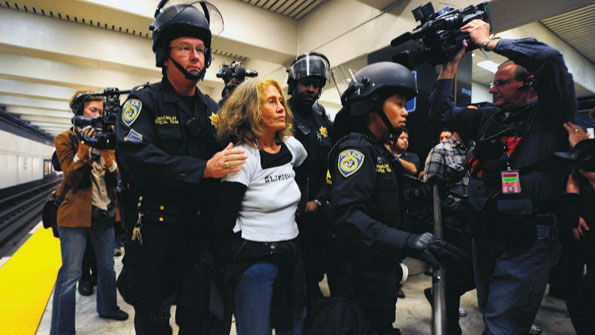 When the San Francisco Bay Area Rapid Transit (BART) decided last summer to shut down its private wireless communications network for three hours — in order to stave off planned service interruptions by protesters — it created controversy that continues today. Indeed, the action led the Federal Communications Commission to look into the matter. The ensuing open comment period closed last month with several organizations arguing for and against enforcement action.

In response to the shooting of a homeless man by BART police, protest organizers planned to disrupt transit services, and used mobile devices to coordinate their activities, as well as to communicate the location of transit police. Transit officials said in a statement that they were concerned a civil disturbance during commute times at downtown San Francisco stations could lead to platform overcrowding and unsafe conditions for customers, employees and demonstrators. So, the agency temporarily interrupted wireless service at select stations.

However, cell-phone service was not interrupted outside BART stations. In addition, numerous transit police officers and other agency personnel with radios were present during the planned protest, and train intercoms and courtesy telephones remained available to customers seeking assistance or reporting suspicious activity.

"BART's temporary interruption of cell phone service was not intended to and did not affect any First Amendment rights of any person to protest in a lawful manner in areas at BART stations that are open for expressive activity," reads a letter posted on the agency's website. "The interruption did prevent the planned coordination of illegal activity on the BART platforms, and the resulting threat to public safety." The letter was signed by Bob Franklin, president of BART's board of directors, and Sherwood Wakeman, the system's interim general manager.

In March, the FCC issued a notice seeking public comments about network shutdowns by public and private entities. In the notice, the commission wrote that wireless services interruptions are interpreted by the government as raising significant legal and policy questions.

"We are concerned that there has been insufficient discussion, analysis, and consideration of the questions raised by intentional interruptions," the notice read.

The notice explained that BART officials received credible information of planned lawless activity that they believed posed an imminent threat to its operations and placed its patrons at risk. The FCC further said that rail officials acknowledged that cellular communications for many passengers temporarily were interrupted while they were in certain stations and tunnels.

The commission in particular wanted to learn about other incidents where a wireless carrier interrupted its service for a limited time period at the request of a government agency, or had its service interrupted by a government agency exercising lawful control over the entity's network facilities. It also asked for relevant legal and policy guidance applicable to such events.

Several organizations responded, including CTIA, which said that open communications networks are critical to democracy and that the interruption of communications service must clear a high substantive and procedural bar. However, the association further stated that restricting wireless service may be an appropriate action in rare high-risk crises, but the action itself creates additional risks.

However, CTIA doesn't believe that the FCC should get involved, given that wireless-service-interruption protocols already are in place. For example, it pointed to the federal authority to shutdown wireless services in an emergency covered in the National Communications System's Standard Operating Procedure 303 (SOP 303), "Emergency Wireless Protocols." The NCS is an office within the Department of Homeland Security.

The American Association of State Highway and Transportation Officials (AASHTO) supports CTIA's contention that the FCC doesn't need to issue a rule-making in this matter.

An AASHTO special committee decided to comment because the FCC public notice addressed core safety and security issues associated with public transit, particularly in confined spaces such as tunnels and bridges, said William Brownlow, the association's telecommunications manager. This became particularly important due to the misinformation circulating about the event, Brownlow said.

The public perception is that BART stopped the transmission of cellular companies' signals; instead, the agency blocked the ability of patrons to receive the signals in facilities owned and operated by the transit agency. Commercial operators were contacted prior to the shutdown and reminded of the clause in their operating contracts in which the railway has the right to take such action as necessary to protect the public.

"The circumstances did not involve terminating or interrupting the private facilities of the wireless carriers," Brownlow said.

As an organization, AASHTO does not favor shutting down commercial wireless networks without reasoned evaluation of the public-safety circumstances at stake and believes such action should not be the norm. Yet transportation infrastructure is particularly vulnerable, Brownlow said. Terrorist attacks on mass transit and commuter rail facilities in Moscow, Madrid, London, and Mumbai — each of which resulted in death, injury and disruption — underscored the risk.

"All of those were coordinated through the use of cell phones," he said.

As a result, shutting down networks to disrupt nefarious communications is an important security tool. It should be noted that BART's purpose was to limit activities that posed a danger to other passengers using the system. Brownlow said that officials learned protesters planned to disrupt travel through the system by blocking tracks, causing disturbances and pursuing confrontations, all of which created a risk of injury, not only to the protesters but also to the public.

For example, protesters or patrons could have been struck by trains or come in contact with the electrified third rail. In addition, stopping or inhibiting train movement could have caused severe problems for a passenger experiencing medical distress because emergency response might have been delayed. Such response is a daily challenge for any large transit system, even without planned disruptions, Brownlow said.

Again, BART didn't violate its agreement with commercial carriers, Brownlow said, noting that none of the carriers were asked to stop transmitting from their over-the-air facilities; if the protesters desired cellular service, they simply could leave the rail system's premises.

"The agreements say they can disrupt service … they talked to the five carriers and they agreed it was a safety matter," he said. "They had no issue with BART [blocking] the signal for a temporary period of time. It was done to protect the innocent passengers on the train."

Brownlow said that critics of BART's action should consider the fact that outsiders planned to shut down its business for the day, and that the agency has a responsibility to protect its customers, in this case the public. Given this, Brownlow believes that BART had the right to protect itself and its patrons.

"We think BART made a reasoned decision based on the information it had," he said.

While AASHTO believes that the FCC's public notice served the purpose of establishing a record detailing the responsibilities of public officials and the complexities inherent in protecting the public, each incident should be judged on a case-by-case basis through SOP 303, Brownlow said.

"We do not think that the commission should proceed further and commence a formal proceeding," Brownlow said.