The impact of NTIA’s decision to put LTE on hold

After working feverishly for more than two years to deploy dedicated public-safety LTE networks this year, many early-adopter jurisdictions now are stuck in limbo. 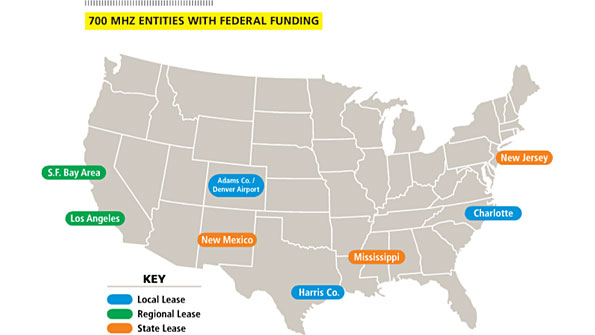 The impact of NTIA’s decision to put LTE on hold

One year ago, the future of public-safety broadband communications in the 700 MHz band was murky. First-responder organizations in the United States had rallied around LTE as the technology to deliver wireless broadband applications nationwide, and Congress had convinced the FCC to abandon plans to auction the 700 MHz D Block spectrum to commercial operators — but significant questions remained.

After all, getting an increasingly partisan Congress to pass any kind of legislation seemed a daunting task, but a law that would reallocate the D Block to public safety was particularly troublesome. Some first-responder representatives hoped that the 10th anniversary of the 9/11 terrorist attacks might spur lawmakers to take action, but that date passed with little tangible progress on Capitol Hill. Meanwhile, getting the billions of dollars needed to deploy LTE nationwide appeared to be an even tougher challenge, as lawmakers focused on reducing the massive national deficit.

But these pieces came together in February, when lawmakers passed a tax-cut bill that included D Block reallocation and $7 billion in federal funding to support a nationwide public-safety broadband network. While most agreed that $7 billion would not be enough money to fund LTE buildouts throughout the nation, public-safety officials celebrated the fact that the network would have a 20 MHz spectral foundation — the D Block plus the adjacent 10 MHz swath licensed to the Public Safety Spectrum Trust (PSST) — and significant investment from the federal government.

Today, all statutory milestones for the six-month period have been met, including appointment of the 15-member First Responder Network Authority (FirstNet) board and initial guidance for the National Telecommunications and Information Administration (NTIA) planning grants program.

Despite all of this progress, a cloud of uncertainty continues to loom over public-safety LTE at an industry level. It is unclear what the timetable will be for deployment of the nationwide network, with some speculating that widespread deployment may not begin until 2018. Meanwhile, several jurisdictions that expected to launch public-safety LTE networks with the support of federal funding this year are in limbo, basically awaiting direction from the FirstNet board and the FCC on their next steps.

Indeed, the considerable industry momentum surrounding public-safety broadband that was so noticeable early in the year effectively has been halted.

"I know there are a lot of things that FirstNet has to consider, but I hope they get this straightened out soon," one industry source said under the condition of anonymity. "Until that happens, they're killing the [public-safety] LTE market."