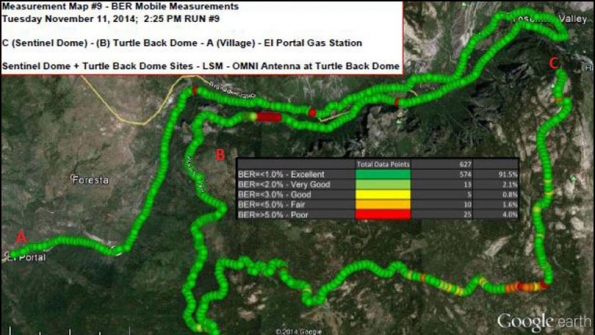 The engineering team proceeded to do coverage maps based on three separate transmitter locations. A temporary transmitter comprised of a vector signal generator with P25 1011 Hz bit-error-rate (BER) signal files and a 50-watt amplifier was sequentially moved from one location to another. Results showed that the reflections from the granite walls did not cause coverage holes.

Using a Land Mobile Radio (LMR) handheld analyzer, the team measured coverage of a variety of “temporary” simulcast system configurations to help decide on transmitter location, antenna pattern, and transmitter signal type. Through all these exercises, it was determined that the P25 system using LSM provided a significant improvement in BER and modulation fidelity compared to Continuous 4 Level FM (C4FM) modulation, especially in areas in which C4FM coverage and BER are marginalized. The only drawback to this modulation is that it requires more expensive, linear amplification.

The results of these tests allowed optimum selection of the two transmitter locations and modulation type by providing certainty of good overall BER coverage for the buses, achieving the overall goal of improving the communication system between the dispatch center and the driver. Another conclusion drawn was that simulcast BER test methodology is highly effective and allows network testing to be conducted without installing system infrastructure, saving considerable time and money.

Tom Brinkoetter’s extensive knowledge in the field of RF Test and Measurement comes from 40 years in test-and-measurement experience at HP, Tektronix and Anritsu. He has played a key role in the definition of Anritsu’s land-mobile-radio test product line.