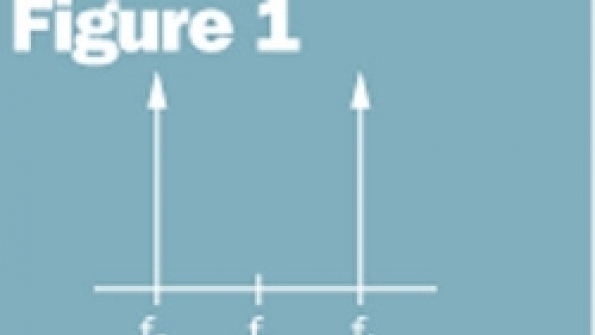 The next phase of modulation

OFDM is emerging as the choice for high-bit-rate services

All wireless communications systems use some form of modulation to convert a baseband waveform, such as voice or data, to an analog signal that can be carried over the airwaves. The most frequently used digital modulation in land mobile radio is a discrete form of frequency modulation called frequency shift keying, or FSK. 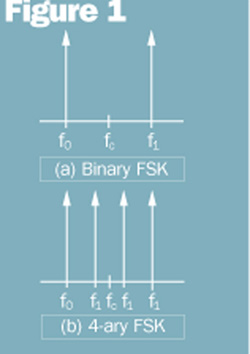 Communication theory tells us that the closest we can separate FSK frequencies at passband without causing intersymbol interference (ISI) is 1/Rs, where Rs is the channel symbol rate. Or, if the frequency separation is fixed, the symbol rate is limited to the inverse of the frequency separation. Practical systems find it difficult to achieve this theoretical limit, and it is common for FSK frequencies to be separated by more than the minimum distance.

We also can modulate bits onto discrete phase shifts, rather than discrete frequencies. The binary form of this modulation is called binary phase shift keying (BPSK). In this case, the signal is shifted by 0 or 180° depending on whether the incoming bit is a 0 or a 1. If four phases are used, the modulation is called quadrature PSK (QPSK). Generally, M-ary PSK modulation schemes modulate symbols of length log2(M) bits onto one of M discrete phases. In differential PSK (DPSK), each symbol is encoded onto a phase shift instead of an absolute phase. DPSK has advantages on fading channels where it is difficult for the radio receiver to track carrier phase. Differential phase is easier to detect on a fading channel. A 16-PSK signal constellation is shown in Figure 2(a). 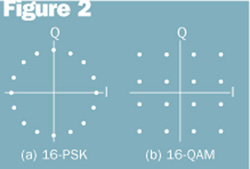 The reader will note from Figure 2 that M-ary PSK constellations have constant amplitude, at least at the sampling points. It also is possible to create constellations with multiple phases and multiple amplitudes. If these constellations are square, they are called M-ary quadrature amplitude modulation (QAM). A 16-QAM is shown in Figure 2(b). QAM constellations were first used in point-to-point microwave links, starting in the late 1970s. After techniques were developed to accurately track amplitude on time-varying channels, QAM began to appear on cellular radio systems, including Nextel’s iDEN air interface standard.

M-ary PSK and QAM constellations are popular on band-limited channels because they operate with multiple bits per symbol. The bandwidth of the signal is determined by the symbol rate, not the bit rate, so we can squeeze a higher bit rate out of the same bandwidth. The tradeoff is less power efficiency — higher-order constellations require more power to achieve the same bit-error rate.

Just when the world appeared to be moving toward spread spectrum, code division multiple access (CDMA) for all 3G wireless standards, OFDM got a foothold. It is now widely used for wireless data, just not on cellular networks. The reason is driven mostly by bit rate. Today’s wireless data services require high bit rates to emulate the quality of service found in landlines, e.g., DSL and cable. Spread spectrum systems operate at high chip rates, but process gain turns the high chip rate into a more modest bit rate. The cellular carriers are doing innovative things with CDMA to boost bit rates over 2 Mb/s, but today’s Wi-Fi radios already operate as high as 54 Mb/s (over short distances).

On an LMR channel, one of the toughest impairments to overcome is a smearing in time of consecutive channel symbols called delay spread. Delay spread is a consequence of multipath fading. Modern narrowband radios mitigate the effects of delay spread through the use of adaptive equalizers. An adaptive equalizer continuously measures the time-varying impulse response of the channel and attempts to correct it to a flat frequency response across the channel bandwidth. However, 802.11 radios currently operating at 4.9 GHz are broadband, and equalizers for broadband channels are considered by many to be either impractical or ineffective. (This view is not universal, however.) Instead, IEEE 802.11 radios use OFDM.

IEEE 802.11a and 802.11g radios employ OFDM with 64 carriers. Of these, 48 are used for transporting user data, and four are pilot carriers used for synchronization. Twelve additional carriers exist in an algorithmic sense, but have no power. They are needed to ensure the total number of carriers is a power of 2. Each carrier is narrow enough that the designer assumes the frequency response is flat; therefore, no ISI should occur.

802.11g radios employ algorithms for automatically adjusting the instantaneous bit rate to the measured channel conditions. The bit rate is adjusted by varying both the signal constellation and the code rate of an error-correcting code. Table 1 on page 45 lists the required signal-to-noise ratio for each discrete bit rate for an 802.11g radio. Note that Table 1 assumes static conditions. A time-varying multipath fading channel will put greater stress on the receiver, and performance will generally be worse for the same average signal-to-noise ratio. 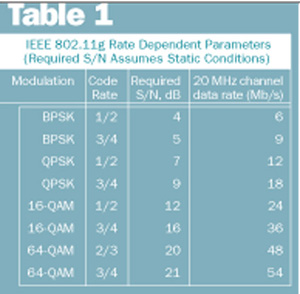