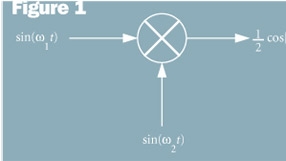 Tackling interference at the site

Transmitter, receiver and passive intermodulation are the primary culprits

Radio site co-location creates difficult interference problems. A site transmitter may operate with an effective radiated power as high as 3000 W, while site receivers must capture signals near the thermal noise floor. The power difference between transmitter and receiver can be as high as 200 dB. In most cases, the FCC limits radiated out-of-band emissions to no more than 60 dB of attenuation. The remaining 140 dB of interference rejection must be provided by the isolation inherent in the equipment and good practice at the site. Failure to adhere to minimum technical standards at the site almost certainly will result in harmful interference. This interference will make many receivers unusable and will desensitize others to the point where geographical coverage suffers.

We’ll first review the physics and mathematics behind IM interference and then examine the mechanisms that create each of the three types of intermodulation.

An IM product is a problem for the site only if some part of the signal falls into the passband of one of the site’s receivers and the signal has sufficient power to degrade receiver performance. Thus, we are interested in the frequency, bandwidth and power of the IM product. It turns out that IM frequencies can be computed easily with computer software, but IM power is quite difficult to predict.

The simplest intermodulation model assumes that two signals are multiplied in a non-linear device as shown in Figure 1.

Intermodulation products also occur in combinations of three or more frequencies. The number of potential IM products grows rapidly with increasing product order. Simply computing all potential IM products is a non-trivial task if done manually. For example, a small site with just 10 transmitters will have 159,720 combinations of up to three frequencies, 5th harmonic and below.

We also are interested in the power levels of IM signals. Only those products that are 6 dB below the receiver noise floor or stronger will cause noticeable interference. An interfering signal ƒ2 must travel from its source to transmitter ƒ1‘s antenna, down the transmission line and through bandpass cavity filters and ferrite isolators (if any) to reach f1’s final amplifier stage.

At this point, ƒ2 probably will see a poor impedance match and have poor return loss. The small signal that does get through to the final amplifier stage will undergo a mixing loss, and the resulting IM product will have a power level that is strictly less than the power level of ƒ2. The difference between the power level of ƒ2 at transmitter ƒ1 and the power level of the resulting IM product is known as the turn-around loss. Turn-around loss is sometimes referred to as conversion loss, but conversion loss also is equated with mixer loss, which does not include the effects of impedance mismatch that occurs when ƒ2 is offset significantly from ƒ1.

To illustrate this process, consider a simple example of transmitter intermodulation. Our site has two transmitters and one receiver, as shown in Figure 2 on page 38. 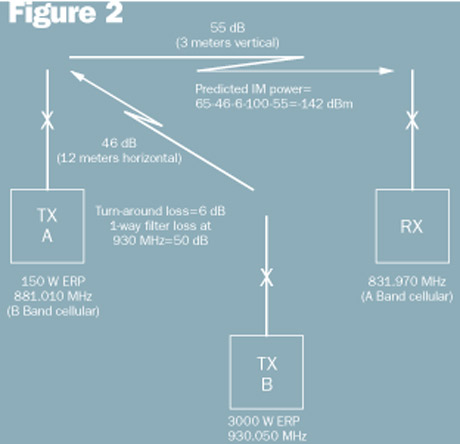 This product is more than 50 MHz from the TX A frequency, and the transmitter combiner in TX A should provide more than 100 dB of two-way isolation. When the antenna coupling losses, conversion loss, and filter loss are summed, the IM power at the receiver is -142 dBm, which is well below the receiver noise floor and therefore negligible (see Figure 2). Although this example had a happy ending, it illustrates the importance of bandpass filters on transmitters. Without the filter at TX A, the IM product would be -42 dBm and strong enough to wipe out the receiver.

There are two important types of receiver IM. In the first type, IM occurs between strictly external frequencies. The receiver simply acts as the mixing device. This type of IM is routinely measured at the factory for the third order, or 2ƒ1 – ƒ2 case (where ƒ1 and ƒ2 are external frequencies). This test is sometimes called the two-tone intermodulation test. The results of this test can be used to determine the third-order IM rejection capability of the receiver.

The key to eliminating receiver IM is to reduce the amplitude of interfering signals at the receiver front end. Cavity filters are the preferred tools, but sometimes antenna separation or other forms of antenna isolation are required.

Probably the most difficult IM problem is passive IM (PIM), which occurs when two or more frequencies mix in a non-active device such as an antenna, loose joint, mating between dissimilar metals, or micro gaps between metal surfaces. Often the culprit is an antenna, especially a transmit antenna because the high currents flowing in the antenna elements make it a more efficient IM generator.

PIM tends to be broadband, and it cannot be corrected with filters or ferrite isolators. Prevention is the best cure for PIM. One should use antennas and connectors with low PIM. DIN connectors are preferred over N connectors. All connectors should use linear materials such as silver, gold and brass. Avoid nickel-plated connectors. Remove unused hardware and transmission lines from the tower and ensure all mechanical connectors and tight and free of corrosion.

Jay Jacobsmeyer is president of Pericle Communications Co., a consulting engineering firm located in Colorado Springs, Colo. He holds bachelor’s and master’s degrees in electrical engineering from Virginia Tech and Cornell University, respectively, and has more than 25 years experience as a radio frequency engineer.