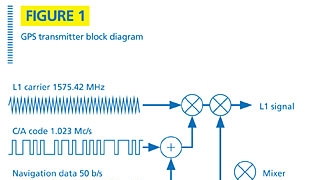 Navigation for the masses

From locating transit buses to timing traffic signals, GPS is a powerful tool.

The global positioning system, or GPS, is a satellite navigation system built by the Department of Defense and operated by the U.S. Air Force 50th Space Wing at Shriever AFB, Colo. GPS became fully operational in January 1994 when the constellation reached 24 satellites, the minimum number required for 24/7 global coverage.

Transit was a constellation of at least five satellites in low polar orbits (1,100 kilometers, or 683.5 miles). Each Transit satellite broadcast its orbital element set and a precise time reference every two minutes. Ground receivers used this information plus the observed Doppler frequency to compute positions on the earth’s surface.

Transit provided a position fix every hour with an accuracy of roughly 200 meters. Its main purpose was to provide updates for the inertial guidance systems in submarine launched ballistic missiles. Although the system worked well for its intended purpose, a system with greater accuracy and real-time positioning was needed to meet other DoD navigation and weapons requirements.

The first experimental (Block I) GPS satellite was launched in 1978. Ten more Block I satellites were in orbit by 1985 and the GPS concept was proved. In December 1993, the GPS achieved initial operational capability and the 24th satellite was placed into service in January, 1994. The GPS originally was intended exclusively for military use, but when a Soviet interceptor shot down a Korean Airlines flight after it strayed into Soviet airspace in 1983, President Ronald Reagan announced that the GPS would be available for civilian use once it was completed.

Ironically, the use of the GPS as a replacement for FAA ground radar and aircraft inertial navigation systems has yet to occur. However, GPS receivers are used in a plethora of civilian applications, including vehicle navigation, automatic vehicle location, ship navigation, cellular phones and base stations, land surveying, mapping systems, remote sensing, archeology, mining, wildlife biology, construction, public-safety simulcast systems, earthquake detection, agriculture, weather forecasting, traffic-signal timing, and search and rescue, to name a few.

Basically, GPS is a trilateration system, which first measures the distance from three or more emitters — each with known position — and then uses these distances to compute a position estimate. In the case of GPS, four satellites are needed for a unique 3-D position estimate. To understand why four satellites are needed, consider that the distance from a GPS satellite describes a sphere with radius equal to this distance. The trilateration problem reduces to finding the intersection of spheres. We know from geometry that the intersection of two spheres is a circle (except for the trivial case when the spheres meet at one point). For most practical cases, three spheres intersect at two points and four spheres intersect at one point. If the receiver knows its altitude, it is possible to compute a location estimate with just three satellites.

The heart of the GPS is a very accurate atomic clock which resides in each satellite. The precise timing provided by the atomic clock is needed because the GPS receiver cannot measure distance directly. Instead, it computes distance from d = ct where c is the speed of light and t is the measured time it takes the signal to travel from the satellite to the receiver. Because we are multiplying t by a very large number (c = 3 × 108 m/s), a small error in time results in a large error in distance. The atomic clocks used in the GPS system are accurate to within a few nanoseconds, equal to less than 1 meter in range. There are other sources of position error besides clock error, so most GPS fixes are not this accurate.

A full GPS constellation consists of 24 satellites in six circular orbital planes, each with four satellites. The orbital inclination is 55° and the orbital altitude is 20,200 km, or about 12,552 miles. The orbital period corresponding to this altitude is one-half sidereal day, or approximately 12 hours. Three or more satellites always will be visible from most points on the earth’s surface, but nearly all locations with see four or more satellites simultaneously. At present, the Air Force is flying 31 active satellites and two orbital spares, thus ensuring a robust constellation tolerant of satellite failures.

Each GPS satellite simultaneously transmits two different signals, L1 and L2, on two radio frequencies: f1 = 1575.75 MHz and f2 = 1227.6 MHz. These two frequencies are integer multiples of a base frequency, f0 = 1.023 MHz. The L1 signal is a spread spectrum, binary phase shift keying (BPSK) signal modulated by two pseudorandom codes in phase quadrature. The two codes are designated the coarse acquisition (C/A) code and the P code. The L2 signal is BPSK modulated by the P code only. The P code is encrypted and its main purpose is to prevent spoofing, which is the generation of false GPS signals by the enemy for the purpose of causing harm to friendly forces or to make weapons ineffective. The P code also has some inherent accuracy and anti-jam advantages over the C/A code. It only is available to authorized U.S. government users. 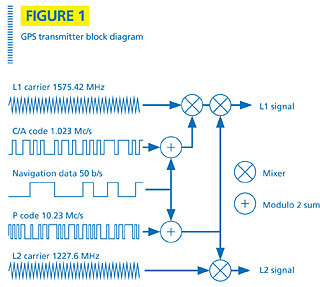 Each satellite has its own unique spread spectrum code, so signals from individual satellites can be separated in the receiver despite the fact that they exist simultaneously on the same radio frequency. This approach is called code division multiple access, or CDMA, and is similar to techniques used in some cellular phones. The GPS satellite signal includes navigational information on the ephemeris of the particular satellite and the almanac for all GPS satellites, along with parameters for correcting for ionospheric delays (one of many sources of GPS errors). The navigation information is sent at a rate of 50 b/s. The chip rate of the C/A code is 1.023 Mc/s. The chip rate of the P code is 10.23 Mc/s, making the process gain equal to 10,023,000/50 or 53 dB — probably the greatest process gain of any navigation or spread spectrum communications system. This process gain provides some measure of jam resistance, but GPS signals already are quite weak by the time they reach the earth’s surface, so GPS is not immune to jamming.

Because BPSK modulation is used, the nominal receiver bandwidth is twice the chip rate. Thus, the C/A code requires 2.046 MHz and the P code requires 20.46 MHz. Not all GPS receivers use the P code, so it is possible to build an L1 receiver with just 2 MHz bandwidth.

A GPS receiver is faced with many sources of error, including poor satellite geometry, satellite clock errors, receiver clock errors, ephemeris errors, ionospheric delay, and multipath delay. Modern receivers can correct for some of these errors and satellite health status is transmitted on the 50 b/s navigation signal, so information from unreliable satellites usually is ignored by the satellite receiver.

The accuracy of GPS can be enhanced through the use of a method called differential GPS (DGPS), which works by placing a GPS receiver at a surveyed location. The receiver then compares its known location to the GPS estimate. The difference between the two is the GPS error at that point using the particular satellites in view at that time. Provided the reference GPS is near the user’s GPS receiver, its errors will be the same as the user’s and a more precise location estimate results. DGPS requires a radio channel, usually in the UHF band, to distribute the GPS error information.

Another differential GPS system, the wide-area augmentation system (WAAS), is under development by the FAA and other agencies for the purpose of commercial air navigation. Under WAAS, GPS correction factors are distributed via geostationary communications satellites, thus providing the information over a much wider area than DGPS.