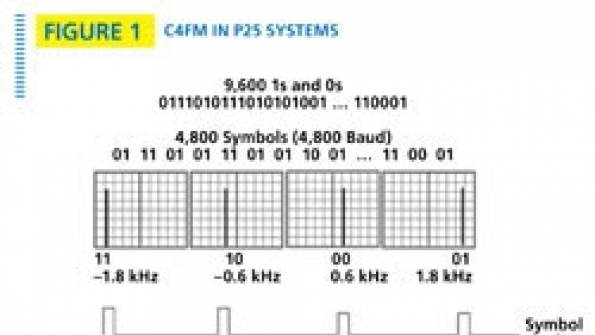 How to test a Project 25 system

Though they share the same common air interface and modulation, tests methods for conventional and trunked systems are quite dissimilar.

As Project 25 systems are becoming more and more prevalent across the United States and the world, many are wondering what methods should be used for testing P25 repeaters and mobiles/portables. The key to understanding such systems is an understanding of the differences between RF parametric tests and conventional and trunked protocol tests.

Regardless of whether the system is conventional or trunked, the P25 standard uses a common air interface or CAI. The CAI specification is highlighted in the TIA/EIA-102 BAAA technical standard and uses C4FM modulation, which is a four-level FSK modulation. Currently, all P25 systems are FDMA systems. However, Phase II systems will include TDMA technology. 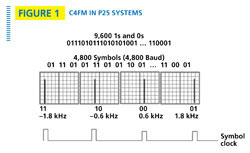 Figure 1 shows how C4FM works in P25 radio systems to transmit the digital 1s and 0s used to convey voice and messages.

Testing conventional or trunked systems requires the ability to analyze parameters unique to the C4FM modulation. C4FM requires that each symbol falls at exact deviation levels of –1800, –600, +600 and +1800 Hz respectively. Deviation levels are read at the symbol clock of 4,800 times per second. Since each symbol deviation equates to two bits of information, the symbol is called a dibit. Taking the clock of 4,800 symbols per second and multiplying it by two bits per symbol gives us the 9,600 channel bit rate associated with P25 systems. Both voice traffic channels and control channels use this same modulation.

Because we are concerned with the digital aspect of this modulation, we need to understand what parameters are critical to test. Frequency error and power levels are obvious tests that most engineers and technicians understand from older FM analog systems. However, since P25 uses fixed deviation levels, modulation accuracy is tested using different methods compared with FM systems. While analog FM also uses deviation measurements, P25 requires tests that can analyze the four levels of FSK at symbol clock time. This is the critical difference compared with FM modulation analysis.

We need to know how accurately each symbol deviation is hitting their respective frequency, so the first measurement we need to check is symbol deviation accuracy. This requires that we look at the deviation level at the symbol clock time. If there is any error in the deviation at symbol time, then the effective range or coverage of the P25 network is affected.

If we need to recover a 01 dibit, which is +1800 Hz deviation, and if the deviation level is +1600 Hz, we have an error of 11.1% from the ideal deviation. While P25 radio designs typically can handle up to 10% error, we want to make sure that the symbol deviation is as close as possible, because once the modulation is transmitted, noise and channel conditions will degrade the signal further. 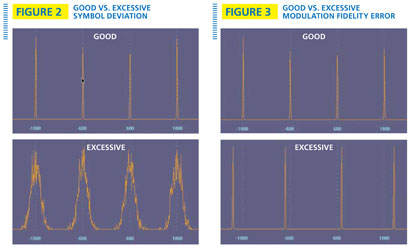 Receiver sensitivity is measured differently in P25 systems than it is in FM systems. While FM usually requires a test of sensitivity using SINAD or distortion, a P25 system, because it is digital, must use a bit error rate, or BER, test. Such tests are done using a defined test pattern as specified in the TIA/EIA-102 CAAA.C standard, usually using the 1011 tone or the 511 (V.52) tone. These tones are locked-down bit patterns, since any variation would cause bit errors. A digital signal generator, or a digital radio test set that can generate these tones, is utilized for this test, during which the RF level is reduced to find the corresponding value for 5% BER. Typically that would be around –116 dBm.

Typically, a P25 conventional system uses a push-to-talk type of operation, where the radio simply is keyed up and communication continues. However, conventional P25 systems allow access by utilizing a digital code called the network access code, or NAC. If the repeater sees an NAC that is different from its programmed NAC, it will not allow the radio on the network. Also, if the channel is busy, the P25 CAI uses status symbols to indicate whether that channel is available.

Obviously, if the radio is programmed with an incorrect NAC, the radio will not be allowed access to the network. Any test system should allow the engineer to quickly identify the NAC code and the ability to test operation with different status symbols.

Trunked systems automatically detect open channels and then dynamically assign channel requests to those available channels. This means that trunked systems can handle a significantly higher level of users compared with conventional systems. Trunked systems require the use of a control channel that all mobiles and portables monitor to discover what channel they are being assigned. These systems are more complex than conventional systems and require much more signaling and messages being sent across the air to the mobiles and portables.

In addition, the mobiles and portables must have added monitoring and signaling to be able to communicate with the network. Test equipment designed to be used in trunked environments must be able to emulate both the control channel and traffic channel to ensure that the radio is set up correctly. This feature is critical when a particular test center must support multiple P25 trunked networks, because verification of the radio‘s operation can be performed on the bench, versus having to test on a live network.

Trunked systems use a control channel, so the radio is required to register with the network and then affiliate its group association. In addition, since many trunked systems have multiple repeater sites, system access requires the use of a wide area communications network identification, or WACN ID, and the use of a system identification, or SYS ID.

Upon power up or entering a trunked system, the mobile or portable begins to monitor the control channel that is putting out its WACN ID and SYS ID credentials. If the radio is authorized to access the network, it goes through a process of registering its individual identity with the network and affiliating its group association. If either the unit ID or group ID is not allowed on the network, the network will deny access to the radio.

Once the radio successfully accesses the network, the radio will monitor the control channel and then look for specific messages that alert the radio that a call is incoming. This is accomplished using a group or unit voice channel grant message from the repeater that tells the radio what channel to access for the call.

Ideally, test systems used to test trunked systems must allow the configuration of the control channel — including WACN ID and SYS ID parameters — must be able to allow or disallow registration or affiliation, and must be able to assign traffic channels to the radio.

Rob Barden is director of product marketing for Aeroflex’s radio test set line. He is a 27-year veteran of the test and measurement industry and graduated from DeVry Institute in 1983.