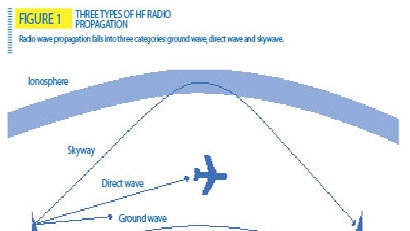 Before the first communications satellites were launched in the 1960s, high-frequency (HF) radio was the principal means to communicate beyond the horizon. Satellite links proved to be more reliable and over time HF was relegated to backup and disaster-recovery roles, with the military as the primary user. However, we are seeing a resurgence in HF radio, in part because new automatic link establishment (ALE) protocols now make HF a reliable, low-cost alternative to satellite.

Physics of HF radio propagation. Generally speaking, radio wave propagation falls into three categories: ground wave, direct wave and skywave. (See Figure 1.) Land-mobile radio deals almost exclusively with frequencies above 150 MHz, where direct wave is the only legitimate mode of propagation. HF is different. Strictly speaking, HF radio covers the band from 3 to 30 MHz. At these frequencies, vertically polarized waves travel great distances over land and even greater distances over sea water. But the real advantage of HF is skywave propagation, where a single link can span distances as great as 3,000 km (a little less than 1,900 miles). 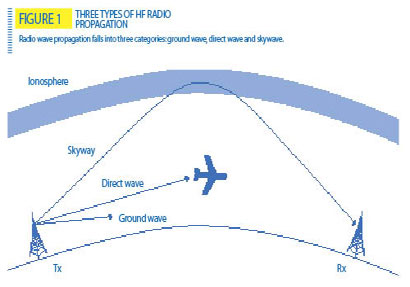 Skywave propagation occurs when the radio wave is refracted (bent) in the uppermost layer of the atmosphere, called the ionosphere. At altitudes between 50 and 400 km (roughly 31 to 249 miles), ultraviolet light from the sun ionizes air molecules, creating a layer of free electrons that sharply bends incident radio waves between 3 and 30 MHz back to the earth’s surface. The HF band is key for skywave propagation because lower frequencies tend to be absorbed by the ionosphere and higher frequencies tend to punch through the ionosphere to outer space. The skywave phenomenon was discovered in the 1920s and has been used by amateur radio operators ever since.

The ionosphere has four layers:

The D layer occupies the region from of 50 to 90 km (about 31 to 56 miles) above the earth and exists only during daylight hours. The D layer completely absorbs medium frequencies (e.g., the AM broadcast band) and weakens high frequencies through partial absorption. The D layer is the reason one only can receive distant AM radio stations at night and why most AM broadcast stations have different daytime and nighttime power levels (to minimize co-channel interference).

The E layer exists at a height of roughly 110 km and is responsible for most daytime HF skywave propagation at distances less than 1,500 km.

Between 175 and 250 km (approximately 109 to 155 miles) we find the F1 layer, which exists only during the day. It occasionally is used for daytime skywave propagation, but transmissions that penetrate the E layer often penetrate the F1 layer too (with additional absorption).

The F2 layer, at 250 to 400 km (roughly 155 to 249 miles), is the main ionospheric layer for long-distance HF radio communications. It exists day and night, but there are significant altitude and electron density variations by day, season and sunspot cycle.

Skywave propagation is a refraction phenomenon, but if we only are interested in the end result, we can model it as a reflection from an imaginary reflecting layer that is somewhat higher than the actual physical layer. This reflection model makes the geometry easier.

Depending on the electron density at each layer, there is a critical highest frequency, fc, at which the layer reflects a vertically incident wave. Frequencies higher than fc pass through the layer at vertical incidence. At oblique incidence, which is of more interest for communications, the maximum usable frequency (MUF) is given by Equation 1.

Absorption is least at frequencies near the MUF, so frequencies just below the MUF are most desirable. Frequency planning is a complicated process that involves different optimal frequencies depending on the path length, time of day, season and sunspot cycle. The challenge is complicated by the fact that the optimal frequency changes rapidly at day/night transitions, and for long east-west links, the two ends see sunset and sunrise hours apart. It often is the case that the optimal frequency simply is not available because it is being used by someone else. HF almost always operates with suboptimal parameters.

Link planning. The typical link budget for land mobile radio involves summing all the system gains and losses, including the equivalent isotropic radiated power (EIRP), receiver sensitivity, free space loss, terrain diffraction loss, and clutter loss. With HF skywave propagation, diffraction and clutter losses usually are negligible, but ionospheric absorption now must be considered and background noise is a significant impairment. At VHF and above, receiver sensitivity generally is driven by thermal noise in the receiver (manmade noise at some sites notwithstanding). In contrast, at HF there is significant galactic noise and atmospheric noise (mostly from lightning) that dwarfs thermal noise in the receiver. These noise sources are difficult to predict precisely, but graphs published by the International Telecommunications Union (ITU) are very helpful for link planning.

HF skywave links often are point-to-point, but they can be omnidirectional if such an antenna is used. Because the geometry is that of a single reflection, there always will be a “doughnut hole” of no coverage called the skip region, where radio waves are not returned back to the earth. If it is desirable to use HF for short links, lower frequencies must be used. In particular, amateur radio operators sometimes operate at near vertical incidence skywave (NVIS) with antennas that focus their main lobe almost straight up. NVIS is useful in mountainous regions where VHF and UHF signals are blocked by terrain. NVIS frequencies are too low for longer links and the combination of antenna pattern and low frequency limits NVIS links to relatively short distances (up to 150 km, or 91 miles).

Antenna types. In radio, efficient antennas are those whose length is a significant fraction of a wavelength, and HF is no exception. To appreciate the scale of the problem, consider that at 3 MHz, a half-wave dipole is 50 meters long (164 feet). Typically, base station antennas are large and relatively efficient, while user antennas are small and inefficient. In land mobile radio, base station antennas generally operate independent of the ground, but at HF, the ground is a critical part of the antenna design. The height of the antenna and its angle relative to the ground determine the launch angle of the radio wave. Some of the most common base station antennas are described below.Whip antenna (vertical monopole). Vertical monopoles approximate 50 ohms at a quarter wavelength and operation over multiple frequencies requires an antenna tuner.

Inverted vee. An inverted vee is a dipole supported at its center with each end anchored to the ground (through insulators). The pattern is very similar to the horizontal dipole but with a stronger vertically polarized component.

Horizontal yagi. Yagi antennas are familiar to the land-mobile radio community. HF yagis operate under the same principles, but are much larger and are sensitive to height above ground. Yagis are appropriate for point-to-point links and often are mounted on rotating masts.

Automatic link establishment (ALE). Automatic link establishment is a relatively new technique to automate the once tedious and error-prone process of establishing an HF skywave link. ALE enables a radio station to close a link between itself and another station, or a network of stations. ALE provides an automatic, reliable and rapid method of calling and connecting during changing HF ionospheric propagation conditions, reception interference and shared-spectrum use of congested HF channels. ALE is standardized in Mil-Std 188-141B.

In summary, when you need long-distance radio communications quickly and at low cost, HF radio should be near the top of the list.

Jay Jacobsmeyer is president of Pericle Communications Co., a consulting engineering firm located in Colorado Springs, Colo. He holds bachelor’s and master’s degrees in electrical engineering from Virginia Tech and Cornell University, respectively, and has more than 25 years of experience as a radio frequency engineer.