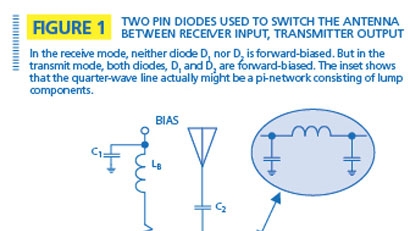 A look at the PIN diode antenna switch

Whatever happened to the old electromechanical antenna relay? In most modern transceivers it has been replaced by the solid-state antenna changeover switch. However, as a ham-radio hobbyist, I still use an old electromechanical relay for the antenna changeover switch. This removes the antenna connection from my receiver and connects the antenna to my transmitter. In other words, the receiver and transmitter are separate units instead of combined to create a transceiver. There is a very audible click from the relay when the transmit switch is turned on or push-to-talk is pressed.

Electromechanical relays are fairly reliable but, due to their mechanical nature, they do have problems from time to time. Contacts become dirty and/or pitted from use and require cleaning. Of course, anything with moving parts wears with repetitive use. The special contact surface on relays eventually will wear down, causing an increase in the contact resistance. This causes higher insertion loss and will generate heat in the presence of high current. This heat will exacerbate the problem further and eventually the contacts are so worn that they present a high insertion loss to the signal.

Enter the PIN diode, which is a specially constructed type of diode designed for use as an electronic RF switch. In a typical diode, the P-N (positive-negative) junction consists of the P-material on one side and the N-material on the other. In the PIN diode construction, however, the P-material and N-material are separated by an intrinsic semiconductor material — hence the name positive-intrinsic-negative, or PIN, diode. This intrinsic semiconductor material reduces the capacitance at the junction, allowing the diode to be used at higher frequencies. The PIN diode behaves with low resistance when forward bias is applied and with high resistance when reverse bias is applied. A high forward bias can reduce the resistance of the PIN diode to less than 1 ohm. Similarly, a high reverse bias can increase the resistance to more than 10,000 ohms.

This article isn’t so much about how the PIN diode is constructed as it is about how this component is used in practical transceivers. Figure 1 shows a simple arrangement where two PIN diodes are used to switch the antenna between the receiver input and the transmitter output. In the receive mode, neither diode D1 nor D2 is forward biased. But in the transmit mode, both diodes, D1 and D2 are forward-biased. When D1 is forward-biased, the resistance of the diode is just a few tenths of an ohm, which allows the RF from the transmitter to pass with little insertion loss. With D2 forward-biased, the input to the receiver is virtually short-circuited. With this short circuit on the receiver side of the quarter-wave line, the antenna side of the quarter-wave line is characterized by high impedance (ideally, an open circuit). Hence, RF from the transmitter is routed to the antenna, but is blocked from the receiver. 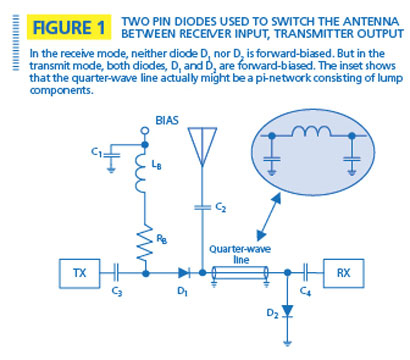 The inset in Figure 1 shows that the quarter-wave line actually might be a pi-network consisting of lump components. Often, the inductor is an etched inductor rather than a lump component. At higher frequencies, the entire transmission line might be an etched microstrip line. In the case of the quarter-wave line, the second harmonic would experience a low impedance to ground (ideally, a short circuit) and would be attenuated greatly, as would all even harmonics of the transmit frequency. In the case of the pi-network, it serves as a low pass filter, attenuating harmonics of the transmit frequency.

One of the disadvantages of the circuit in Figure 1 is that the quarter-wave line is a frequency-sensitive element. This means that the circuit operates properly over a relatively narrow frequency range. 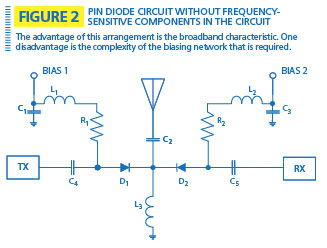 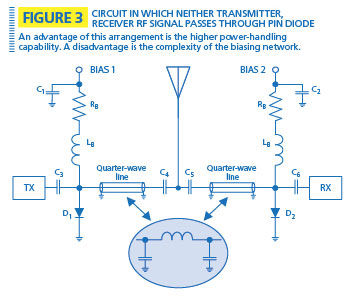 Because the power is 30 W and the impedance is 50 ohms, the RF current through PIN diode D1 is 0.775 amperes, or 775 milliamperes. This is for a perfectly matched antenna system. But, this doesn’t hold true if the antenna system is mismatched. Suppose the SWR is 3:1. This means that the percentage of reflected power is 25%. (See Equation 2.) Because the forward power was 30 W, 25% of this, or 7.5 watts, is reflected. The RF current in the reflected power would be amperes, or 387 milliamperes.

Assuming a worst-case scenario, where the forward and reverse currents add in phase, this means that the current through diode D1 is equal to 1162 mA, or 1.162 A (775 mA plus 387 mA). For the sake of simplifying the math let’s assume that the resistance of D1 (when forward biased) is 1 ohm. Under a perfectly matched-load condition, the power dissipation in D1 is watts. With a mismatched antenna with a SWR of 3:1, the power dissipation in D1 is watts — more than twice the dissipation under matched-load conditions. If a worst-case antenna mismatch exists, the reflected power would equal the forward power and (assuming the forward and reflected currents combine in phase) the current through D1 would double — and a doubling of current would mean a quadrupling of power dissipation in the diode. Thus, the power dissipation requirement of D1 would increase from 0.6 W under matched-load conditions to 2.4 W when the SWR is infinite. (This discussion assumes that the transmitter output power remains at 30 W under all mismatched conditions.)

Factors to be considered in the design of a PIN diode antenna switch are insertion loss, isolation between transmitter output and receiver input, distortion, bandwidth and power levels. High quality PIN diodes, when properly forward biased, can produce a very low resistance and, hence, low insertion loss. PIN diode antenna switches are capable of handling large power levels with minimum distortion, good isolation and low insertion loss. PIN diodes are used in many other applications, such as RF attenuators, AGC circuits and switching antenna elements to change the radiation pattern, and many other RF switching applications.