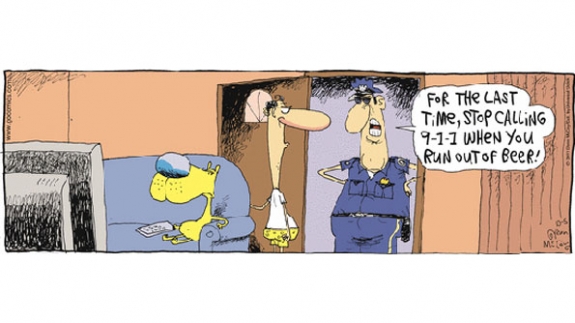 You can’t fix stupid — but you can punish it

Efforts have been made to educate the American public regarding the proper usage of the 911 system. While most have mastered the nuances of three-digit dialing, many still seem unclear on when to actually do so.

One of my favorite comic strips is “The Duplex,” by Glenn McCoy, which chronicles the adventures of a goofball and his dog. Cartoonists often mine life’s absurdities for their humor, and today’s strip certainly provided McCoy with fodder. However, I didn’t find it funny at all.

There is a problem in our country that has existed for quite some time and will continue unabated until state legislatures — perhaps even Congress — do something about it. The problem concerns people who call 911 in situations that aren’t truly emergencies.

We hear these stories all the time. A few months ago, I wrote about a cable-television show that’s in development called “The World’s Most Ridiculous 911 Calls.” I spoke to the producers at the National Emergency Number Association (NENA) conference in June, and it doesn’t seem as if they are scratching for material.

Just this week, I stumbled upon a news video (see below) about a guy who called 911 because a Taco Bell wouldn’t serve him. He had walked up to the drive-through window, because he was too drunk to drive his car, something that he freely admitted to the 911 call-taker, according to the report. He was hauled off to jail for misuse of the 911 system.

I shared this anecdote with UC Senior Writer Donny Jackson who then told me of someone he knows whose daughter called 911 because one of her siblings was picking on her. Good grief.

So what should be done about this? Efforts have been made to educate the American public regarding the proper usage of the 911 system. While most have mastered the nuances of three-digit dialing, many still seem unclear on when to actually do so. Perhaps it’s because, as the comedian Ron White once pointed out in a very funny bit, “you can’t fix stupid.”

I dropped a note this week to Brian Fontes, NENA’s CEO, asking whether any other states have laws on the books that punish those who make non-emergency 911 calls. There doesn’t seem to be very many. Several states — including Alabama, Hawaii, Indiana, Wisconsin, New Jersey and Alaska — punish those who use the 911 system to report a false alarm. First offenders typically are charged with misdemeanors, while repeat offenders are charged with felonies. The former usually is punishable by a fine, while the latter additionally can bring some jail time.

There may well be other states with such laws, and anyone who perpetrates a false alarm should be prosecuted under the full extent of the law. But this isn’t what I’m talking about. Rather, I’m talking about the people who call 911 because they didn’t get their fries with their fast-food order. They need to be stopped. A handful of states are trying. Pennsylvania, for instance, considers it a misdemeanor to “maliciously” call 911, though I’m not certain what constitutes maliciousness. Similarly, in California and Tennessee, it is a misdemeanor to call 911 for any purpose other than an emergency.

Every state should have laws like those in California and Tennessee. Now, I am certain that some readers will be quick to point out that the perception of what constitutes an emergency will vary greatly from person to person, so such laws would be difficult to enforce. Case in point: one of the producers of the aforementioned TV show told me the story of a man who was sitting in the bathroom stall at a very large discount store and called 911 because the stall was out of toilet paper. When he was told by the call-taker that his situation wasn’t an emergency, he replied, “From where I’m sitting, it is,” according to the producer.

To that I say, hogwash. Any jurist with an ounce of intelligence should be able to discern between an emergency situation and one that is not. As Supreme Court Justice Potter Stewart wrote in the 1964 obscenity case Jacobellis v. Ohio, while hardcore pornography might be difficult to define, “I know it when I see it.” I think it would work similarly in cases involving people who call 911 for non-emergencies.

But in the interest of helping out, I’d like to point to the state of Oregon, which considers a 911 call “for a purpose other than to report a situation that the person reasonably believes requires prompt service to preserve human life or property” to be a misdemeanor. Not a lot of ambiguity there. It seems clear that, in Oregon, if you call 911 because you didn’t get your tacos, you’re going to the hoosegow.

Meanwhile, the state of Louisiana has no such law on its books, but some of its parishes (counties) do. In one such parish, it is unlawful to call 911 unless there is a “legitimate and justified purpose for the presence of police, fire or emergency medical personnel.” That seems pretty clear. In Louisiana, it seems, calling 911 because your bathroom stall is out of toilet paper doesn’t pass the stink test.

Editor’s Note: Our newsletters were delayed due to technical problems with our e-mail services. We apologize for the delay.