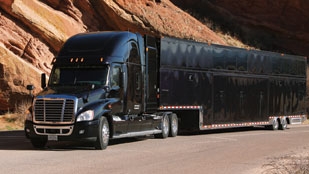 At the heart of THOR Shield is a 2-story, 80-foot-long mobile PSAP that is equipped with a 70-kW generator and the “latest and greatest” in communications equipment that allows it to interoperate with all forms of existing wireless and wireline systems, according to Brian Davenport, Intrado vice president and THOR Shield program director. The current configuration allows 17 call-taker or dispatch positions to be supported inside the trailer, and even more can be supported outside the vehicle under an awning or other cover, he said.

“It’s a matter of physical space available to us,” Davenport said. “We can add many, many times the number of positions we have inside.”

Intrado plans to house THOR Shield trailers at a dozen or more sites throughout the country, so they can travel to a customer site within 4-12 hours, Davenport said. Thanks to an extensive pre-planning process, the THOR Shield trailer will be configured to the local PSAP’s specification upon arrival, he said. 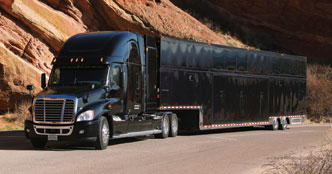 Many PSAPs have investigated having a backup location for its personnel in the event that the primary call center is unavailable for some reason, such as being hit by a hurricane or flooding. However, building and maintaining an alternative site is expensive, and it’s possible that the secondary location could be victimized in the same manner as the primary PSAP in cases such as natural disasters.

With this in mind, Intrado created the THOR Shield program, which lets multiple public-safety agencies share the cost of the mobile 911 infrastructure and use it when it is needed, Davenport said.

“We’ve structured the program so that a particular agency doesn’t have to carry the full burden of one of these trucks,” he said. “We offer this in a fractional ownership model, if they choose to, so they can share that cost with many other owners. Intrado takes on the burden of making sure that the infrastructure works, is configured exactly as that agency needs it to be, and is ready to go whenever they need it.

“It’s given us the ability to provide an agency of literally any size a backup center with the latest and greatest versions of their equipment.”

Davenport stressed that THOR Shield is a service, not just a large communications vehicle. In addition to providing a mobile 911 center, the program can include myriad support services —including trained call-takers and dispatchers, if needed, he said.

“Most agencies would probably tell you that they would prefer to have their own call-takers in that vehicle, if that’s possible,” Davenport said. “But there are situations where that may not be possible. Intrado has a staff of trained 911 professionals that are capable of taking 911 calls.”

THOR Shield was deployed this summer in Union County, N.C., where it housed PSAP operations while the primary call center was undergoing asbestos abatement, Davenport said. 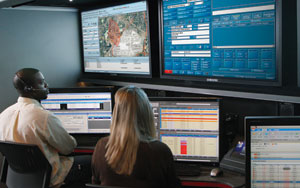 “They didn’t have a place to go, so we brought THOR in and connected it to their facility,” he said. “For several weeks, their call-handling people and dispatchers used THOR to run their operations successfully.”

THOR Shield represents Intrado’s initial entrance into the mobile 911 call-center marketplace, and Davenport said the company is optimistic about the value proposition for customers.

“Given our experience in providing both services and product to the public-safety industry for so many years, we feel uniquely qualified to be able to do this in a way that nobody else can,” he said.