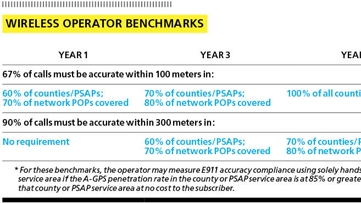 Cutting through the clutter

One of the leading challenges for first responders today is how to accurately locate an emergency caller indoors. This challenge only will grow as subscribers increasingly come to rely upon their mobile devices for the vast majority of calls, both indoors and outdoors.

A plethora of statistics illustrates the fact that America is becoming a society that depends on mobile devices to operate in all environments. For example:

The logical outcome of all this indoor calling from mobile devices is that the percentage of 911 calls placed from such devices indoors is increasing. Indeed, the FCC estimates that 70% of all 911 calls are made from a mobile device — thus a significant amount of those calls are assumed to originate from indoors.

Another development driving the issue of in-building coverage as it relates to public safety is the FCC’s Enhanced 911, Phase II rules that mandate location accuracy. These rules, adopted in September 2010, require that location accuracy be measured at the county level, with provisions for some special exclusions. The rules also establish specific time line benchmarks which wireless operators must meet over the next eight years.

While this regulatory development does not explicitly call for indoor-location rules, the tighter accuracy requirement applies to all 911 calls, including those originating indoors. Because of this, wireless operators must seek a location technology that is able to satisfy the accuracy requirements both indoors and outdoors.

In addition to the new E911 accuracy rules, the FCC also announced a comprehensive plan to upgrade the technology behind the country’s emergency call systems and move toward next-generation 911 (NG-911). Two of the primary goals behind the plan are to enable the use of advanced communications methods beyond voice — such as text, photos and video — to contact PSAPs, and to develop location accuracy mechanisms for NG-911.

This move reportedly was motivated by the 2007 Virginia Tech mass shootings, when students hiding from the gunman inside classrooms were unable silently to text 911 call-takers, which would have enabled them to avoid giving away their whereabouts by talking on their phones. At the same time, pinpointing the students’ location inside campus buildings would have posed challenges for satellite-based location methods, such as GPS, which require line of sight to orbiting satellites. Consequently, the NG-911 action plan also reflects the expanding reliance on mobile devices for calls originating indoors.

The drivers are clear but the solutions for locating such callers vary. GPS-based location solutions have several limitations. The first is that they require GPS receiver chipsets to be installed in the caller’s mobile device. Although the number of GPS-enabled devices is increasing due to widespread adoption of smartphones, the technology is not ubiquitous from a global perspective. Even when a phone is GPS-capable, many users shut off the GPS feature to avoid battery drain.

Also, GPS solutions often can take longer to locate a target — resulting in possible life-threatening situations for emergency callers — because while they work well in direct line-of-sight (open sky) conditions, such as those found in suburban and rural areas, they are challenged in urban areas, particularly in dense urban canyons. This is especially true in indoor environments from where most calls are originating.

An alternative is a standards-based location method called RF pattern-matching (RFPM). This network-centric positioning method is based on radio link measurements collected from the network and/or the device, and relies on predictions or models of the radio environment. An RFPM-based solution performs an algorithmic comparison of the measurements to estimate the device’s location. In short, it uses the device’s own radio signals to identify its location, eliminating any dependency on satellites or other network hardware.

RFPM is able to locate all calls across any air interface and in any environment, eliminating limitations related to the type of phone or network technology. RFPM works extremely well in non line-of-sight conditions such as dense urban and indoor environments, and is highly reliable for mission-critical public-safety applications.

In addition, RFPM is able to utilize all radio signals, including Wi-Fi, to produce location information. This raises the question of whether Wi-Fi alone can be used to identify emergency callers indoors. Certainly, Wi-Fi is pervasive throughout the U.S. — which leads the world with more than 72,000 access points, more than double the number of the next closest country, China.

However, relying on Wi-Fi alone for a mission-critical application such as 911 is not workable for many reasons.

In addition, war-driving to measure the access point database commonly misses many indoor access points, making it an unsuitable location method for public safety. These indoor dead zones result in poor yield — only 60% of indoor calls are located using current outdoor Wi-Fi access point calibration — meaning that 40% of indoor Wi-Fi calls fail to be located at all.

Distributed antenna systems guarantee line-of-sight conditions; increase coverage and capacity with a minimum number of added base stations; and increase the battery life of the devices. These capabilities have prompted additional uses of DAS even in outdoor scenarios (e.g., city of Palo Alto, Calif.) because they are considered a fast and cost-effective wireless solution for existing and next-generation wireless systems. Moreover, DAS is a natural deployment alternative where cellular towers are not viable solutions.

However, though DAS environments solve the wireless coverage issues in indoor environments, they work best in conjunction with a location technology such as RFPM in public-safety scenarios where accuracy is paramount and traditional cell and timing-based location techniques don’t work well.

As indoor location increases in importance, so does the need to be able to locate devices on the vertical axis. Vertical-axis location — i.e., the Z axis — is growing in importance for both public safety and commercial location-based services. The FCC, in a 2010 order, stated that vertical-axis location information “could greatly enhance accuracy, and have particular benefit in buildings in terms of identifying the floor where the 911 caller is located.” Because mobile users on the vertical axis are, by definition, indoors (in skyscrapers or other high-rise buildings), the aforementioned issues concerning indoor location similarly apply.

Regardless of the lifestyle and regulatory drivers, there is one predominant reason for choosing a technology that enables indoor location — to help first responders get to an emergency caller more quickly. Every second counts, and the less time it takes to locate a 911 caller with high precision, especially indoors, the more likely it is that a life will be saved.

Scot Gordon is director of advanced technology for Polaris Wireless.