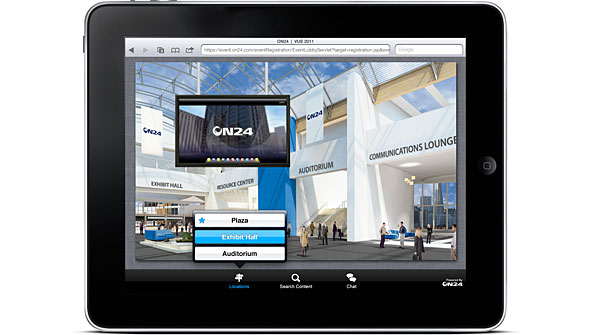 Webcasting and virtual-event solutions vendor On24 recently added a mobility component to its offering that optimizes such events for viewing on mobile phones and iPads.

Webcasting and virtual-event solutions vendor On24 recently added a mobility component dubbed MOVE (mobile virtual environments) to its offering that optimizes such events for viewing on mobile phones and iPads. While such content is delivered in list format to mobile phones, tablets receive a three-dimensional graphical experience that replicates the experience users would receive if they were viewing the event on their desktop computers. (See screenshots.)

There is nothing that end users have to do to view the content on their mobile devices, according to Tom Masotto, the company’s vice president for product management. 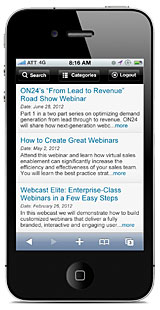 “They don’t have to anything special,” Masotto said. “They don’t have to design their virtual environment with mobile in mind. The On24 technology says, ‘You’re coming in from a phone, let me show you this,’ or ‘You’re coming in from a tablet, let me show it to you this way.'”
Users access the content using their device’s Web browser, rather than via an application, Masotto said.

“We got some feedback from our clients, and they directed us to just use the browser,” he said. “They told us that they already have apps everywhere, and they were worried about having to distribute and manage yet another one. They felt it would just be another layer of complexity to worry about.”

The company opted for HTML5 instead of Flash for its content-delivery platform, because the latter doesn’t work on all mobile devices, Masotto said.

The enterprise is the primary target market for MOVE — particularly for sales training, because sales personnel are rapidly migrating to tablet computers from laptops — but Masotto believes the platform also would be advantageous to public-safety agencies, which struggle to get police officers, firefighters and emergency medical technicians into the classroom for training.

“We are starting to see a lot of opportunity with clients that have field-based personnel, or people who are working outside of the central office, who need training,” he said. “Training is a big driver, in part because people need it to be certified.”