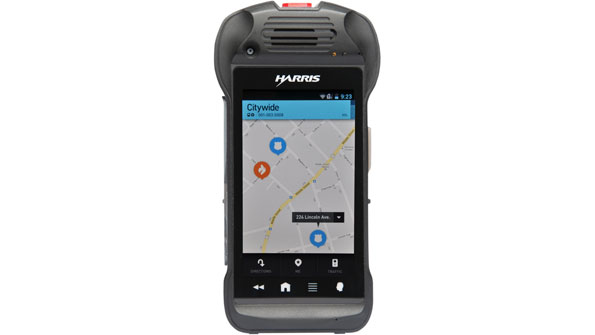 Harris today announced the launch of the InTouch RPC-200, a ruggedized LTE smartphone that will be able to operate on commercial carrier networks and Band 14 public-safety LTE systems.

Harris today announced the launch of the InTouch RPC-200, a ruggedized LTE smartphone that will be able to operate on commercial carrier networks and Band 14 public-safety LTE systems.

Unveiled and demonstrated at the International Association of Chiefs of Police (IACP) show in San Diego, the InTouch includes typical smartphone features such as the Android 4.1 operating system and a commercial LTE chipset. But the device also includes public-safety characteristics, such as a large push-to-talk button, waterproof speakers and noise-cancellation technology.

"It feels in your hand like a ruggedized tool, not necessarily a commercial device," Paul May, senior product manager for Harris, said during an interview with Urgent Communications. "But it is still relatively light and relatively small — it's very easy to stick in your pocket and carry around during the day.

"It has the types of features that users would associate with smart phones, in terms of being able to browse and being able to connect to Wi-Fi and Bluetooth. But they would also recognize immediately the LMR heritage of the device, with the larger push-to-talk, the larger speaker and its general ruggedness."

Because InTouch works on both public-safety Band 14 systems and commercial-carrier networks — including 2G and 3G networks, if LTE access is not available — the device should be valuable to agencies that want to leverage commercial LTE capabilities until the planned nationwide public-safety LTE network is deployed in their geographic jurisdictions, May said.

In addition, the device is designed to support the Harris BeOn technology, which enables encrypted, push-to-talk P25 voice communication via private LTE or commercial-network connectivity to an LMR network, May said.

"I would say that it is capable of delivering voice critical for a mission, but I think the users have to determine whether this is the right device for them to support them in their operation," May said. "There are certain instances where you would want to have a direct-mode, talkaround capability — for example, a firefighter running into a burning building. In that case, this is probably the wrong device for them.

"However, for a battalion chief that is outside that building and needs to be able to access databases, wants to be able to able to track users and equipment with mapping capabilities, is interested in providing video back to a command center, this might be the right device for them."

With the InTouch, Harris has announced both a smartphone and tablet device for public-safety LTE users. The company announced the BTC-100 public-safety LTE tablet during the Association of Public-Safety Communications Officials (APCO) show in August.

Harris will be securing certifications for the InTouch during the next several months and plans to make the device commercially available next summer, May said. A price point for the device has not been determined yet, but "we think it will be lower than you might typically see for high-end LMR devices — I would say somewhere over $1,000 would be the expectation," May said.