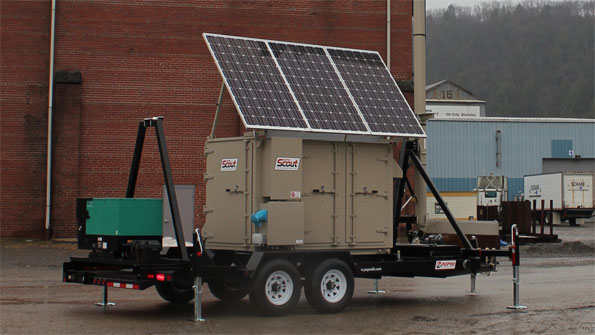 Pepro added solar power to one of its mobile tower configurations to extend its independent power, a solution that was demonstrated during IWCE.

Pepro added solar power to one of its mobile tower configurations to extend its independent power, a solution that was demonstrated during the International Wireless Communications Expo (IWCE) earlier this month.

“Our Scout trailer, which is our next-to-the-smallest trailer that we offer, will have hybrid power on it,” Pepro President Kelly Lander said. “It will have solar and battery backup power, so it’s basically a standalone site.” 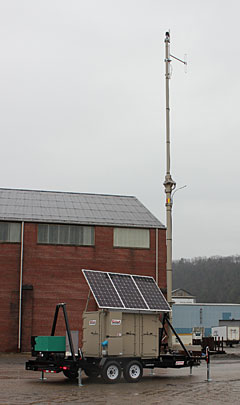 Lander said the hybrid-power solution will be deployed this summer in the state of Wyoming, where the Scout trailer tower will be used to provide temporary LMR coverage as the permanent network infrastructure is upgraded.

“What they’ll be using it for is to upgrade their sites,” she said. “It will allow them to have a site continue to be online, and they won’t have to take anything down in order to transition over to the new equipment.”

Many mobile and fixed tower solutions rely solely on diesel generators for backup power, but such generators may be drained in 3-4 days and require refueling, according to Adam Felmlee, mechanical engineer for Pepro. By incorporating solar power, the Pepro offering provides significantly enhanced run times, he said.

“There are solar panels on it, and a battery backup,” Felmlee said. “So, that generator only turns on when it has to be on to charge the batteries. What that does is give you extended run times.

“Really, with the solar panels on it, that generator should never turn on. The generator is just there as a backup to the solar energy

This ability to operate for long periods of time independent of the commercial power grid should make the Pepro solution especially attractive as a post-disaster communications method, Lander said.

“After Hurricane Sandy, a lot of the problem with communications was that sites were down, or the power was down. This could be a quick [way to] pull in, get a site up and running and not have to worry about getting back around to refuel it.”