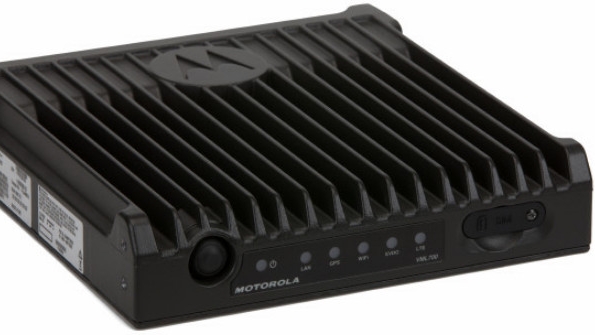 Motorola Solutions and Verizon jointly announced the development of the VML 700 LTE Vehicle Modem R1.1, which is designed to operate on Verizon’s 4G LTE network and on public/private Band 14 LTE networks.

Motorola Solutions and Verizon today jointly announced the development of the VML 700 LTE Vehicle Modem R1.1, which is designed to operate on Verizon’s 4G LTE network and on public/private Band 14 LTE networks. The nationwide broadband network for first responders being built under the aegis of the First Responder Network Authority (FirstNet) will operate on Band 14 spectrum in the 700 MHz band.

The device is the result of a partnership, announced two years ago, between the two companies to support the first-responder community by leveraging Motorola’s solutions and Verizon’s 4G network.

The modem is designed to be mounted in the trunk or cab of a vehicle—the former for police vehicles and the latter for fire/EMS vehicles. It will roam seamlessly between Verizon’s commercial network and the public-safety agency’s Band 14 network, similar to how smartphones roam between cellular and Wi-Fi networks. The modem has a jack that lets it connect to the first-responder vehicle’s mobile data terminal. Price will vary based on options and the type of antenna used; three antennas are available—one each for police, fire and EMS vehicles.

The ability to roam seamlessly to the commercial network will be helpful during major, multijurisdictional incidents, when a public-safety agency's private LTE network might become overloaded, according to Deep Grewal, senior director of business development for Motorola Solutions. In addition, a built-in “connection manager” allows agencies to set priority-based parameters.

“You can granularly, at a command-center level, define the 20 key individuals—all of whom wear different hats—that need to respond to an incident, and need to be guaranteed X, Y, Z type of functions,” Grewal said. “So, if Sheriff A needs a video pipe for one hour at 2 Megs [MB/s], you can do that.”

The modem also has the ability to serve as a Wi-Fi hotspot, which is another capability that will be quite useful, according to Grewal.

“A fire chief will roll up to an incident and will want to use his tablet or smartphone to access certain applications,” he said. “But that device might not have a subscription to Verizon’s network—it might not even have a cellular chipset. It doesn’t matter, because he’ll be able to connect to broadband via the modem that’s in the fire engine.”

Verizon anticipates that it will complete the conversion of its nationwide 3G network to 4G LTE by the end of the year. Currently, Verizon serves 500 markets that cover about 298 million people. The next step will be to expand network capacity to keep pace with America’s seemingly insatiable demand for mobile data, according to Kevin Irland, a Verizon spokesman.

“We’ll be broadening the depth of the network, as opposed to extending it more,” Irland said, adding that the effort will focus first on markets where there is particularly high demand.

Currently, Harris County, Texas, has the only Band 14 public-safety LTE network that is operational, although as many as seven other areas in the U.S. are positioned to deploy similar systems during the next couple of years, with the intention of integrating these broadband networks into the nationwide FirstNet system.

Until these public-safety LTE networks become reality, first-responder agencies will continue to rely heavily on commercial networks for their mobile-data needs. While Verizon touts that the 4G network is 10 times faster than its 3G network, the bandwidth that users actually experience could be less than that—perhaps significantly so. The data rate depends on the capacity that is available in any given area, the number of consumer/public-safety users on the network at any given time, and the applications being used, Irland said.

So, while it may be possible for first responders to stream live video from the field over Verizon’s 4G network, it is more likely that they’ll be using it to do the same things that they’re doing on the 3G network today—license-plate recognition, transmission of mug shots and documents, and field reporting—only they’ll be able to do all of that much better, according to Greg Burns, Verizon’s manager of public-safety product marketing.

Speaking of improved definition, Grewal told of a demonstration conducted last year that showed what can be seen when video is transmitted over a 4G pipe versus a 3G pipe.

“We showed a video clip to a bunch of folks in a room on 3G, and we asked them what they saw,” he said. “It was a crowded street, and what they saw was a woman and man shake hands and then go on their way—that was it. Then we cranked up the knob to 4G, so we got better pixilation and better video. When they watched the video again, they saw that the woman handed the man a gun. They also were able to see exactly what it said on his shirt and hat, and they could make out the tattoo on his arm.”

“Having that kind on intel and being able to pass it on is amazing.”