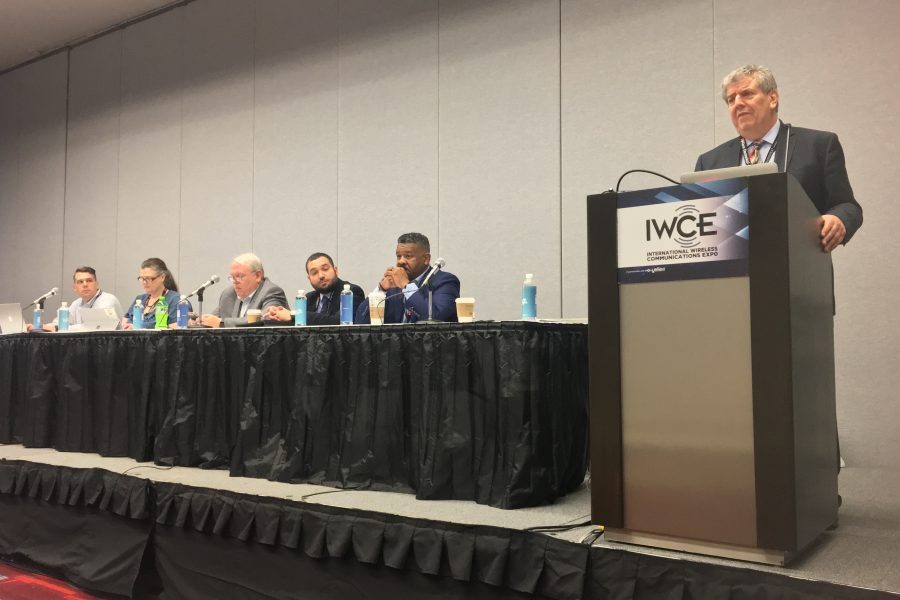 LAS VEGAS—Whether Verizon and FirstNet—the nationwide public-safety network being built by AT&T—should support secure interoperability between subscribers of both systems was the topic of a spirited debate yesterday at IWCE 2019 between consultants who work with Verizon and AT&T.

In building FirstNet, AT&T established a physically separate LTE core to manage FirstNet subscriber traffic, providing public-safety users with priority and preemption rights over commercial traffic across AT&T’s network, including all of its existing LTE spectrum bands. Verizon has said it will match FirstNet functionality, providing priority and preemption through a virtual public-safety LTE core on its broadband network.

FirstNet and Verizon users have the ability to have basic interoperability when network capacity is not an issue, but Verizon wants the FirstNet system to recognize Verizon public-safety customers’ priority and preemption when communicating with a FirstNet user, according to Robert LeGrande, CEO of The Digital Decision who consults with Verizon.

This reciprocal recognition of priority and preemption rights is different than the core-to-core interoperability that some Verizon initially sought and was depicted in a slide that was displayed as part of LeGrande’s presentation during a three-hour IWCE session about selecting a broadband carrier.

“If you’re FirstNet AT&T, and I send you a message—there still is interoperability at the carrier level … you can do that now. It’s the care of the messaging when it comes across, and [each carrier] recognizing that it’s coming from a first responder and, therefore, will get different treatment on [the other carrier’s] network. That ensures that public-safety communications have priority and preemption—no matter what network they’re on—during a time of crisis.

“That’s not an unreasonable request, nor does it require core-to-core interoperability. Nobody’s looking to get access to FirstNet’s core in that model; it’s just passing the priority-and-preemption protocols back and forth.”

Without such recognition of priority-and-preemption rights, there is a possibility that first responders subscribing to different carriers may not be able communicate with each other in times of crisis—when network congestion is heaviest and prioritized access is most needed, LeGrande said.

LeGrande proposed that the interoperability issue between FirstNet and AT&T be studied and re-evaluated. But Dick Mirgon, a consultant who works with AT&T, said that debate and study on the topic has been done several times, including before a law was passed in 2012 that called for the FirstNet Authority to oversee deployment of a broadband network for public safety.

“We, as public safety, asked Verizon—we literally begged them—to bid on this RFP [to build FirstNet], and they chose not to, and AT&T was the only major carrier that did. Verizon didn’t come to the party, and now it’s about maintaining their customer base. Putting this up for debate again? Been there, done that. You can’t keep going back and say, ‘Let’s have a do over,’ because you don’t like the result. Verizon didn’t think this thing [FirstNet] was going to take off, and now they’re doing this to maintain their customer base.”

Mirgon and LeGrande emphasized their roles as consultants, noting that their statements should not be interpreted as official positions for their carrier clients.

Both Mirgon and LeGrande have been advocates for public safety’s use of broadband technology to improve communications and situational awareness during response efforts. Both cited the fact that officials for Verizon and AT&T told Congress in 2010 that they would not grant public safety with priority and preemption over their commercial networks, which prompted lawmakers to establish the FirstNet Authority.

But that changed in March 2017, when AT&T was awarded the FirstNet contract and immediately announced that FirstNet’s public-safety subscribers would have priority and preemption across the AT&T commercial network, as well as over the 700 MHz Band 14 spectrum licensed to the FirstNet Authority. Verizon, which is the leader in public-safety market share, has made similar commitments to match the FirstNet offering, and other carriers also are focusing more attention on first responders.

Given this activity, LeGrande said that “FirstNet is successful already” in terms of sparking competition in the public-safety-communications market, which is leading to first responders having choices that are resulting in greater functionality and better pricing. Promoting interoperability will help ensure that trend continues, he said.

“The main reason we need to look at interoperability is not because of any decision we made in the past,” LeGrande said. “It’s because of what we need to do for the future. This is the right time to re-evaluate, to make sure. We don’t say, ‘Because you didn’t do this or you didn’t do that, we shouldn’t look at the future.’ This is public safety we’re talking about.”

“Public safety wins with that—don’t get me wrong,” Mirgon said. “But let’s not go back and rewrite history, because [Verizon proponents] don’t like the outcome. Let’s deal with what we’ve got and move forward.”

One oft-referenced criticism of Verizon is the fact that Verizon was not a lead bidder that sought the nationwide FirstNet contract. But LeGrande said that Verizon did participate in the FirstNet procurement, although he did not specify the carrier’s role, citing legal restrictions.

“The only thing I’m going to say is that Verizon never walked away from public-safety broadband, and that includes through the bid process,” LeGrande said. “People know that.”

Throughout the FirstNet bid process, Verizon was rumored to be a carrier partner in at least one of the three bids submitted to the FirstNet authority, but this speculation was never confirmed publicly. LeGrande noted that he was not providing any definitive statement on the matter, but Verizon should be applauded for its investments to support public-safety communications.

“Even if you dismiss it and say that they [Verizon officials] were part of the bid or not—and I didn’t say that they were or they weren’t, I want to emphasize that,” LeGrande said. “Even if you dismiss all of that, the fact that Verizon made investments from their own dollars—not federal dollars—to set up a competitive environment, don’t dismiss that. That’s exactly what was needed to ensure that we have the best possible innovation at the lowest possible prices.”