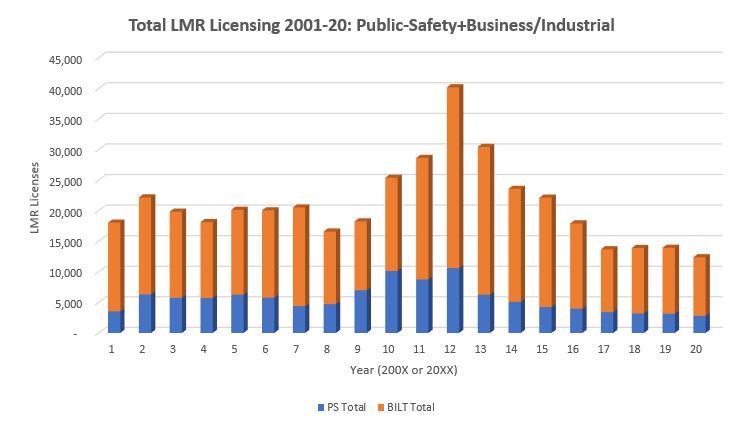 Land-mobile-radio (LMR) licensing activity in both the public-safety and business-industrial sectors dropped by more than 10% in 2020 to establish new all-time low marks, based on data available in the FCC’s online Universal Licensing System (ULS) database.

During 2020, the FCC received 12,368 LMR license application—2,791 for public-safety networks and 9,577 for business-industrial systems—with more than 700 of these applications still pending approval as of yesterday, Jan. 7. If all the pending applications were approved, the 12,368 figure would represent an 11.1% decrease compared to 2019 figures and a 9.6% drop from the previous overall all-time low of 13,678 recorded in 2017.

Based on historical data, at least 10% of overall LMR applications pending at the end of the year typically will not be approved. IWCE’s Urgent Communications plans to update all licensing figures for 2020 when a large percentage of these pending license applications have been processed.

This public-safety LMR licensing activity marks the first time that the FCC has received less than 3,000 applications  for a year in the 20-year history of the agency online ULS database. The 2020 figure represents the eighth consecutive year with a decrease in public-safety LMR licensing activity and the sixth consecutive year that a new all-time low level has been established within the sector.

From a historical perspective, the 2020 public-safety LMR licensing figure—assuming all pending applications are granted—represents a 73.7% decrease since the all-time high level of 10,602 was established in 2012, when licensing activity benefited from the FCC’s narrowbanding mandate. However, 2020 public-safety activity also will be at least 34.3% less than the 4,248 figure posted in 2015, when narrowbanding activity was largely complete and the current string of all-time-low licensing levels for the sector began.

It should be noted that virtually all of the most recent LMR licensing decreases in the public-safety sector have occurred in the license-modification category, as the number of new license applications have remained almost flat—albeit at or near the all-time-low level—for the past four years.

This 2020 LMR licensing activity represents the first time that the number of business-industrial license applications has dipped below the 10,000-application level and the first decrease after activity in 2018 and 2019 was almost flat. The 2020 figure represents a 67.6% decrease in LMR activity in the sector compared to the record-high mark of 29,569 applications in 2012 amid the FCC’s narrowbanding mandate, as well as a 46.4% decrease since 2015.

Most industry analysts believe the COVID-19 pandemic significantly affected LMR licensing numbers in the business-industrial sector, which was plagued by uncertainty and notable closures that reduced both the need for LMR communications and available funding to pay for system upgrades.

In contrast, the pandemic’s impact on public-safety licensing numbers was real—particularly in the spring, when some work was halted for logistical reasons—but not considered to be as great as it was on enterprises, given the lengthy planning and funding cycles for public-safety LMR networks, according to industry sources.

The maturation of push-to-talk-over-cellular (PoC) technology and carrier network options also is providing an alternative to LMR systems, particularly for certain enterprise sectors. At the moment, LMR technology—notably P25—continues to be the dominant push-to-talk platform for public-safety entities in the United States, although sources have cited anecdotal evidence of entities delaying long-term LMR decisions so they can evaluate PoC options like mission-critical push to talk (MCPTT) and private LTE networks.

Potential positive factors for LMR activity in 2021 include having the U.S. economy return to more normal activity and work on LMR systems that use airwaves in the T-Band (470-512 MHz). This spectrum supports the operation of some of the largest public-safety LMR systems in the U.S., as well as numerous business-industrial licensees, but T-Band activity has been extremely limited for more than eight years, because Congress had ordered the FCC to auction the spectrum.

However, the T-Band auction mandate recently was repealed, so the FCC is expected to lift the freeze on licensees in the band, which could result in a flurry of activity during 2021. Not only are many T-Band licensee expected to upgrade or expand their LMR systems, there is a possibility that some may have to narrowband their networks, although the FCC has not yet made a policy announcement on the matter.