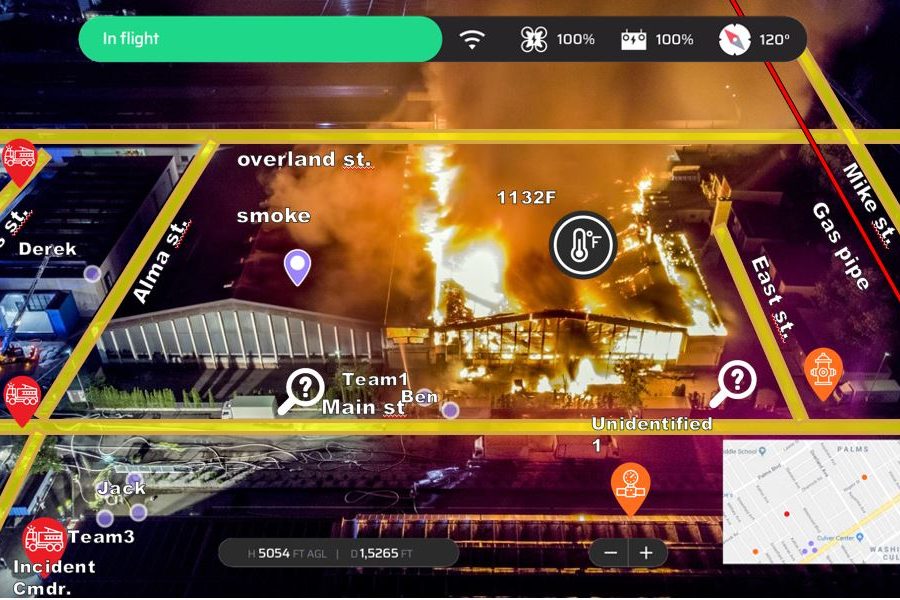 Cloud-based 911 solution provider Carbyne this week announced its integration with Edgybees, which provides software that overlays mapping enhancements on real-time video being streamed to 911 or command center in real time, so public safety and decision makers can better understand the challenges faced during an emergency.

Edgybees CEO and co-founder Adam Kaplan said that aerial video—from drones, helicopters, planes or satellite—increasingly is being used by response agencies when emergencies occur, but the raw footage is not always particular helpful, especially when disasters like flooding make the landscape unrecognizable.

“People are spending tons of money on drones, satellites, planes and things like this,” Kaplan said during an interview with IWCE’s Urgent Communications. “The end result is lots of images where people have no idea what they’re looking at.

“We’re able to overlay data on top of real-time video, to [help first responders] understand situational awareness from the air. We take the data and show you where the streets are and where people are trapped in their buildings. All of that data is being relayed in real time from the video stream to the ground control station … What happens with our software is that it’s taking all of the data and contextualizing the video, all in real time.”

Moti Elkaim, Carbyne’s head of marketing, said that the Edgybees solution brings “tremendous potential and power” to public-safety answering points (PSAPs). Perhaps just as important, the functionality is being added to the Carbyne Universe offering without requiring telecommunicators to look at yet another new screen in their work stations.

“Because our platform and solutions have open APIs, we have the ability to seamlessly integrate Edgybees into the UI [user interface] of Carbyne,” Elkaim said during an interview with IWCE’s Urgent Communications. “The call-taker now doesn’t have to navigate multiple screens at the call station to get the drone feed from Edgybees.

“We have an icon on the Universe UI [user interface], and they’re going to click on that to see the drone feeds—through Edgybees—coming in directly to their Carbyne screen. So the operations side from the call-taker’s end is extremely simple; there aren’t any specific actions they need to do, other than to click on the icon to get the feed from the drone.”

And the value of aerial video with Edgybees mapping enhancements does not have to be limited to a call center or command post, according to Elkaim.

“With Universe, we have the ability to share information live with first responders,” he said. “The drone feed and everything that can be seen on the Carbyne UI at the call-taker’s station can be shared live to the MDT [mobile data terminal] or the mobile devices of the first responders en route to the scene.

“Imagine how powerful that is. The layers that Edgybees provides is something unprecedented; we have never seen anything like it. That is why we’re so excited about the partnership—knowing that we can bring these tools to first responders and really increase the response efficiency in ways that we’ve never experienced before.”

“We use computer vision and AI [artificial intelligence] to image match—in real time—the satellite reference imagery to that video and make sure that the data is being put in the right place,” Kaplan said.

Edgybees has dozens of customers today, including the U.S. Navy and the U.S. Air Force, Kaplan said. The military customers use the Edgybees solution in a similar manner as public-safety customers—for example, agencies responding to California wildfires—but “on a larger scale and with larger aircraft,” he said.

To stream video live, the drone or other aerial vehicle needs some sort of connectivity, typically provided via LTE or other cellular technologies, Kaplan said.

Elkaim said the Edgybees integration is available immediately, although the new functionality will require some additional cost to existing Carbyne customers. For PSAPs that currently do not use either Carbyne or Edgybees, the integrated solution typically could be operational in a matter of days or several weeks, depending largely on the cooperation of the entity providing the aerial video, according to Elkaim and Kaplan.

The fact that this type of integration can be implemented so quickly exemplifies Carbyne’s goal to make new capabilities available to 911 centers in a “simple, seamless workflow that can be installed immediately in any call center around the country with zero downtime to existing operations and zero interruption,” Elkaim said.

“Our industry has been talking about next-generation 911, and what we always like to say is that we deliver on the industry’s promise,” Elkaim said.

“Carbyne keeps looking for innovative ways to increase situational awareness and response efficiency, collaborating with Edgybees and the other partnerships that we’ve announced. Once again, it amplifies our mission to really advance public safety to where it should be—really delivering all of the essential capabilities that we need to right now.”