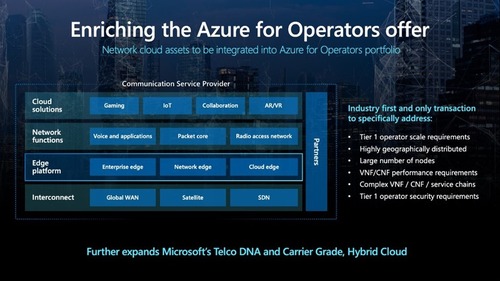 Roughly six months into their groundbreaking agreement, Microsoft reported that it is making progress in transferring AT&T’s 5G cloud and core into Microsoft’s Azure operations.

Microsoft also reported that it has received interest in the effort “from many operators, partners and customers.” That’s noteworthy considering Microsoft is using its work with AT&T to improve its new Azure for Operators offering, which the company ultimately plans to sell back to AT&T and potentially other network operator customers as well.

“We’re taking the AT&T Network Cloud technology, building it into Microsoft’s standard hybrid cloud product, and then delivering a carrier-grade hybrid cloud solution back to the market and AT&T itself, where it can run at AT&T on-premises or on Azure public cloud,” Microsoft’s Shawn Hakl, VP of 5G strategy in Azure for Operators, explained in a blog post on the company’s website. Before joining Microsoft in 2020, Hakl was a longtime Verizon executive.

However, Hakl argued that Microsoft’s work with AT&T is unique in the telecom world. For example, he said Microsoft is working to consume the Network Cloud that AT&T started building in 2013 as part of its much-touted shift toward software defined networking (SDN) and network function virtualization (NFV) technologies.