New FirstNet Chairwoman Sue Swenson details the organization's new efforts to reach out to vendors and emphasizes that "this is public safety's network" during remarks delivered during the keynote address at the PSCR stakeholder meeting. 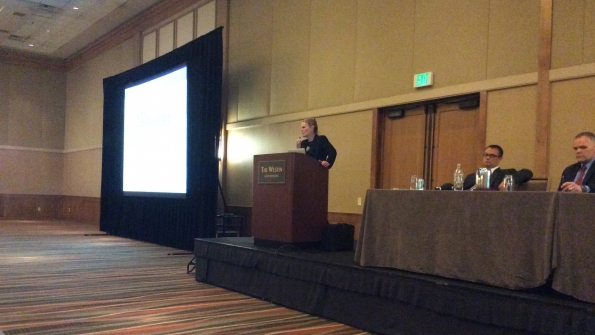 Swenson said she does not want to “dwell on what happened in the past” but acknowledged that FirstNet has some areas where it could improve its operations. In addition to relating to vendors, Swenson noted that the transition of technical-support resources from previous contractors that expired late last fall to full-time personnel and new contractors was not as smooth as it could have been.

“I would say that the transition of our contractor staff really left a gap in our resources for quite some time,” she said. “We had people working for FirstNet, and then we had a period of time of where we didn’t have any. I think we could have done a better job anticipating that so we didn’t have that happen.

“The good news is that we’ve closed that gap. We’re getting excellent people on the staff today, and I’m very excited about the people I see working on FirstNet.”

Finally, Swenson emphasized that the FirstNet board—including members with a commercial-wireless background, like herself—understands its mission and why it is trying to build a nationwide public-safety network, even though some past verbiage by some may have confused matters.

“We probably didn’t make it crystal clear … whose network it is,” Swenson said. “It’s not our [the FirstNet board’s] network; it’s public safety’s network—we happen to be building it. But I think that sometimes the choice of our words may have implied that people thought it was our network and that we provide it to you [public safety].

“It’s real important that you understand that we get it. It’s public safety’s network, and we just have the privilege of working on it.”