What is on your “wish list” for mobile data capabilities? Would it be the ability to send:

Or would you be interested in live videoconferencing between dispatchers and mobile units or the ability to conduct remote situation analysis?

For some, those are the most exciting applications for mobile data. Beyond that, wideband data can extend a public safety agency’s host computer applications to the field. It allows “roll calls” to be conducted without officers coming to the station house. It allows officers to conduct all the computer work in the field that they otherwise might have to conduct at the station. In short, it extends the time officers can spend on the street. (Pictured at the left: The 700MHz wideband link carries audio and video to and from the laptop.)

Wideband data supports email, including instant messages and attachments. It supports applications many agencies already have, including automatic vehicle location through GPS, computer-aided dispatch and access to national and state crime databases. (Pictured at the right: The Greenhouse map shows user vehicle locations.)

“Greenhouse is enabling users to do in the field what they previously could only do at their desks,” said Pam Montanari, Pinellas County’s radio systems manager.

Pinellas County is a peninsula bordered by the Gulf of Mexico on the west and Tampa Bay on the east, covering 280 square miles in Florida. The county’s population includes 921,482 permanent residents and 4,000,070 annual visitors.

The Greenhouse system is installed in selected Pinellas County Sheriff’s Office cruisers, a county EMS ambulance, the Largo Fire Department’s rescue truck, a deputy chief vehicle and a mobile unit. Users operate the system via a touch-screen, color display panel mounted in the vehicles. Each unit can communicate and share information with the other agencies. Specially equipped police and EMS dispatch positions support these units. (Pictured above: In a Pinellas County EMS ambulance, the Greenhouse display panel is mounted high on the dash in easy view.)

“Pinellas is always looking at ways to improve our efficiency. We don’t want to be the very leader, but we want to keep up for officers in the field. When we were presented with this opportunity, the county’s decision-makers gave us approval to participate because Greenhouse isn’t a product yet. We are looking at licensing these frequencies. I sit on the regional planning committee for the state,” Montanari said.

Montanari explained that, besides the improved mobile data capability, the county was considering 700MHz frequencies because “we see more and more interference in the 800MHz band. We’re chasing calls. Nextel is putting up more towers all the time, although we have a good relationship with them.”

Tropospheric ducting, a variable, natural atmospheric phenomenon that extends unwanted radio coverage by bending radio signals so they can travel well beyond the horizon, sometimes brings interference from Gulf Coast co-channel 800MHz users. Ducting is more common in coastal areas than inland. Switching to 700MHz would alleviate adjacent-channel and co-channel interference, at least until the new band begins to fill. (Pictured above, left: The Greenhouse console shows video from several field sources and a VCR.)

“Greenhouse” is the name Motorola gave to its trial to reflect that, just as new plants grow in a greenhouse, new mobile application ideas grow when a public safety agency is given the opportunity to use an expanded capability. (Pictured at the right: Field video allows a comparison of a shoe’s sole and a footprint.)

Pinellas County was selected for Greenhouse after a nationwide search. The county has a history as an early adopter of mobile data, including its sheriff department’s use of Kustom Electronics mobile data terminals as early as 1975.

The FCC established the NCC to solicit advice from the public safety community about rules for governing the 700MHz public safety band, particularly in regard to interoperability. 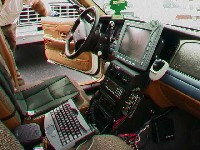 Byrum said that the sheriff’s department wants to implement the mobile data; the county transportation authority is interested in intelligent transportation systems; and the county commission wants all agencies to work together. He said that Greenhouse ties everything together. (Pictured at left: A Pinellas County Sheriff’s Office cruiser with wideband data equipment.)

“This comes at the right time for the Sheriff’s Office as we prepare to leave our third mobile data system,” Byrum said. “We’ve used it for full dispatch, car-to-car messaging and database inquiries since it arrived. We’re comfortable with it. But old technology can’t keep up with our needs. This project gives us an opportunity to meet our expectations. And we want the 700MHz wideband data standard to be set soon.”

At first, the county’s CAD system wouldn’t interface with Greenhouse, but then Byrum said that they realized the CAD system was IP-based. Loading the CAD application in the mobile computer turned it, in effect, into another call-taker position, wirelessly connected.

“All of a sudden, our officers had the entire resources of our CAD system at their fingertips,” he said.

Rich Baids, vice president of radio systems at Motorola, said that because the Pinellas County infrastructure already is advanced, “we could get Greenhouse up and operating in less than an hour. The IP architecture we’re executing on is critical for implementing and leveraging investments a customer already has. It’s critical for us to find innovative and influential users who direct how the 700MHz band will be used across the country.” Given Pinellas County’s NCC participation, he found one.

Baids added that the technology represented by Greenhouse has been proposed to the Telecommunications Industry Association as a wideband standard.

And what is the technology? Scalable adaptive modulation. The SAM air protocol is a native IP network, allowing end-to-end IP packet-based communications. Voice-over-IP has been implemented with an IMBE vocoder using H.323 protocol. Voice is full-duplex so users can both speak at the same time. Video over IP has been implemented using H.263 protocol. Quality of service capabilities are also used. Operating at 460kbps, Greenhouse is 48 times faster than the current U.S. public safety standard.

SAM works in a 50kHz, 100kHz or 150kHz channel. It can adjust its modulation (throughput) depending on a mobile unit’s distance from the radio tower. Greenhouse operates under an experimental FCC license for a 150kHz channel in the 700MHz band.

“Greenhouse grew our technology to fit customers’ ideas,” Baids said. “They’re coming up with applications we hadn’t thought of. Our eyes have been opened by Pinellas County and the creativity they’ve developed.”

The Greenhouse Project is a private digital radio system, which was first operational on Dec. 20, 2000. Product availability is contingent on FCC licensing and the completion of standards. For more information on the Greenhouse Project, visit www.motorola.com/greenhouse.

Pinellas County is hosting tours of the system. The tour dates are Sept. 5 and Oct. 4, 2001. Additional dates may be provided, as needed. For tour information, contact Tim Goodall of Motorola at 847-576-5186 or [email protected].