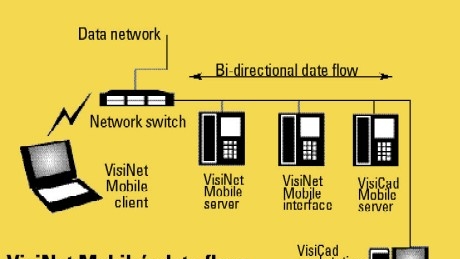 Bringing CAD into the field

Police officers, firefighters and emergency medical technicians are hungry for more and better information in the field. But while traditional mobile data systems offer messaging and some data-lookup capabilities, first responders want a broader range of functions, similar to the functions that dispatchers can access from their consoles. Specifically, they want onscreen maps, navigation help and full details about the incident to which they are responding.

“Our customers were saying, ‘You’ve got this great CAD system; why can’t you extend it into the field? We need more data. We need maps,’” said TriTech CEO Chris Malone, whose San Diego-based firm has sold CAD software for public safety since 1991.

San Diego Fire-Rescue Department (SDFD) officials hope to have VisiNet fully functioning on Panasonic Toughbooks installed in 200 vehicles by next June. In Austin, Texas, responders working for Austin-Travis County Emergency Medical Services and the Travis County Sheriff’s Department started using VisiNet Mobile in 100 vehicles this spring. City of Austin police officers and firefighters will soon join them, raising the number of mobile units on the system to about 1000. These agencies have jointly implemented VisiCAD Command in Austin’s Combined Transportation, Emergency and Communications Center (CTECC).

Vendors often incorporate geographic information system (GIS) and routing capabilities in their CAD software. But while operators sitting at dispatch consoles can take advantage of those systems, first responders on the streets don’t have direct access to the same information.

“They need to know, ‘How do I get there, where am I currently, what is the route to the call,’” Malone said, adding that when first responders arrive at an incident, they also need to see what other units are on the scene and where they’re positioned.

TriTech implements GIS software on mobile computers, making maps available to first responders without the need to transmit large graphics files over the air. Global positioning system receivers support automatic vehicle location, keeping users apprised of their own position and the positions of others in the fleet.

While field personnel need to reach no further than the mobile computer’s hard drive for map data, they can also reach across a wireless network for data from other sources. Along with details about a specific incident drawn from the CAD system, additional key information might include data from their agency’s administrative systems, state and local government databases, subscription-based databases and selected sites on the public Internet. A first responder might use the system, for example, to look up information about hazardous materials or access a state Web site for details about prison inmates, Malone said, adding that TriTech has developed its own end-to-end security scheme for the wireless system, which complies with the U.S. government’s FIPS 140-2 standard. 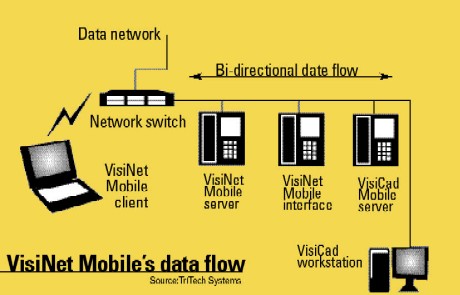 VisiNet Mobile works with a variety of wireless technologies and can switch on the fly between two different networks — for example, between a commercial system and a higher-bandwidth, privately operated 802.11 network. SDFD will use that technique once it gets its system fully running next year. The department will rely mainly on Sprint’s wireless data service, possibly supplemented in some areas by service from Verizon Wireless. At each fire station, however, it will install a Wi-Fi hot spot, and vehicles that drive within range will automatically switch onto that private network, said Susan Infantino, the department’s communications manager.

“If there have been any changes to the maps or to the functionality in the software, it will automatically get downloaded via this hot spot,” Infantino said. “We update our map database every two weeks with new streets, ramps and that kind of thing.”

Firefighters and medical personnel will gain immediate access to these changes, rather than waiting for the department to issue new versions of its printed map books. Eventually, SDFD will add a layer of aerial photographs to its GIS system, and those also will be available on the mobile computers.

“As they pull into a canyon area, they can see the lay of the land from an overhead view,” Infantino said.

This will be especially helpful during rural incidents such as brush fires because the display will combine vehicle positions with real physical features, Malone said.

“It will show the vehicles’ exact locations, regardless of whether there’s a road there,” Malone said.

Public safety agencies in Austin-Travis County are using a Motorola 800 MHz private radio network for day-to-day communications on the VisiNet system. They also have installed 802.11 hot spots at certain public-safety locations, so users can receive software and map updates over the higher-bandwidth network, said Greg Middleton, communications commander and technology manager with Austin-Travis County EMS. The EMS had been using a text-only mobile data system since 1989.

Onboard routing software with up-to-date mapping information helps get first responders to incidents faster, Middleton said. Area agencies expect response time to improve even more next year, when the CTECC will complete an interface between the CAD system and the Intelligent Traffic Management System operated by the Texas Department of Transportation.

The link will feed VisiCAD with real-time data about travel conditions on area roadways, including traffic jams, road construction and accidents. The CAD system will use this information to calculate the quickest path to an incident based not only on permanent factors such as distance and speed limits but also on current traffic flow.

“When it’s rush hour, the CAD system knows there’s a difference,” and it will push that information down to the field crews, Middleton said. “While normally they might have gone driving up the Interstate because that’s what you might think would be the fastest route, they’ll get information that says the Interstate is crawling along at five miles an hour.” An alternative route might cut the response time, “which, certainly for emergency medical services, is a dramatic impact,” he said.

In the future, the EMS might link medical monitoring devices to the mobile system, so technicians can transmit patient data from an ambulance to a hospital, Middleton said. They’re also exploring getting real-time weather radar into the field.

“We’re looking as much as we can to provide more information, to make the job easier for users in the field and provide them with tools to be more effective,” Middleton said.

In TriTech’s VisiNet Mobile system, much of the data that first responders access — aside from mapping information — resides on one or more central servers. FiRST Responder Systems and Technology takes a different approach in its RespondWare Mobile System.

“We have a client-based system,” with data and applications also stored on the mobile computers, said Jeffrey Bean, president and CEO at FiRST Responder Systems in Baton Rouge, La. The company chose this design because of the problems first responders face during emergencies that knock out the communications infrastructure, such as the massive power outage that hit the Northeastern U.S. in August 2003.

Also, “connectivity isn’t consistent all the time,” Bean said. “We wanted the information to reside on the unit in the field so that regardless of the connectivity, the user always has access to the information.” Along with street and road data for navigation purposes, the system offers modules for managing geographically linked data on land parcels, street features, fire hydrants, pipelines, hospitals and buildings with hazardous materials.

When an agency makes changes to information that it stores on a central server, the system transmits those changes to the mobile units. Also, a user who discovers a new condition in the field — for example, a street closed due to a water main break — can upload that information via mobile computer to the server. The server then synchronizes the databases in the other mobiles by transmitting an update over the air.

FiRST Responder designed the system to work with any kind of wireless network, Bean said. “We’re sending small packets of data, just to update the fields in the databases,” so the speed of the network is not important, he said.

Customers traditionally have run RespondWare Mobile on laptop computers permanently installed in their vehicles. Through a recent agreement with Xybernaut Corp. of Fairfax, Va., FiRST Responder is now also offering the system on that company’s Atigo T portable computer, which incorporates GPS along with wireless communications.