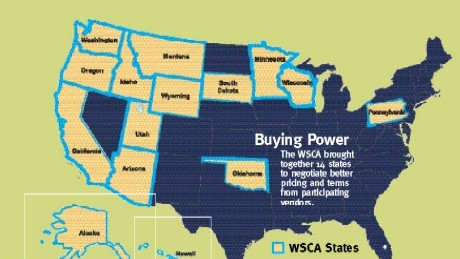 The need for interoperable communications between first responders in emergency situations currently is receiving national attention. Throughout the U.S., police departments, fire departments, emergency medical services and other public-safety organizations within the same community operate different radio systems that often do not allow them to communicate directly with one another. This can interfere with their ability to function in all types of incidents, large and small. Public officials have long sought a solution to this challenge.

Catastrophic events over the past few years have made interoperability an even more urgent goal. Today, government programs at the federal, state and local levels have identified interoperable communications as an integral element in the effort to enhance homeland security.

An example of a collective approach is the initiative the Western States Contracting Alliance (WSCA) recently undertook to evaluate and validate a broad range of public-safety communications equipment and solutions. The WSCA was formed in 1993 with its primary purpose being to establish the means by which participating states could engage in cooperative contracting to achieve cost-effective and efficient acquisition of quality products and services.

Last year, the WSCA issued a request for proposal (RFP) for public-safety communications solutions worth an estimated $500 million over a three-year period and awarded contracts to 20 vendors. Since then, 14 states have signed on to those contracts, allowing state agencies and political subdivisions in Alaska, Arizona, California, Hawaii, Idaho, Minnesota, Montana, Oregon, Oklahoma, Pennsylvania, South Dakota, Utah, Washington and Wisconsin to take advantage of favorable pricing and terms negotiated with the vendors. The contracts include interoperability solutions, along with other equipment such as gateway devices, radios, microwave antennas, towers and testing equipment. 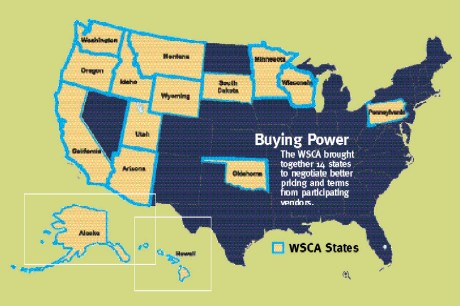 The extensive bidding process for the WSCA contract included two phases. The first phase, which began about two years ago, involved WSCA gathering experts from the government and public-safety sectors and issuing RFPs. The WSCA’s involvement enabled small local governments and smaller state agencies to leverage new technology at reasonable prices and enticed some of the public-safety vendors to look at their requirements.

The WSCA judged each proposal based on the following criteria:

In the second phase, proposed products and services were evaluated, as were relevant legal requirements. Participants were able to save time and money by allocating expert resources from the WSCA for this process. Vendors who scored well enough to move on to the second round were then visited by a technical team of senior personnel from various states, compiled by the WSCA, who conducted site visits to evaluate the products and interview key personnel before awarding the contract.

Twenty companies made it through the extensive submission and evaluation process and became eligible to participate in the implementation of public-safety communications equipment and systems for the WSCA. (Editor’s note: SmartLink was awarded a contract for its interoperability gateway.)

Even with well-vetted interoperability solutions readily at hand, agencies still face challenges in their implementation. Successfully selling to an organization such as the WSCA requires an understanding of the challenges that each of its participants face most often.

Generally, one of the most significant hurdles is the limited and fragmented planning between governmental agencies, which is exacerbated when 14 states are involved in the process. Each municipality has multiple agencies and therefore looks for a solution that will take into account its separate jurisdictions, authorizations, spectrum and equipment.

For the WSCA, it was important that the various state governments, their municipalities, school districts and other public agencies were all represented fairly, and their unique requirements were considered. Consequently, SmartLink approached the WSCA with a switch element to create a networked architecture that would answer the different needs of each state agency.

Vendors also encounter fiscal challenges, such as fragmented budget cycles and limited funding, when selling to government agencies. Therefore, it is important to be able to offer a solution that protects an agency’s investments by leveraging its existing infrastructure and allowing it to migrate to a new system and new technologies over time.

Even more important to WSCA was the cost of ownership. Cash-strapped public-safety agencies tend to shy away from solutions that require a network buildout. SmartLink’s platform answered this challenge because it leverages existing infrastructure, helping to minimize cost.