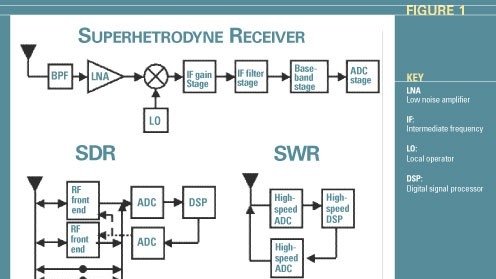 Software-defined radio, software radio and cognitive radio are futuristic concepts that promise to significantly impact wireless communications technologies. Today, however, technology ironically is one of the limiting factors in the production of a true software radio that is capable of dynamically reconfiguring itself to meet user requirements or spectral limitations.

Specifically, the lack of analog-to-digital converters and digital-to-analog converters fast enough to implement a software or cognitive radio will delay their deployment. Fortunately, fast-developing ultrawideband (UWB) technologies might provide the solution to this dilemma.

An outgrowth of military research into flexible radio architectures, the software-defined radio (SDR) concept has been around for many years and represents a change in architectural concepts for a radio receiver. Super-heterodyne receivers typically perform the majority of a radio receiver’s functions in the analog domain, using specifically designed hardware, with analog-to-digital conversion — if it happens at all — taking place in the final stages of reception. In the case of an SDR, the functions following the radio frequency (RF) down-conversion are software-based and typically performed by a dedicated high-speed processor or a digital signal processor. 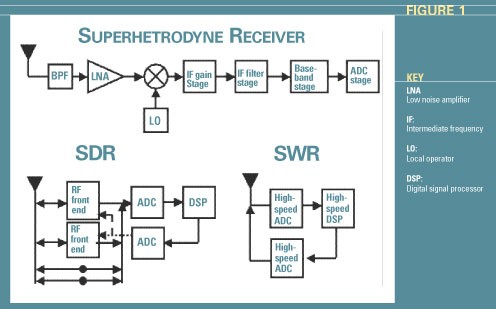 Figure 1 illustrates the differences between a conventional super-heterodyne receiver, a software-defined receiver and a software radio (SWR). The purpose of an SDR is to dynamically change both frequency of interest and modulation scheme of interest. Current SDRs change frequency of interest by switching between RF front ends and change modulation schemes by implementing different algorithms in the processor portion of the receiver. Limitations of both ADCs and digital signal processors (DSPs) force a typical SDR design, such as that used in the U.S. military’s Joint Tactical Radio System (JTRS), to implement multiple RF modules to cover the different frequency bands and technologies required.

The concept of a SWR is a step beyond that of an SDR. In an SWR, the signal is digitized at the antenna, and all of the radio functions are implemented in software that runs on a high-speed processor or DSP. Capable of utilizing different bands and different modes of operation, an SWR is adaptable and upgradeable through the modification of its software, i.e., new functions, modulation schemes or capabilities may be added by introducing the appropriate software.

For example, an SWR that is currently designed to operate on a PCS frequency band utilizing a CDMA waveform could be upgraded to utilize a wideband CDMA signal on a European frequency band, all through the addition of new software. SWR receivers represent the ultimate in a reconfigurable radio receiver architecture that is dynamically alterable and able to adapt to different technologies based upon the software loaded into them. While limitations in DAC and ADC technologies have kept SWRs from realizing their full potential, that should change as digital technologies continue to evolve and improve.

Cognitive radio (CR) represents the next step. A CR takes the adaptability and reprogrammability of an SWR and adds to it the capability to sense its environment and react in the most appropriate manner. For example, a CR operating in an unlicensed band in the U.S. might begin operations in the bands around 2 GHz using an 802.11b waveform, but upon determining that the spectrum in its current location was saturated with other users, the CR would switch to frequencies in the 5 GHz range and instead utilize an 802.11a waveform, all on its own and without user intervention.

As Joseph Mitola III stated in a dissertation delivered to Stockholm’s Royal Institute of Technology in May 2000, “Cognitive radio increases the awareness that computational entities in radios have of their locations, users, networks and the larger environment.”

A CR would dynamically support a user’s throughput requirements, be they bandwidth-, delay-, or jitter-specific, without a user’s intervention. Such radios would help to fully utilize available bandwidth by dynamically adapting to the spectrum in a real-time manner and would be able to offer a user bandwidth on demand, dynamically choosing the most appropriate air interface based upon an understanding of geoposition, spectrum rules, spectral occupancy and a host of other parameters. However, as with SWRs, a true cognitive radio cannot be realized today because of the limitations of digital technologies.

UWB technologies are a fairly new development in the wireless domain, and they present a variety of possible implementations. The FCC has decided upon two definitions for UWB technologies. The first defines a UWB signal as any signal having a fractional bandwidth (Bf) greater than 20%, where:

The second defines a UWB signal as any signal that has a total bandwidth equal to or greater than 500 MHz, regardless of fractional bandwidth.

These definitions do not consider how the UWB signal is generated or the type of modulation that is used with the UWB signal. Figure 2 shows the wide variety of signals that meet the FCC’s UWB definition. This leaves a great deal of room for a system developer to implement a UWB radio. In fact, a wide variety of UWB systems have now been proposed. These systems range from systems utilizing impulses to generate UWB spectral content to orthogonal frequency division multiplexing (OFDM) systems that utilize a large number of carriers to span more than 500 MHz worth of bandwidth. 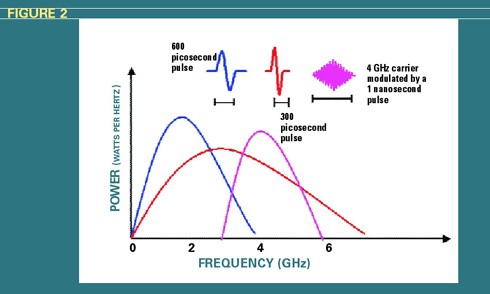 Because the technology has only recently been approved for use in the U.S., UWB system design is in the beginning stages, with several different standards having been proposed but none having been accepted to date. With UWB technologies still in a nascent stage, the potential for innovation is great; consequently, these technologies could offer unique opportunities for the implementation of SWR and CR concepts.

For instance, because impulsive UWB technologies essentially are digital in nature — without the attending complexities of RF front-end designs — a variety of such technologies potentially could be realized with the same chipset. For example, a direct-sequence UWB impulse train could be generated with a chipset that also would be capable of implementing a time-hopping UWB waveform.

It should be possible to implement a variety of impulsive waveforms, and their associated modulation techniques, entirely in software. This would essentially create an impulsive software radio. Such a radio would be capable of dynamically changing its waveform based upon need, thus reducing the UWB physical layer interface to a software abstraction. It also would be capable of implementing different impulsive physical layers based upon the specific operating environment in which the radio found itself.

While the implementation of a software UWB radio is a realizable goal today thanks to the existence of programmable pulse generators and fast ADCs, implementing a cognitive UWB radio would require some new development work centered around the creation of spectrum-sensing capabilities, spectrum-sharing protocols and dynamic waveform selection algorithms. It should be possible to modify algorithms that are currently being developed for traditional cognitive radios and utilize them in a cognitive UWB radio, thereby benefiting from the work previously accomplished in this domain.

The ultimate goal of a CR capable of dynamically reacting to the spectral environment by seamlessly implementing any waveform through the modification of its software algorithm is limited by current technology and therefore will not be available for several years. However, a cognitive UWB radio, able to rapidly react to the spectral environment and dynamically change its waveform, is one that may be realizable with only slight modifications of today’s existing technology.