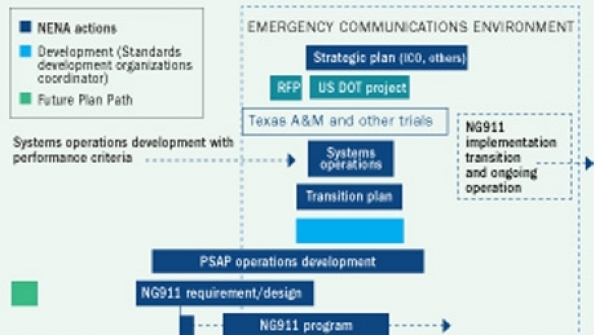 The National Emergency Number Association, or NENA, recently launched an initiative that the organization hopes will ensure a coordinated and managed approach to the deployment of next-generation IP-based 911, or NG911, systems nationwide.

The National Emergency Number Association, or NENA, recently launched an initiative that the organization hopes will ensure a coordinated and managed approach to the deployment of next-generation IP-based 911, or NG911, systems nationwide. As part of the initiative, NENA has created a Technical and Operations working group that will develop a plan to transition public-safety answering points, or PSAPs, to NG911 systems.

The transition to NG911 involves “a lot of moving parts that have to work in unison,” which prompted NENA to recognize the need for better coordination, said Patrick Halley, the organization’s director of government affairs.

NENA’s technical committee has been working for the past couple of years on ways to replace legacy infrastructure and migrate to a fully IP-based 911 system without degrading existing capabilities in any way. At the same time, the operations committee independently started looking at how the ability to accept any device, anytime from anywhere would change the 911 environment.

“We’re not going to be able to just flip a switch and everyone is [going to say], ‘Great, we have next-generation 911. It’s not going to work that way,” Halley said. “This announcement says, ‘We have to deal with this issue.’ We have to figure out how we’re going to get where we need to get, without interrupting what we have. This initiative is about identifying the transition issues.”

Another goal is to gather information and data from non-NENA NG911 efforts — such as the trial currently under way at Texas A&M University, which is funded by the National Telecommunications and Information Administration — that can be shared with other entities. “Demos and trials help us to learn from each other and avoid making the same mistakes,” Halley said.

University researchers have been working for two years on the project — which has been supported by Nortel Networks and Cisco Systems, among others — through which they hope to prove in a laboratory environment that NG911 works. To do this, they established a replica call center and IP network and then routed voice-over-IP calls to real call takers, testing everything against the I3 standards established by NENA to govern such calls.

“We’re also trying to do a gap analysis to find out the areas we can’t do and what we need to do to be able to do them,” said Walt Magnusson, director of Texas A&M’s ITEC research and testing lab.

One thing lacking was a location-based routing protocol that would send an IP-based call to the appropriate PSAP. According to Magnusson, the critical work on the routing protocol has been completed, and his team is close to establishing “proof-of-concept” for NG911. Once a proof-of-concept has been established, the university will hand the baton to the Department of Transportation — “sometime in the next few weeks or next few months” — which is set to launch an $11 million project that will strive to establish an NG911 prototype, Magnusson said.

Though not involved in the DOT project, Magnusson said NENA’s hope is that the project will spawn a prototype that creates enough momentum so that vendors start producing NG911 equipment.

“At that point, you should see true NG911 deployments happening in the next couple of years,” he said.

Given the multiple and disparate entities involved in the NG911 effort, Halley said a project-management approach to NG911 is crucial.

“Everyone can’t go out and do their own thing,” Halley said. “It’s not a control issue. Someone needs to pull the pieces together, and I don’t think there’s going to be a lot of push back on NENA being the one to do that.” 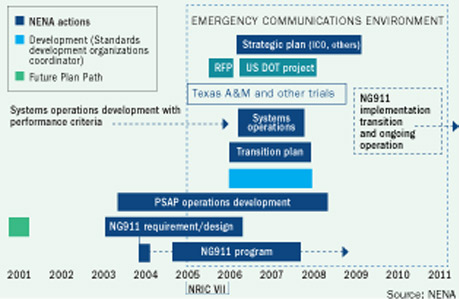