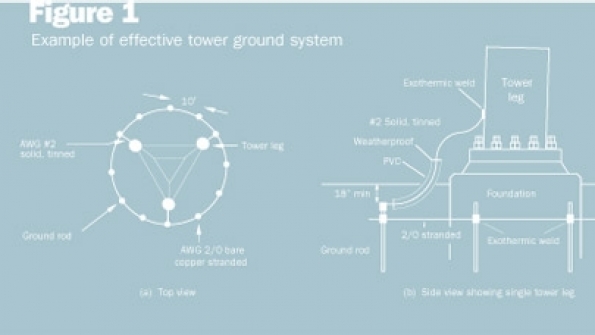 Few disciplines are dominated by as many myths and wives tales as electrical grounding. Everyone agrees that grounding is important to reduce the occurrence of lightning damage but, paradoxically, few sites have good grounds. This article describes some principles of good grounding.

There are three important reasons for proper grounding: ensuring personnel safety, minimizing radio frequency interference and preventing equipment damage from lightning. This article focuses exclusively on the lightning problem. Lightning is an impulse that can create instantaneous down conductor currents greater than 20,000 amperes. Because it is an impulse, a lightning surge produces alternating current with frequency content as high as 100 MHz.

A good ground is a low-impedance bond to an effective earth electrode system, which is a network of buried conductors around the tower designed to create a low resistance-to-earth. Tower earth electrode systems typically consist of a set of driven ground rods configured in a ring around the tower, with the rods bonded together by a large copper conductor (AWG size 1/0 or larger). Each leg of the tower should be bonded to the earth-electrode system using an exothermic weld. A typical tower ground system is shown in Figure 1.

Ground rods should be driven below the frost line, and all buried connections must be exothermic welded. In soils with poor conductivity, it may be necessary to use chemically treated rods rather than conventional copper-clad steel rods. The PVC pipe in Figure 1 insulates the surface soil from the lightning surge current, thereby reducing the step potential, a personnel safety hazard. (It generally is not a good idea to stand near an antenna tower during a thunderstorm.)

Real-world grounding systems often are quite complex when dealing with non-homogeneous soil conditions. Measurements are required to verify resistance-to-earth. Unfortunately, one cannot measure resistance-to-earth with a common multimeter. Specialized equipment and techniques are required. The preferred technique is the fall-of-potential method, illustrated in Figure 2. 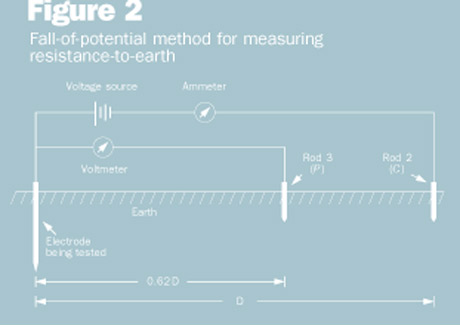 The resistance-to-earth of the electrode under test is simply V/I, where V is the voltage reading at the voltmeter and I is the current reading at the ammeter. The voltage source is usually AC, operating at a frequency that is not a harmonic of 60 Hz.

The correct reading is found when distance P is 62% of C [2]. It also is important that C be large relative to the largest dimension — the diagonal — of the earth-electrode system. A good rule of thumb is that the ratio of C to the system diameter should be at least 9 to 1.

Equally important as the earth electrode system is the down conductor bonded to it. Lightning creates alternating current in down conductors, so we are interested in the properties of down conductors at high frequencies. We recall that impedance, Z, consists of two parts, as shown in Equation 2.

We know that coils of wire have high inductance, but even a straight wire has some inductance. For example, a straight, 30-foot-long, No. 2 copper wire has an impedance of 9050 ohms — at ƒ=100 MHz — almost entirely due to inductance. To reduce inductance, we should avoid sharp bends, but we also can reduce inductance by creating more surface area. For example, a 3-inch-wide copper strap of the same length has an impedance of only 6900 ohms. Strap generally is a better down conductor than wire, but mechanical considerations often dictate that round conductors be used.

Let’s wrap up with some common grounding mistakes:

Installing down conductors from high on the tower: Installers are sometimes told they must install a copper down conductor from the antenna to the earth electrode system. The author has seen more than 200 feet of AWG No. 2 wire installed on a tower to meet this misguided requirement. True, copper has better conductivity than galvanized steel, but the impedance of the tower is much lower than No. 2 copper wire for two reasons: the larger surface area of tower members creates lower inductance and the multiple current paths to the ground create lower overall impedance.

Figure 3 depicts a similar mistake. Here, the installer mounted a bus bar about 10 feet above grade near the base of the tower. He bonded three down conductors to the bus bar, which is good, but he failed to bond the bus bar to a tower member. The large surface area and multiple paths created by tower members create a lower impedance path to ground than the three small down conductors. The concern here is that a lightning surge might find the coaxial cable to be a lower impedance path to ground (through the radio cabinet) than the three down conductors. A mitigating circumstance is that the bend in the coaxial cable creates higher impedance, making it somewhat less attractive to the lightning surge. 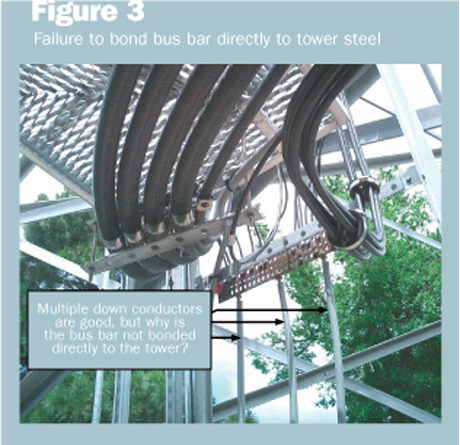 Failure to bond building structural steel to an earth electrode system: Copper and steel conductors embedded in concrete also create an effective ground. Such a ground system is called a Ufer ground (after its inventor, Herbert Ufer, who was a consultant to the U.S. Army during World War II). Too often, the designer fails to bring conductors outside the foundation for bonding to the earth electrode system. 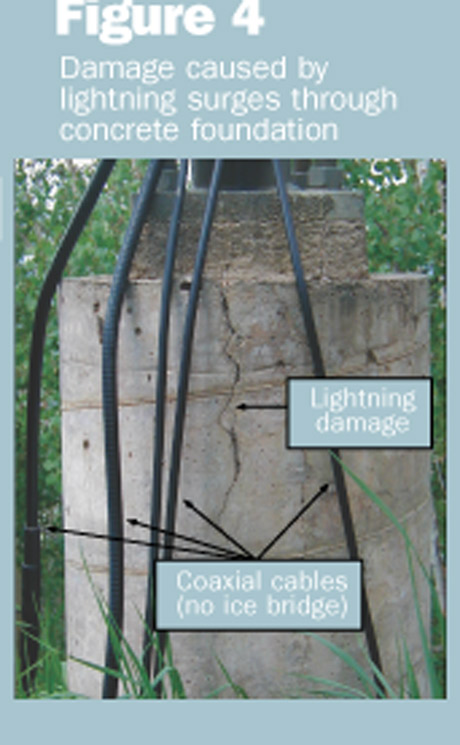 A word of caution: A Ufer ground consisting solely of the tower foundation is a bad idea. Lightning surges passing through the foundation can vaporize water in the concrete and damage the foundation through rapid expansion of steam. An example of this unfortunate event is shown in Figure 4. This particular tower had no earth electrode system, other than the leg foundations.

Failure to prevent conduit from acting as an RF choke: It is common for building codes to require that in-building, insulated (green wire) ground conductors be routed inside to the building ground through steel conduit. Unless the wire is electrically bonded to the conduit when it enters and leaves it, the steel conduit acts as an RF choke, presenting high impedance to alternating current, including lightning surges.

Space does not permit us to cover all the best practices for grounding, so the author recommends the industry and government guides listed below.