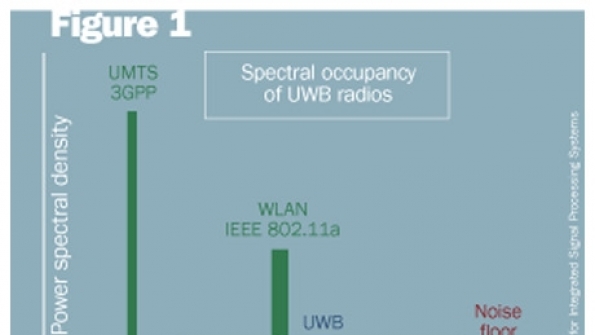 Connecting on a personal level

A personal area network, or PAN, is a computer network that enables communication between computer devices near a person. PANs can be wired, such as USB or FireWire, or they can be wireless, such as infrared, ZigBee, Bluetooth and ultrawideband, or UWB. The range of a PAN typically is a few meters. Examples of wireless PAN, or WPAN, devices include cell phone headsets, wireless keyboards, wireless mice, printers, bar code scanners and game consoles.

In the United States, PANs for the most part operate in two unlicensed bands: 902-928 MHz and 2.4-2.4835 GHz. Ultrawideband devices also can operate in the 3.1-10.6 GHz band, coexisting with other radio services by employing low overall power and ultra-low power densities (watts/Hz).

Let’s examine three of the most popular PAN technologies: ZigBee, Bluetooth and ultrawideband.

ZigBee is a short-range, low-power computer networking protocol that complies with the IEEE 802.15.4 standard. In the U.S., ZigBee devices operate in the 902-928 MHz and 2.4 GHz unlicensed bands. The technology is intended to be less complex and less expensive than other WPANs such as Bluetooth. Although ZigBee is a WPAN protocol, it also is used for telemetry applications such as automatic meter reading and building automation.

ZigBee employs direct-sequence spread spectrum modulation with a gross data rate of 40 kb/s in the 900 MHz band and 250 kb/s in the 2.4 GHz band. Advertised transmission range is from 10 to 75 meters, but like any radio system, the actual range depends on the environment.

There are three types of ZigBee devices: ZigBee Coordinator (ZC), ZigBee Router (ZR), and ZigBee End Device (ZED). The ZC is the most capable device, forming the root of the network tree and bridging to other networks. There is only one ZC per network. The ZR can run an application function as well as act as an intermediate router, passing data from other devices. A ZED contains just enough functionality to talk to its parent node, which is a coordinator or a router. It can sleep most of the time, extending its battery life.

The ZigBee Alliance is a trade organization charged with developing and publishing the Zigbee standard and promoting its use.

Bluetooth is a computer networking protocol designed for short-range, low-power communications in the 2.4 GHz unlicensed band. It was named after King Harald Bluetooth, ruler of Denmark and Norway in the late 10th century. Sven Mattison and Jaap Haartsen, both employees of Ericsson Mobile Platforms in Lund, Sweden, published the first Bluetooth standard in 1994. The current version of the standard is 2.1 and specifies gross data rates up to 3 Mb/s.

Bluetooth employs frequency-hopping spread spectrum modulation with a rate of up to 1600 hops per second using 79 different channels, each 1 MHz wide. Because the technology uses a spread spectrum signal and low power, it is less likely to cause harmful interference to other 2.4 GHz devices, such as Wi-Fi radios, that often exist in the same personal computer. There are three classes of Bluetooth devices corresponding to different transmit power levels. Class 1, 2 and 3 devices operate at up to 100 mW, 2.5 mW and 1 mW, respectively.

Bluetooth networks normally operate in a master-slave configuration. A master device can communicate with up to seven active slave devices, and this network of up to eight devices is called a piconet. Up to 255 additional devices can be inactive or parked, waiting for wakeup instructions from the master.

The technology implements confidentiality, authentication and key derivation using algorithms based on the SAFER+ block cipher.

The Bluetooth Special Interest Group is a privately held, nonprofit trade association organized to promote Bluetooth in the marketplace and to develop Bluetooth standards.

Ultrawideband is a radio technology useful for short-range, high-bandwidth communications that does not create harmful interference to users sharing the same band. By FCC definition, a UWB signal has a bandwidth that exceeds the lesser of 500 MHz or 20% of the arithmetic center frequency. Such a bandwidth exceeds all conventional spread spectrum radio systems, and the resulting low power density ensures the signal does not cause harmful interference. (See Figure 1.) 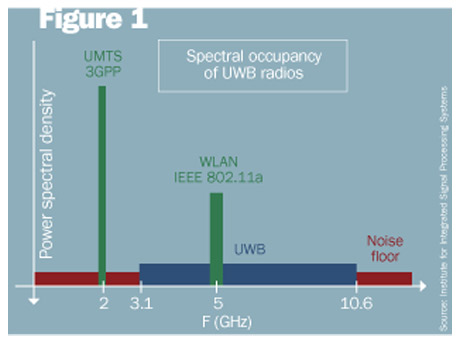 The FCC allows UWB devices to operate in the 3.1-10.6 GHz band. In this band, the emission limit is -41.3 dBm per MHz, which is the Part 15 limit for unintentional emissions in this band. Unlike conventional radios, which continuously modulate a sinusoidal carrier, UWB radios are short-duration pulse generators. The occupied bandwidth is roughly equal to the inverse of the pulse duration. The duty cycle of UWB signals is usually quite low, but the net throughput is still high because the burst information rate during the pulse can be more than 100 Mb/s.

A pulse-based UWB method is the basis of the IEEE 802.15.4a draft standard and working group, which has proposed UWB as an alternative physical layer protocol to ZigBee.

The WiMedia Alliance is a trade association organized to promote UWB and develop standards.

In addition to these three, other WPANs include Wibree, an ultra-low-power complement to Bluetooth; Wireless USB; EnOcean, composed of self-powered devices; and 6loWPAN, which allows IPv6 packets to ride 802.15.4 networks. These will be discussed in a future issue.

Jay M. Jacobsmeyer, P.E., is president of Pericle Communications Co., a consulting engineering firm in Colorado Springs, Colo. He holds BS and MS degrees in electrical engineering from Virginia Tech and Cornell University, respectively, and has more than 25 years of experience as a radio frequency engineer.