The main line loss is the insertion loss between the input and output ports. If a 50-ohm termination were connected to both the forward (FOR) and reverse (REV) ports, the main line loss would be the same in either direction — from input to output or from output to input. If a 50-ohm termination were connected to only one of the coupled ports, either FOR or REV, the main line loss no longer would be the same in either direction. However, for higher coupling factors, say 20-30 dB or so, the difference between the losses in opposite directions is negligible in practical applications. The coupled port that is terminated with a 50-ohm impedance becomes the isolated port. In a three-port directional coupler (as opposed to a bidirectional coupler) the fourth port is not made available externally but is terminated internally in a 50-ohm resistor. An internal termination generally provides a better impedance match and results in a better directivity figure.

For 20 dB coupling and substituting 20 for C in the formula yields a figure of 0.044 dB. For 30 dB coupling the figure is 0.0043 dB. Coupling affects the main line insertion loss from input to output because any signal appearing at the coupled port(s) is taken from the signal at the input on the main line.

Referring to Figure 1 and assuming a coupling factor of 20 dB, if a signal at a level of 0 dBm is applied to the input, the level appearing at the FOR coupled port will be -20 dBm. If the connections to the signal generator and the RF voltmeter were reversed, the RF voltmeter would still indicate -20 dBm; that is, the coupling between the input and forward ports is bidirectional. The output and reverse ports are terminated in 50 ohms. It is always a good practice to terminate unused ports in 50 ohms (assuming a 50-ohm system). Referring again to Figure 1, the signal generator could be connected to the output port and the RF voltmeter to the reverse port and the results would be the same. Again, unused ports are terminated in 50 ohms.

To determine the effect of these contaminants, the power levels are converted to voltage levels (in 50 ohms) and then analyzed using phasors. Figure 4 shows the various voltages and the resultants. The voltage at A represents the voltage in the 100 W forward signal. The voltage at E represents the voltage in the 10 W reflected signal. The voltage in the contaminant signal that is 25 dB down from the reflected voltage (E) is shown at B. At one point, the phasors representing the desired and contaminant signals will be in phase and will add directly. This is shown at C. At another point, the phasors will be 180° out of phase and will subtract directly. This is shown at D. At other phase relationships, the voltages will be combined vectorially and will fall between these two extremes. Similarly, a contaminant from the forward signal is shown at F and is 25 dB down from A. The sum and difference of E and F produces the resultants G and H.

As mentioned earlier, some directional couplers provide only three ports. In this case, the third port is simply labeled the “coupled” port instead of forward or reverse. The fourth port is terminated internally with a near-perfectly matched 50-ohm resistor. In this case, the fourth port is not available externally and therefore is not really considered a port, as such.

The obvious disadvantage of this arrangement is that a sample of both the forward and reflected signals is not available simultaneously. Connections have to be switched to measure one and then the other. Directivity measurement requires a comparison of the signal level at the coupled port with the signal generator and load connected to the input and output ports respectively, and then with the generator and load connections reversed.

Dual-directional couplers can be fashioned by connecting two three-port couplers back to back. The two output ports are connected together. This provides two coupled ports that can be used for simultaneous monitoring of the forward and reflected signals. The two remaining ports are both labeled “input,” but either can be used as input or output.

Coupling flatness is sometimes referred to as frequency sensitivity. It is a measure of how much the level at the coupled port changes over a specified frequency range with the signal level at the input port held constant. An example might be ±0.5 dB from 5 to 300 MHz. 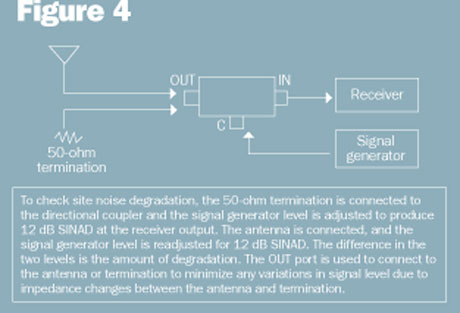 Figure 4 shows a typical use for a three-port directional coupler. Directional couplers can be used for a variety of test-and-measurement procedures. As a rule of thumb, when using a directional coupler to measure voltage standing wave ratio (VSWR), the directivity of the coupler should be at least 20 dB greater than the return loss (VSWR) to be measured. For example, if the return loss to be measured is 20 dB, the directivity of the coupler should be no less than 40 dB. When this is the case, the measurement error will be no greater than 1 dB.

Until next time — stay tuned!