Back in a big way

Non-terrestrial communications are enjoying a revival; here's how they work.

In the 1960s and 1970s, overseas telephone often calls were routed over geostationary satellites. Because a geostationary satellite orbits at 35,800 kilometers (22,250 miles) above the earth and because radio waves travel at the speed of light (3 × 108 m/s), there is a 540 millisecond round-trip delay for satellite telephone calls. Most callers found this delay annoying because the normal interruptions that occur during phone conversations are not recognized immediately by the listener and users tended to talk over each other. As transoceanic fiber optic cables appeared and costs dropped, telephone calls moved from satellite to fiber. Satellite voice communications then became the exclusive domain of the military and ships at sea. Broadcast television took over as the dominant application for commercial satellites and it remains so today.

By the early 1990s there already were millions of cellular phone users, but coverage was limited to urban areas and most third-world countries had no cell phone service at all. Start-ups Iridium and Globalstar recognized the potential for handheld satellite phones and they launched constellations of low earth orbiting (LEO) satellites that would hand off calls between satellites to maintain call continuity. Because these satellites operate between 800 km and 1,500 km above the earth, the round-trip delay is tolerable and both companies achieved some short-term success. In the meantime, terrestrial cellular networks continued to expand and the price of cell phone service dropped rapidly to the point where Iridium and Globalstar could not compete. Both companies declared bankruptcy and are now operating under new ownership, free of the enormous debt that crippled their original operations.

Direct broadcast radio and television satellites such as Sirius XM, DirecTV, Echostar and ICO-G are for the most part one-way communications links and outside the scope of this article. 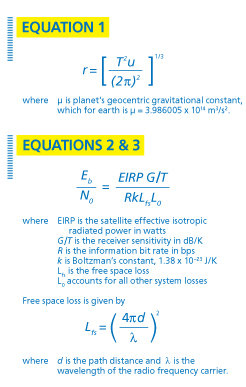 The principles of orbital mechanics were first discovered and explained by Johannes Kepler in the 17th century. Kepler found that the radius of a circular orbit as a function of its period T is given by Equation 1. For a 24-hour circular orbit (86,400 seconds), we find from Equation 1 that the orbit’s radius is 42,241 km. Because the mean earth radius is 6,371 km, the orbital altitude is 35,870 km. In contrast, Iridium’s orbital period is 100 minutes and 28 seconds, the orbital radius is 7,158 km, and the orbital altitude is 787 km.

In general, satellite orbits are elliptical and have some non-zero inclination relative to the equator. Satellite engineers define orbits by six orbital elements referred to as the Keplerian element set. The six orbital elements are the semi-major axis, eccentricity, mean anomaly, argument of perigee, inclination, and right ascension of the ascending node. For definitions of these terms and more information on satellite orbits, see “Satellite Communications,” 4th Ed. by Dennis Roddy.

An orbit of particular interest to communications and broadcasting is the geostationary orbit. A geostationary orbit has a period of 24 hours, travels in the same direction as the earth’s rotation (eastward), and has an inclination of zero degrees. Because the orbital period is the same as the earth’s rotational period, the satellite appears stationary to an observer on earth. The position of a geostationary satellite is specified by its longitude (latitude = 0°) and the pointing angles for an earth terminal (elevation and azimuth) can be calculated from the latitude and longitude of the earth terminal using the Great Circle equations and planar geometry. In practice, there are no truly stationary satellites because gravity from land masses in the northern hemisphere gradually pulls the satellite into a slightly inclined orbit. This inclination causes the satellite to trace a figure eight (as observed from the earth) and periodic station keeping is required to minimize the maximum inclination over time.

The link budget for a satellite is similar to a terrestrial microwave link except that the downlink (satellite to earth) and uplink (earth to satellite) parameters may differ. Also, unlike microwave receivers, the sensitivity of earth stations is specified by the figure of merit, G/T, which combines receive antenna gain and receiver noise temperature. Noise temperature and noise figure (NF) are related by T = 290(NF-1).

Nearly all modern satellite links are digital and the ratio of energy per bit to noise power spectral density (Eb/N0) is the usual measure of signal-to-noise ratio at the ground receiver. The minimum required Eb/N0 for reliable operation is a function of the maximum tolerable bit-error rate and the particular modulation and coding scheme used. A typical minimum Eb/N0 for the DVB-S standard is 8 dB. The Eb/N0 is calculated using Equations 2 and 3.

Consider a downlink link budget for the WildBlue service. The parameter values and calculations for Eb/N0 are shown in Table 1. Note that a link margin greater than 0 dB is important to account for foliage or precipitation losses.

Most satellites are bent pipes, meaning that the uplink signal is received, amplified, translated to a downlink frequency, amplified again, and directed toward the earth using a high-gain antenna. A bent pipe satellite does not demodulate and decode the signal. A gateway station on the ground is necessary to control the satellite and route traffic to and from the satellite and to the Internet. A gateway station also provides the feeder link to route traffic from a landline network (e.g., the Internet) to subscribers. Separate frequency pairs are normally used for the feeder links. Geostationary satellite systems operating in the Ku and Ka bands (12/14 GHz, 17/24 GHz) typically employ geographical spot beams to reuse frequencies across North America. Figure 1 depicts a typical satellite architecture similar to HughesNet or WildBlue.

Some satellites, like Iridium’s, are digital repeaters that demodulate and decode the uplink signal. Iridium also employs satellite cross-links that allow the constellation to operate with fewer gateway stations on the ground. This feature is important for an LEO satellite network because each satellite sees only a small part of the earth and numerous ground stations would otherwise be required. Another important feature of LEO networks is doppler frequency correction. LEO satellites move at such high velocity that doppler shift becomes a problem in the receiver. Either the ground receiver must have a very wide IF bandwidth, which degrades sensitivity, or the satellite transmit frequency must be corrected for doppler shift. In the case of Iridium, the doppler frequency is corrected at the satellite transmitter and receiver after the position of the subscriber radio is known. Correcting doppler at the satellite enables lower-cost handsets.