The severe economic downturn is forcing first-responder agencies to rethink their strategies.

From households to corporations to governmental entities, the woeful economy is impacting budgets of all shapes and sizes, and the first-responder communications sector is no exception. For some agencies, the financial downturn has forced managers merely to tighten their belts; for others, fiscal shortfalls are necessitating significant changes in long-term strategies.

At a minimum, discretionary spending has been drastically cut throughout the sector. Stories of travel budgets used to attend trade show and educational meetings being slashed are commonplace; in some cases, even approved travel has been nixed because the personnel shortages — the result of layoffs and hiring freezes — dictate that responsibilities on the home front are so great that manpower resources cannot be spared, even for a few days.

For mandatory items, every penny is being scrutinized. Those running regional or statewide systems are seeing customers become increasingly detailed in their analysis of charges and their consideration of various rate plans that might allow entities to save precious dollars.

While such short-term actions might be expected, the severity of the economic downturn also has caused many governmental entities to reassess their big-picture communication strategies and rethink specific projects.

One example of this is in the state of Missouri, where newly elected Gov. Jay Nixon in January placed under review an $81.7 million contract with Motorola to build a state public-safety communications system — a deal approved just a couple of weeks earlier by a lame-duck administration — along with other long-term contracts. To date, the matter is still under review, complicated by a protest from rival vendor Tyco Electronics Wireless Systems (nee M/A-COM) that the original award to Motorola was unfair.

“We are facing an economic situation in Missouri — like in other states — where we have to look at ways to make government more efficient, and this is part of the governor’s plan,” Nixon spokesman Scott Holste said. “There’s certainly not a question of the need for having an effective system. The question is whether this particular contract will fulfill that need in the most efficient manner possible.”

Meanwhile, Tyco Electronic — recently purchased by Harris (see “Harris to buy Tyco LMR unit“) — claims its attempts to build a $2 billion statewide wireless network (SWN) in the state of New York was undermined by that state’s well-chronicled budgetary shortfall of more than $20 billion.

New York officials steadfastly assert that the state terminated the contract because the initial buildout of the system failed multiple tests, but the vendor has stated in litigation that the termination was “clearly the result of unreasonable and improper actions and contrivances of the [New York Office for Technology], coupled with the unprecedented New York state budget crisis, rather than any material failure of M/A-COM to comply with its contractual obligations.”

Since the lawsuit was filed, the state of New York has announced plans to pursue a “bottom-up” strategy that would leverage existing P25 networks in a “system-of-systems” approach that is expected to be much less expensive than the original SWN proposal.

Meanwhile, several communications representatives of public-safety entities have expressed concern about plans to migrate from legacy UHF or VHF systems to new 700 MHz narrowband networks or — as is the case with the New York City Police Department — a 700 MHz broadband network (see “A Big Voice in the Big Apple” in the March issue of Urgent Communications). These plans typically called for the building of a 700 MHz system during the next few years, thereby allowing the licensee to avoid the cost of revamping the UHF/VHF network to meet the FCC’s narrowbanding deadline of 2013.

Given the economic crisis, the odds of securing financing — especially if a bond election is required — to build a 700 MHz network before 2013 are slim. As a result, these entities are faced with the prospect of paying money to meet the narrowbanding mandate that could have been earmarked for a new 700 MHz system.

One source of hope for many public-safety agencies in such situations is the influx of grant money that is available through federal agencies such the Department of Homeland Security (DHS) and the National Telecommunications and Information Administration (NTIA).

But many public-safety agencies in states like California are finding the conditions associated with the grants — for example, the 20% local match for the $1 billion set aside for the Public Safety Interoperable Communications (PSIC) program — to be much tougher to meet in today’s climate than was expected when proposals were made more than a year ago.

“It’s particularly a problem for smaller agencies,” said John Powell, chairman of the National Public-Safety Telecommunications Council’s interoperability committee. “If you’re a city that’s looking at having to lay people off — especially first responders — you’re not going to pay for the match.”

While that may be the politically expedient path to take, postponing or canceling technology plans for the sake of saving personnel may not prove to be a good long-term decision, said Morgan Wright, Cisco Systems‘ global industry solutions manager for public safety and homeland security.

“Probably the most emotional decision is, ‘Do we invest [revenue] in people or do we invest it in projects?'” Wright said.

As a former police officer and supervisor, Wright acknowledged he “would have hated to see any of my folks lose their jobs” but said an investment in technology can be a more cost-effective method to maintaining service levels, especially during times when money is tight and entities are reluctant to add to personnel costs.

“That could mean that, rather than hiring two people, you take that money and instead invest it in technology,” Wright said. “Why? Because hiring two people will allow you to survive for awhile, but those positions aren’t sustainable. It would be more sustainable to maintain the level of staffing and fully support them and give them the tools and technology they need to be more efficient.” 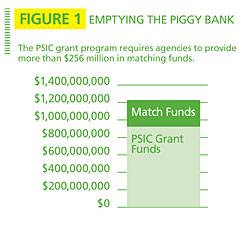 Powell said efforts are underway to help public-safety avoid having to make such choices regarding PSIC grant money. Proposals range from allowing the pooling of matching funds on a regional basis to extending the implementation deadlines to the outright removal of the matching requirement, although the last notion could create a potentially sticky situation that could create further delays.

“The only issue I’ve heard with doing away with the match is that some agencies have said, ‘We didn’t put in [an application] for this, because we knew we couldn’t come up with the match, so you need to put it back on the street again if you’re going to do away with the match and let the process run again, so we can get our fair share,'” Powell said.

Meanwhile, Wright said the difficult economic times could result in the development of more communications systems that serve more than a single public-safety agency — a convergence model that Cisco had advocated long before the economic crisis hit.

“Instead of five agencies each spending a dollar to go build something, they’re having to pool their money now,” he said. “Instead of spending $5, they’re spending $2 but getting the benefit of a combined infrastructure that they share.”